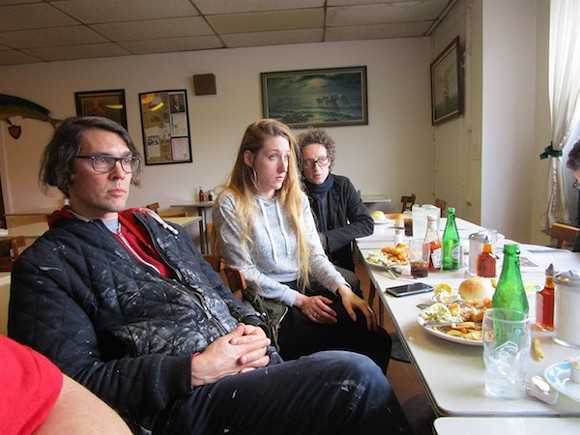 Artist Ryan Mendoza got more than he bargained for with his Detroit-themed art project.

Unless you’ve been utterly unplugged for the last week or so, you’re probably familiar with the artist’s “White House” project, for which he moved a house (well, the exterior of it, at least) to Europe to be painted, decorated, and exhibited as art. That was a smash hit, and drew more than 25,000 visitors to see the artwork in Rotterdam. Here in Detroit, the artwork was mostly noted via a cycle of stories faulting the artist for not having what remained of the structure torn down. (In the media dogpile that ensued, even we leaped on a bit.)

The controversy couldn’t have happened at a worse time. The Mendozas were flying back to Detroit last week when they learned about the article, which had left a firestorm of criticism in its wake. They had thought they were coming back for a week of art happenings on Stoepel Street and to attend tomorrow’s Freep Film Festival. Instead, they were facing very public criticism, and neighbors on Stoepel who, as the article put it, didn’t “really seem in the mood for a celebration.” (The article even enlisted a genuine Kresge fellow to huff about outsiders, and issue a scolding in their general direction: “If you just show up, expecting to snap your fingers at stuff and have things run the way you're used to, you haven't observed the surroundings enough to understand what the real issues are.") 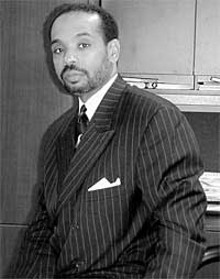 The article also mentions that Mendoza says he paid contractor Harley K. Brown to take the structure down. That name rang a bell with us right away, and should have set off alarm bells for all involved. More than a decade ago, MT’s own Curt Guyette wrote a series of stories about Brown and his troubled business ventures, again and again and again.

At this point, any reasonable person would forgive the Mendozas for landing at Detroit Metro Airport, immediately buying a return ticket home, and refusing to ever come back to Detroit again.

Luckily, they didn’t, or we wouldn't be able to spend about an hour on a cloudy Thursday afternoon with them, along with a few Brightmoor people, including one-man neighborhood watch Jonathan Pomerville. Seated in the back room at Scotty Simpson’s Fish and Chips on Fenkell, Ryan and Fabia are remarkably gracious about everything as they tell their story. They’re taking it all very well. It’s apparent that they’re not used to managing perceptions, that they’re used to being well-liked. When he mentions that he paid $9,450 the day before for the property's emergency demolition the Brightmoor folks groan and interrupt him to demand he sue the “contractor.” With a zen calm, Ryan says he won’t. In fact, he starts talking about redemption. He even starts quoting Maya Angelou. He appears to be utterly sincere.

As you might have guessed, the official agencies reacted somewhat coolly to the project. Our cultural ambassadors, however, were eager to meet these people with the unusual plan. The couple wound up being introduced to dozens of Detroit mainstays, from Tyree Guyton to Tommy Hearns, until they wound up putting their faith in the smooth-talking Brown.

Sitting at the west side fish and chips joint, Ryan says, “I was under the impression that he was a millionaire and that he had a demolition company. He just said he wasn’t able to demolish the house because he said he had a cold. Or because it was cold because of the winter. It turned out he didn’t even have a demolition company.”

But hadn’t they done their research and seen the businessman’s checkered past? Yes, they had, and they pushed ahead anyway.

Ryan looked at Brown’s past and came to an unusual conclusion: “I thought a man who’d done that would need a nice story, a feel-good story, to get his credibility back. I would never imagine that he would, for such a modest amount of money, consider doing something that would make him look really bad. It made no sense.”

Fabia’s take on Brown is more measured. “I never really trusted Harley on the business part of things,” she says. “But he opened up a door to understand the city deeper. Rather than just to do it, to come here, hire a major demolition company, like Adamo, pay them a lot of money, take the house, not care about anything and just leave.”

They’re less forgiving, however, of the treatment they’ve received at the hands of the media. They proffer phones, show images of the finished artwork, stress that it’s not about blight. It’s about love. It’s about memory. It’s respectful of the people who lived in the home. Fabia shows an image of the house wrapped in canvas, with the word “unforgotten” written on it in cursive. She asks me if that looks like art created to disrespect a community, to capitalize on “ruin porn.” It doesn’t. In fact, the couple’s description of the art house, which has been seen by thousands already, seems every bit a loving tribute to the family that lived there.

It’s touching that Ryan seems most concerned that his art not be misunderstood. The money paid to Brown will not be requested back, he says. The money willingly paid to the city for the final demolition they both consider “a symbolic act.” They’re just getting over the whiplash of being turned, burned, and blamed.

“Everything I knew about the story has changed in two days,” Ryan says.

“I’m thinking these people are insane,” he adds. “I was thinking, 'what’s the problem with going to the neighbors?'”

“I didn’t realize that they weren’t insane,” he says. “It was that I was a fool.”