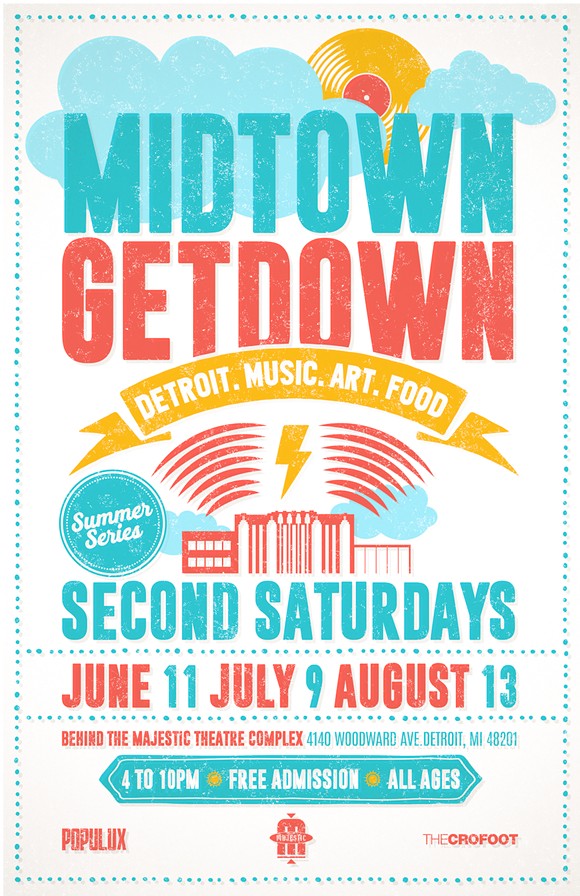 Just when you thought you had your summer activities planned, a new music and arts festival is coming to Midtown and you will want to make sure you are ready and able to attend this summer bash.

Instead of just one weekend of music, art, and food, the promoters of the event decided to stretch the festival all throughout summer and have three different dates - the second Saturday of the month to be exact. June 11th, July 9th, and August 13th will be the dates for the first ever Midtown Getdown.

The event is being brought together by a number of different promoters. The Majestic Theatre, Populux, and The Crofoot are all coming together to put on this new and special festival. The festival - which will be held in the parking lot behind the Majestic - will feature 5 different band thorough out the day, craft beer tents, craft whiskey tents, art instillations, local food vendors, and pop-up shops from artists and funky store owners. Populux will even be offering their crazy-cool Deep House Yoga.

In reality, there is something for everyone. Speaking with festival promoter Amir Daiza about the event, he said all of the promoters are super stoked for the new festival.

"It's about not only bringing people together who love music, art, and food, but to show off how great of a neighborhood Midtown has become."

What sets Midtown Getdown apart from other festivals that happen during the summer is that it will happen three times this summer. So in case you're vacationing in Traverse City at Cedar Point for one of the weekends, you have two more opportunities to check out all the buzz that Midtown has to offer. And did we mention that the entire festival is free? (Well, besides booze and food, but that's a given.)

Be on the lookout for more information about Midtown Getdown including bands performing and food vendors. Get pumped!