April 26, 2016 at 2:13 PM
comment
Just what is implied in a couple tweets between Dan Gilbert and Pistons owner Tom Gores? That's what several news outlets are wondering this afternoon in the wake of a Twitter exchange between the two billionaires. 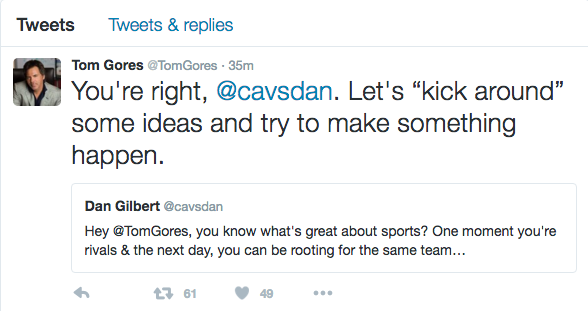 Gores, of course, has hinted that he will be looking for a way to have his Pistons, who've been out in Oakland County for more than 25 years, become more involved in Detroit, although he has stopped short of saying he intends to build an arena. In fact, soon after the Pistons hired former sports agent par excellence Arn Tellem, reports were the dealmaker was in communication with the Ilitch organization, perhaps to discuss a shared arena with the Red Wings.

And recent rumblings that Major League Soccer could expand into Detroit gives some credibility to the idea that today's tweets concerned a Gores-Gilbert soccer syndicate.

The fact that the two image-conscious billionaires are playing footsie out in the open would seem to mean that a deal has been struck. In fact, ESPN's Marc Stein has tweeted a link to an article with a firmer description of an actual deal. We're sure more of the details will soon be forthcoming, including where the team will play, what it will be named, what it will be hastily renamed, and how many millions of dollars the public will be on the hook for.