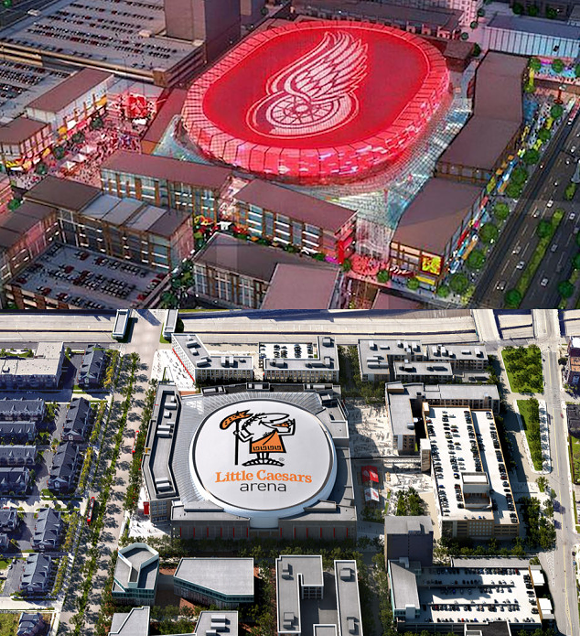 Word that the new hockey arena downtown will not feature the state-of-the-art glowing LED roof inspired by the roof of the Bolshoy Ice Dome at the Sochi Olympics has some sports fans feeling a bit of buyer’s remorse this week. You no doubt remember that the high-tech roof, which was conceptualized by Baltimore-based Barnycz Group, was front and center in the renderings offered by Olympia Development, and wowed fans of the city’s hockey team when it was introduced a few years ago. Now that the actual roof is being installed, we learn that the impressive design was "a placeholder," and nothing more.

Frankly, there’s nothing new about this sort of "now you see it, now you don't" game that goes on with renderings. The fact is, finished buildings seldom look like the renderings that helped sell them. The dapper crowds often don’t materialize. The parks sometimes become parking lots. The ancillary development almost never looks as good as it was supposed to.

That said, a lot of buildings aren’t publicly financed the way the new hockey stadium is, and so the public doesn’t often get the opportunity to feel that it was misled. And it’s growing increasingly apparent that plenty of fans think the LED switcheroo is a bunch of horse hockey.

But that impressive feature wasn’t part of any contract, after all. All the negotiations leading up to the new stadium were done privately with public officials. The Ilitches never signed anything promising that the finished stadium would look anything like that. All it was, in fact, was a picture. You know: A drawing. Somebody created an image to offer sports fans that would connect with them emotionally and make them think the stadium was going to be sweet as fuck. And, trusting that the Ilitches were honorable people, Red Wings fans gave it a gung-ho reaction that largely provided the momentum to push through a deal that saw the public financing more than half of the total project.

So do fans have a right, now, to be angry? In the absence of any contractual agreement?

Let’s say you were given a sales presentation on a new car, a pricey one, but one with the logo of your favorite sports team rendered in LED lights right on the hood. As any savvy salesperson knows, sometimes you need just a little bit of bling to help persuade a potential buyer that, though it’s extravagant, it’s worth the price tag. Let’s say this is enough for you to take money that was set aside for something really important, like repairing your driveway or your children’s college fund, to get this sweet whip right now.

Now imagine that the finished automobile is delivered to you, and instead of a shimmering display of NHL fandom on the hood, it’s the logo of the pizza place down on the corner? How would you feel? You were expecting to get oohs and aahs from your buddies when you pulled up at the bar on Saturday night; now you can expect chuckles and knowing grins, and calls of “Hey, pizza boy!”

Yup, you’d be fucking pissed. And when the salesperson pointed out the fine print in the agreement which showed that you had no right at all to expect what you were sold, and that the pizza logo has to stay, it would not be unreasonable to expect you to wrap both hands around the salesperson’s throat and start wringing.

Perhaps that helps explain the emotional reaction many sports fans are having this week.

Now, this is exactly what some people call a “teachable moment.” This week, sports fans, you are fully aware that the people who come to you with smooth pitches for fantastic sports palaces are incapable of being honest with you. The next time a billionaire or two comes to you proposing a public-private partnership for a new stadium, tell them to get bent. Tell them you’re tired of footing the bill for promises that never get fulfilled. Tell them you’re sick of paying for a product that you don’t get, even though you’re promised it again and again.

Then again, in a town full of Lions fans, that might be too much to ask.