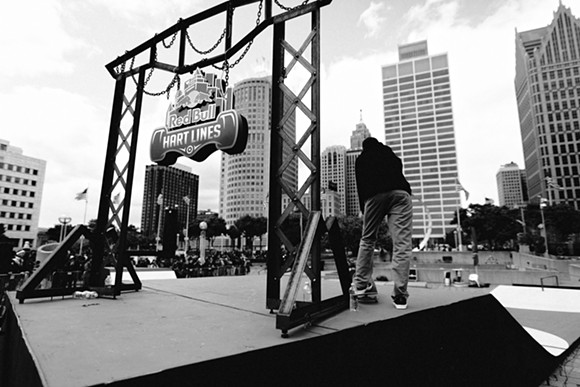 The hardest part of anything you do is trying to figure out where to begin. In the short few days that the Red Bull Hart Lines skateboard competition took place, enough insanity occurred that stories could be told for days on end.

That being said, I’m going to give my best effort to skip key points that aren’t related directly to the competition. In that effort, many gnarly things are going to be undeservedly overlooked. Random things like a mini riot of thirty-plus skateboarders (and one drunk middle aged man) facing off against overzealous and very physically confrontational Hart Plaza security, eventually having to be dispersed by Detroit’s finest PD. The Michigan weather also decided to come out and remind us that it is above all things. Yes, even above Red Bull, as the first day of the contest had more than its fair share of rain delays. 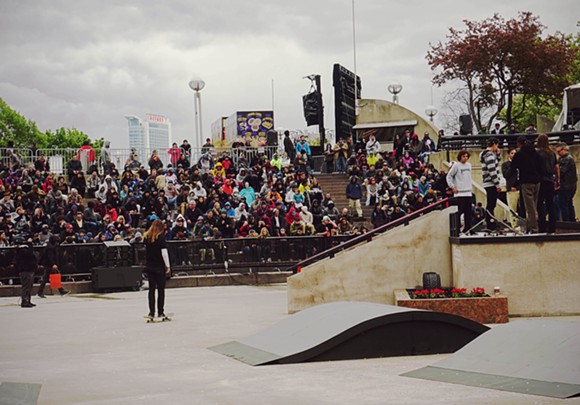 After a few weather holds and a team of people equipped with propane torches and squeegees, the course was successfully dried, only to be swiftly evacuated by a hail storm not long after. One day Red Bull will probably have a machine that can control the weather at their events, but for now, we are at Mother Nature's mercy.

The pros killed it skateboarding all weekend long despite the wind and cold, considering the majority of them call 'warm and sunny all the time' California, their home. The “Motor City Grind Shop Battle” aka the Hart Lines local skate shop competition also took place, and saw Plus Skateshop come out on top. Brent Behm and Pat Galloway were the locals who put down solid runs and led their skate shop sponsor to victory. It’s worth noting local Jalen Noel unanimously won every style category based off his jogging pants attire alone.

The professional competition, as always, is far more heated and the skateboarders did not disappoint. Nyjah Huston came out on top and claimed first place (which is no surprise to anyone who skates, the boy bought a Lamborghini off of what he can do on a skateboard), with Curren Caples in second, followed by Axel Cruysbergh in third.

It's a difficult task to explain skateboarding to people who do not skate, when you do yourself. It’s all too easy for me to sit here and say how Nyjah’s last run was so insane that he did a crooked grind nollie-flip down a long 5 stair circle rail, but most of you have NO IDEA what any of that means. I’d be better off to say he went really fast, jumped up on a handrail on the front of his board and then flipped it on the way out. That description just sounds so ridiculous, lengthy, and uninformative when you actually know whats going on.

Long story very short, all of these guys came out and killed it on a skateboarding level, as well as on a human level. I probably witnessed more autograph signings here than any show or concert I have ever attended and never once saw any of the skateboarders let down one of the kids asking, even when there was an excessive amount of little fans screaming “SHECKLER!”

Despite all of the corny presentation and forced broadcast media that for some reason always comes with this caliber of event, I would say Hart Lines was an overall success, and it’s exciting that they choose to do it in Detroit. To me, one of the things that was really interesting about this competition was how many people came out who knew NOTHING about skateboarding and were in awe at what they were witnessing. It really helps to put an event like this into perspective and make you appreciate the incredible skill level you are surrounded by. It’s easy to be desensitized to things like this when we’ve all seen every insane skateboarding clip imaginable on the internet, but at the end of the day you have to approach it with the same eyes as all of the little kids in the crowd. At the end of the day, if you look at it for what it actually is, people are jumping down large sets of stairs and onto rails on a piece of wood with four wheels and a very simple turning system. That in itself is impressive enough, let alone the fact that skateboarding’s Kobe Bryant is the one you are witnessing in person. Did I mention he bought the Lambo? Off of the skateboarding money?

It was definitely a nostalgia-filled weekend witnessing all of this for someone who has been in so many skateboarding contests in the past, but it feels so much crazier to see it and experience it happening in Detroit. Whatever long talked about “change” that’s happening in Detroit isn’t all bad, a lot of cool moments like this one bring some positive light to the cities oft-talked about future. It also seems like a worthy check mark on a resume for a city that is soon to make another bid to host the Summer X-Games.

Ironically enough, the guys at “the Boardr" who situate and helped host Hart Lines are also involved with the X-Games camp, so maybe this weekend will help to further line up action sports events in Detroit’s future. We all know how crazy the X-Games to Detroit parties and videos went. We see you out here ASSEMBLE sound, holler at me and lets get another X-Games to Detroit video going, the city wants it!