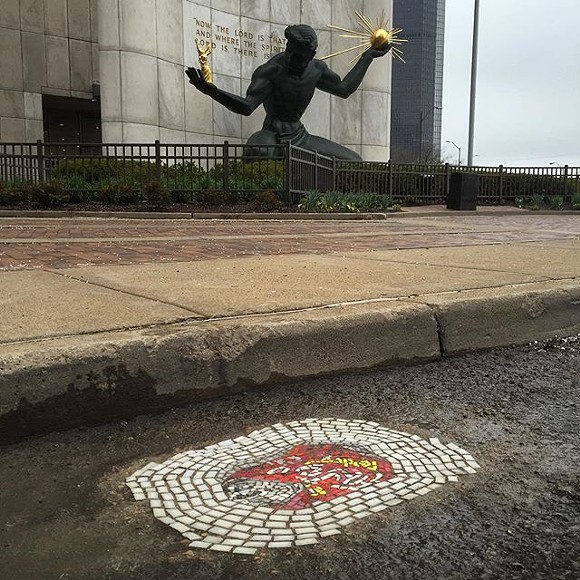 Can potholes be beautiful?

They can after Chicago-based artist Jim Bachor gets through with them. His mosaic patch jobs turn roadway hazards into art installations in what is perhaps the most literal take on street art we’ve ever seen.

Bachor, a Detroit native and graduate of the Center for Creative Studies, trained in the art of mosaic in Italy, where he learned ancient techniques that have endured for thousands of years. It was that permanence that inspired him to apply the art form to the streets.

“What I decided to do was combine this very indestructible, permanent art form that I had a passion for and try to solve the pothole problem by applying a piece of mosaic art in the pothole in front of our house.”

That first installation launched a campaign of pothole mosaics that spread from Chicago to as far away as Finland, where Bachor created mosaics in a half-dozen potholes in the city of Jyväskylä.

And now his work has come to Detroit.

As part of his 2016 campaign, “Pretty Trashed=," Bachor recently installed a mosaic of a crushed Faygo can on Woodward in front of the Spirit of Detroit statue. The mosaic is the third in this year’s series, which has a decidedly more local angle than 2015’s “Treats in the Streets” collection of vintage ice cream designs.

“I like to bend the campaign to the local, and if I can do something that would appeal to the local folks, I do that.” Bachor said. “The first two pieces of the campaign are in Chicago: They're a Miller Lite beer can and a parking ticket. And so when I came to Detroit, I customized it to a Faygo Redpop can because obviously Faygo is a Detroit-based company.”

While the permanence of these roadway mosaics may never approach that of the ancient murals that inspired them, Bachor says they can last indefinitely … under the right conditions.

And for as long as they do last, they're a welcome bit of whimsy in the most unexpected of places.