'Coming to America' is Going to Prom 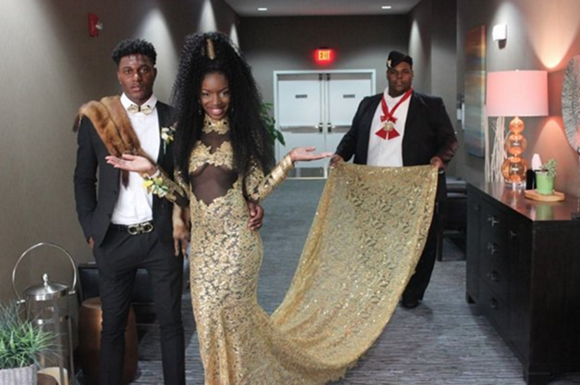 Over the past five years, “promposals” have been all of the rage around this time of year. They have been catching the attention of people ranging in age from 12-year-olds with iPods and 40-year-olds with a heart of nostalgia.

There is just something incredibly interesting about a 2-minute video full of young love and emotion for one of the most *exciting* times in high school life (I guess).

In Benton Harbor recently, there was a clip of something a bit more extravagant than the regular promposal.

In fact, it wasn’t a promposal at all. Blac Detroit editor and How to Live in Detroit without being a Jackass author Aaron Foley reported earlier that students at Benton Harbor posted a less-than-one-minute video at prom re-creating a scene from Coming to America, and it’s getting some attention.

The portion from the movie that these students decided to portray was the “She’s Your Queen to Be” scene, and it’s close to perfection.

Do you remember that jaw-dropping dress Vanessa Bell Calloway wore?

Well, the woman in the video is rocking a dress just like it, and she fucking slays. She is drop dead gorgeous sporting that shimmering gold gown with the matching bangles holding her ponytail high.

Paired with a man who resembles Prince Akeem with the fur piece draped over his shoulder and an accompanying friend singing the entrance song, these students created a prom appearance that won’t be forgotten.

With Coming to America acting as both a romcom and an impactful film portraying African wealth in an industry where that was unheard of for decades, these students re-created a statement while looking good and having fun.

Maybe if there were more re-enactments of scenes from movies (or any type of art, really) at proms and homecomings, I would have given high school dances a chance they could potentially deserve, because this stunt was worth it.

This short video was worth three hours of awful music and sweat dripping eyeliner. It was worth the crying melodramatics and bad dancing because watching Prince Akeem and Imani Izzi dance in the flesh would be more than enough entertainment for one night.