12 summer 5ks for people who only 'kinda run'

by Luanne Lim and Alexandra Fluegel 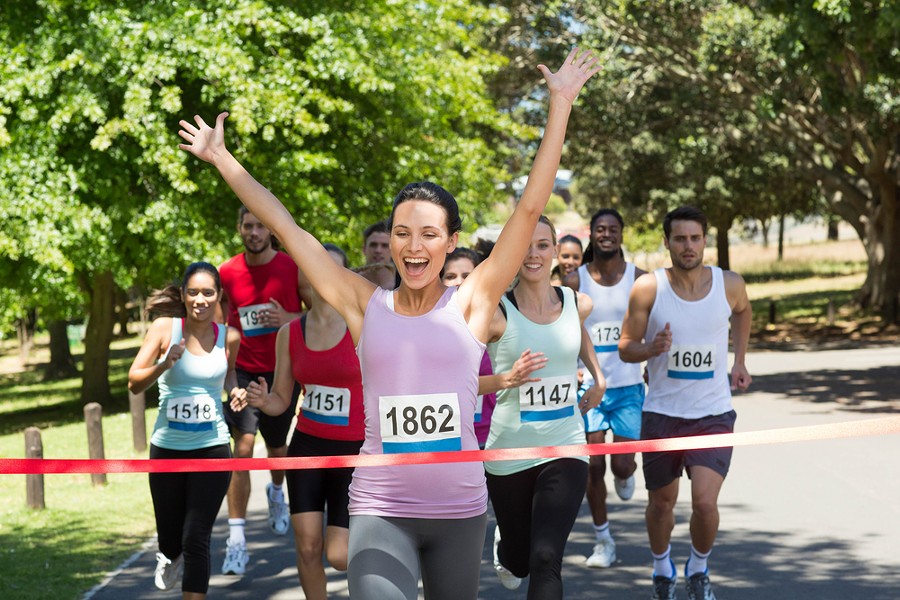 Summer is the season for relaxing and getting some downtime. For some, however, it's the season for running. As in marathons and other exercise-related activities, and while these people usually sometimes frighten us, it's not the worst idea to get out and get active when we're not buried in snow.

We know what you're thinking, dude, I smoke a pack a day, my lungs are totes not having this running shit, to which we say YES YOU CAN. Because hey, what's more badass than someone who can run a 5k for fun and smoke a pack a day? (Nothing, that's what.)

Here's a rundown of 12 runs coming up this summer that offer you a bit more inspiration to get moving than just running for running's sake — because let's be honest, who does that?

A few are in support of great causes, some have obstacles, others allow participants to wear costumes, and of course, there are a few that reward finishers with booze. After all, nothing says 'I just finished a 5k' like a refreshing, cold glass of alcohol and commemorative t-shirt.

Beat the Grandma, Grand Rapids
Saturday, 6/18
It is quite far away from the metro Detroit area, but we loved the concept so we're including it. It's a free country! Open to all ages, participants are encouraged to dress like grandma and race against "Real Grandmas," who get a handicapped head start. The race is limited to 300 runners and finishers are treated to Grandma's freshly baked cookies. Who's Grandma? Hard to say. The 5k starts at 9 a.m. Early registration is $15. Day of registration is $20.

The Great Beer Run, Northville Saturday, 6/25 Will run for booze. This 5k is a part of Northville's 2nd annual Great Lakes Food Fest. Starting at 5 p.m., runners are motivated to run for the sole purpose of drinking an ice cold beer one they cross the finish line. Participants will receive beer, a custom bottle opener finisher's medal, and a commemorative pint glass. Registration is $45 for early birds and $50 day-of. Proceeds will benefit Handy Hearts. 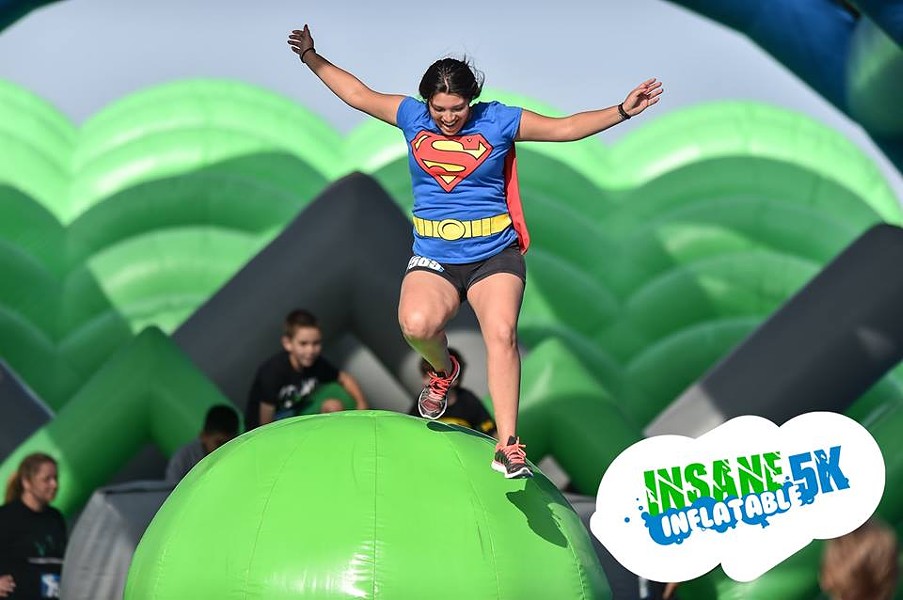 Insane Inflatable 5K, several locations
Various dates
Think 5k meets Wipeout (remember that show?). Due to the popularity of this 5k, there are multiple dates and locations. It's quite self-explanatory. The Insane Inflatable 5k involves a variety of inflatable obstacles that participants have the option of running through. The whole purpose is to have a great time with family, friends, coworkers, etc. Tickets start at $57. All Access Passes are $100 and include $20 of merchandise credit. All proceeds benefit the American Cancer Society.


Swampfoot 4 Mile, St. Clair Saturday, 7/9 Not to be confused with Swampbutt (you runners know what we're talking about), the Swampfoot 4 Mile is a competitive race that involves over 45 obstacles, real obstacles, like military-style obstacles. Swampfoot will test your endurance, guaranteeing the fact that participants will leave the run wet, cold, and probably covered in mud. So if you love misery, this one's for you! Bring a friend cuz you know what they say! Registration starts at $55. Some of the proceeds will benefit Liberty Riders Inc. and the Lone Survivor Foundation.

Hess Lake Run for A-T, Newaygo
Saturday, 7/16
The Hess Lake Run supports the A-T Children's Project. A-T, or Ataxia-Telangiectasia, is a genetic disease most commonly found in children that causes loss of muscle control as well as issues with their immune systems. The Hess Lake Run prides itself on supporting this cause, allowing runners to "run for the children who can't." In addition to the family fun 5k, there's a 10k and a half-marathon, and each route takes participants around the beautiful Hess Lake. Registration for the 5k starts at $25, the 10k starts at $45 and the half marathon starts at $70.

The Color Run, several locations Various dates Known as "The Happiest 5k on the Planet," the Color Run is the lovechild of running and paintballing. No, there aren't paintball guns involved, but colored powder is thrown at participants throughout the track. Grab your most colorful outfits or start off with a white t-shirt. Either way, you'll leave with a lot more color in your life... and on your clothes. Warning: this shit takes forever to get off of you, but you'll probably have some cool Instagram photos. Ticket packages start at $44.99.

Tri to Finish TEAM One Wine Walk/Run, Bad Axe (yes, that is an actual Michigan city)
Friday, 7/22
An event that is part of the city's Hatchet Festival, the 5k is for the wine lovers out there. A pretty relaxed run, the Wine Run is the 5k for those who want that tiny dose of exercise in their lives and get rewarded for it with a glass of wine. The run starts at 6 p.m because who doesn't want to run and drink wine on a Friday night? Registration starts at $28. Proceeds benefit the Huron County Relay for Life.

The Jingle Run, Ann Arbor
Saturday, 7/23
Celebrate Christmas in July with the original Christmas in July 5k. Created to celebrate the Christmas season without the icy winds and snow-covered streets, the Jingle Run is a family-friendly run. Every 1k will be decorated with a different Christmas theme and participants are encouraged to dress in festive outfits and sing Christmas carols while walking or running along the path. Registration is $20. Proceeds will go to the New Life Kids Ministry at New Life Church in Ann Arbor. This 5k is also dog-friendly, hurray!

The Red Dress Dash, Detroit
Wednesday, 7/27
Lady in redddd is dancing with meeee. Ladies (and gentlemen) are encouraged to wear red dresses while participating in this Belle Isle 5k. Partnering with the American Heart Association: Go Red for Women, the Michigan Fitness Foundation is hosting it's first Red Dress Dash. Raising awareness about heart disease AND getting dolled up in a sassy red dress to walk/run a few miles? It's the best of both worlds. The run starts at 7 p.m. Registration starts at $40. Proceeds will benefit the American Heart Association: Go Red for Women. 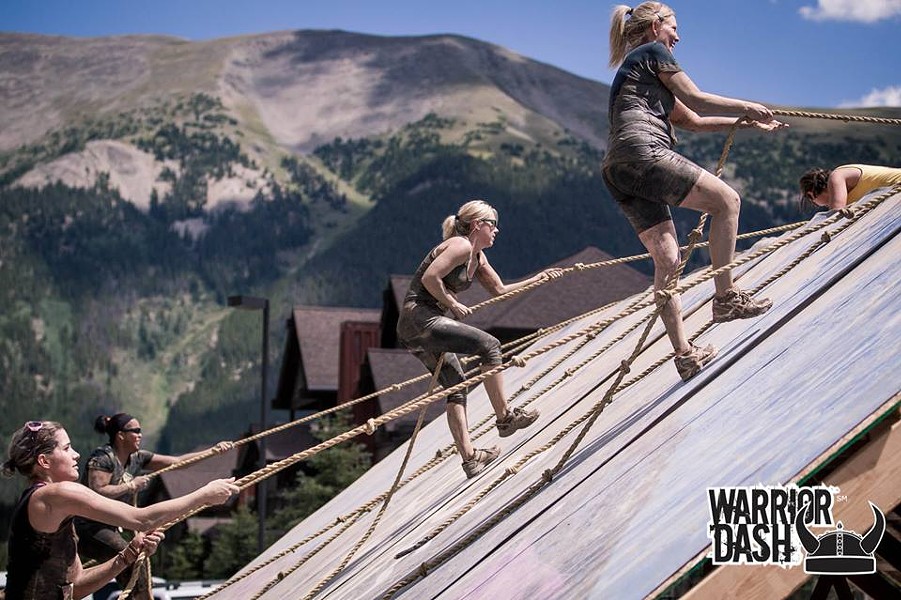 Warrior Dash, Mt. Morris Saturday, 7/30 The Warrior Dash is an alternative way to spend the weekend. Featuring 12 different obstacles, the 5k does not just involve simply walking or running your way across the finish line. Participants will run through mud, wade across a lake, and take on obstacles named Goliath and Fisherman's Catch - all for bragging rights, an epic fuzzy helmet, a bottle opener medal and an ice cold beer. Registration starts at $75. The race sponsors St. Jude Children's Research Hospital. 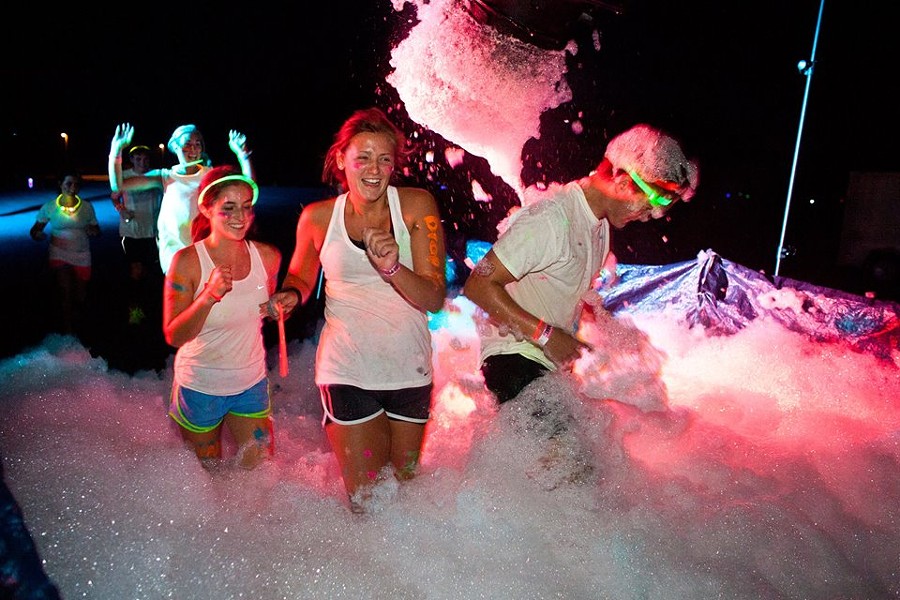 Glow in the Park 5k, Milford
Saturday, 8/20
This year, the Glow in the Park 5k has an 80's theme. Dress in your 80's best and get down with the rest. This 5k takes starts at 9 p.m., right when the sun goes down. After sunset is when the real party begins. Run the 5k, illuminating the paths with your own glow in the dark gear, and dancing along to great 80's tunes. Registration starts at $35. The 5k benefits the Community Theatre of Howell.

Hockeytown 5K, Detroit
Saturday, 9/10 Run or walk your way down Atwater Street to Joe Louis Arena representing your favorite Red Wings player. The event begins at 8 a.m. and finishes with a 5k Festival that every hockey lover will enjoy. Two registration packages available: Grind Line Package is $50 and Production Line Package is $79.