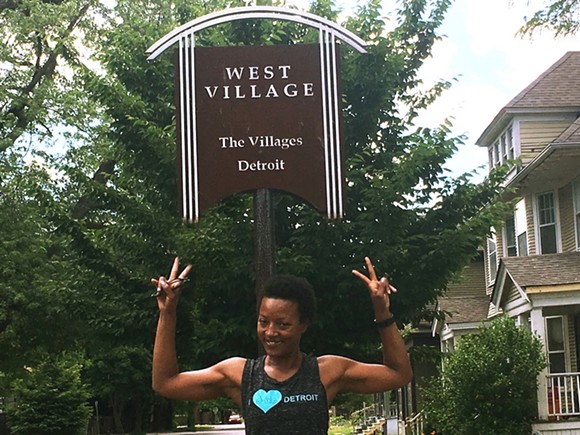 Amina Daniels was 11 when she started her first business. It was a concession stand she manned during baseball games in Roseville, and the young entrepreneur handled everything from the inventory list to the cashbox.


Now, the metro Detroit native is using her lifelong entrepreneurial spirit to bring the first contemporary indoor cycling studio to the city.

After graduating with a degree in public relations from Clark Atlanta University in 2008, Daniels took a leap of faith and moved from Atlanta to New York with no job.

A go-getter in every sense of the word, Daniels found a job after only two weeks and went on to build an impressive resume that includes big name brands like Michael Kors, Tommy Hilfiger, and Juicy Couture.

She never forgot about home though. "My parents had been telling me about Detroit, that it was changing,” Daniels says. So in August of 2013, she packed up and moved home.

Upon returning, Daniels knew she wanted to open a fitness facility, but she wasn’t sure what kind. In New York she biked for transportation and practiced Bikram throughout the week.


“I knew Detroit had a huge opportunity for expanding its fitness offering,” Daniels says.


Two months after moving back to Detroit, Daniels was working at LA Fitness and was hit by a car. One cast, two surgeries, and three bouts of physical therapy later, Daniels relied on her bike for exercise and the idea hit her: she could open a spin studio.

“I could not believe, after living in New York where SoulCycle is king, that there was no spin studio in Detroit,” she says. “It kind of blew my mind and that’s where the concept came from.”


Daniels started Live Cycle Delight in 2014 when she was in between surgeries.  “Being in physical therapy and seeing people in their 40s with mobility issues made me want to make sure that everybody has an opportunity to take fitness classes,” Daniels says.

The only thing missing was a studio.

Daniels got one step closer last year when she won the 2015 Comerica Hatch Detroit Contest. Live Cycle Delight received the $50,000 grand prize following a public vote and a live pitch to a panel of judges.


This fall, the doors to the studio's permanent space in West Village will open,
and its mission is simple: provide an opportunity for Detroiters to find delight through cycling.

"Our focus is dedicated to transforming the mind, body and spirit through cycle classes, community outreach, bike safety awareness initiatives, and social cycling events throughout Detroit,” its mission statement reads.


Before the official grand opening, Live Cycle Delight is offering outdoor rides and exercises throughout the summer. Here's Daniels giving the full rundown of what's available:

The studio will be located at 8019 Agnes St. and open from 6 a.m. to 8 p.m. everyday and feature three types of cycling classes with varying lengths and intensity levels. Cyclists can purchase single day passes or monthly memberships.

A free Bike Lounge for its riders, complete with a tire pump station, lockers, Wi-Fi, and water, and a hydrate station with cold-pressed juices and healthy snacks will also be available for purchase.

“If you exercise and eat right you will live a more delightful life,” says Daniels in a nod to the studio's name.