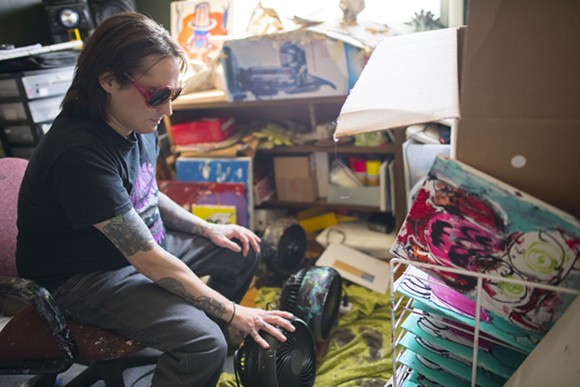 Looking at pictures of Brendan Patrick's tattooed arms, I imagine the storyboard for an unlicensed episode of The Twilight Zone. One in which Frankenstein's monster, the living dead, and those disturbing little Martians from Mars Attacks! ruin everyone's day.

"My whole right forearm is all Mars Attacks! tattoos," Brendan says. "I just have so much memorabilia. It's ridiculous at this point."

When I called Brendan, a former tattoo artist from Ferndale, he was in his studio painting a zombie squirrel. It was a request from a fan, one of many who have asked Brendan for "random, weird, wild stuff."

Brendan and his buddies take inspiration from the gross-out culture of the 1980s. The Dead Kennedys were showing everyone what hardcore punk was about. It was the age of My Pet Monster and macabre puppets that Jim Henson might have thrown together if he took speed. Adolescents traded Garbage Pail Kids to their teachers' chagrin and splatter films like Cannibal Holocaust were scandalizing audiences in cinemas around the world.

Gross-out phenomena unsettled the stomach for the same reason most 90s fashion does nowadays: colors intermingled in weird ways that the brain had trouble processing. Well, that's not scientific fact. But the evidence is in plastic, neon yellow excrement and oozing, radioactive ghouls. Gross-out was essentially pulp fiction, full of B-grade colors that accentuated the nastiest, strangest facets of the human imagination.

Judging from the work that I've seen, Brendan, 35, paints in a consistent manner. A central, often grotesque object floats in a sea of color. There are patches of negative space that balance the deep greens and honey yellows. Stylistically, he recalls someone like Jean-Michel Basquiat. But Brendan is doing something that Basquiat never did. He is painting as a blind man.

At 9 years old, Brendan was diagnosed with cystic fibrosis, an inherited disorder that causes mucus buildup in the lungs and other organs, eventually leading to respiratory failure. At 24, Brendan's lungs collapsed and he would need to receive lung transplants in order to survive. Before the operation, Brendan's vision began going awry and he could only see peripherally. When he awoke after receiving new lungs at age 26, his vision was totally gone.

For anyone, the effort to readjust would be difficult. But Brendan's case was particularly cruel and ironic. His renewed life was an emotional burden. In the absence of light, he turned to the music that had always given him joy. He grew up playing trumpet ("I'm a total band nerd") before picking up the bass at 15. Then he found the guitar.

"That was the first thing I told my mother when I was in the hospital, to go grab my acoustic guitar. I actually got super good since I lost my vision. The first couple years, I was literally practicing eight, ten, twelve hours a day because I had nothing else to do." Brendan still plays with two bands: a hardcore group called The Wretched Sights and a southern rock/metal band called Goblin Claw.

As a visual artist, he remembers the influence that Fangoria, a horror film fan magazine, had on him. Nosferatu, Creature from the Black Lagoon, and George Romero zombie flicks were the kinds of movies Brendan would watch as he painted. Now, he works with the images that were impressed on his mind so many years ago. Brendan uses puffy paint, an acrylic craft paint that expands and raises when it dries.

"It gives me some sort of element that I can actually feel," he says. "With me being able to feel the painting, to feel the canvas, it actually changes everything for me. I kind of just do an outline with this puffy paint. And all my bottles and tubes of paint, they're all brailled out. To oversimplify it, it's basically a coloring book at this point. I try to stay in the lines." Brendan laughs. "That doesn't always happen, I think."

These days, when he does live paintings at local art fairs, people will approach Brendan and fawn over the way he uses color. It's one thing for a blind artist to continue painting, but how does he know which colors go well together? The secret isn't all that romantic, really.

"I still remember my color wheel."

Brendan's humor is as clear as the jovial voice that carries it. He understands the public interest in his story, as well as its gravity, and he also knows that his humor is one reason why other members of the blind community are drawn to him. He didn't expect to be "some big, pseudo-celebrity," as his parents jokingly call him. But he is, and he uses his unique position to encourage people when he can. What stuns him even more is the fact that he and his friends have been making a documentary about his experiences.

Brendan's longtime friend Rob Cousineau is a co-owner (along with Chris Rosik) of the Get Super Rad film production company. Like Brendan,

Cousineau grew up "loving scary shit." He started watching horror films at an age that would probably leave most other children damaged. Cousineau and Rosik are at the helm of the documentary project called Can't See Sh*t, which they envision as a road trip movie.

Brendan and his friends have adopted a sort of cavalier attitude towards mortality and aren't interested in making a "sad fluff piece." They don't shy away from the fact that Brendan has lived longer than most people expected. The documentary is in its early stages, and they hope to film at gallery shows, conventions, and cool locations throughout the U.S. such as New Orleans and the Pacific Northwest. They're going to make puppets of Brandon to do reenactments.

Fitting. It's a plan that makes sense for someone like Brendan. He feels like a superhero. One of the interesting ones, though. The kind that bleeds, maybe screams about it for a bit, and then goes on kicking ass.

"My story is not about what I can't do," Brendan says. "It's about what I am doing."
Brendan will be selling his art at the Wyandotte Street Art Fair July 13-16. For more info check wyandottestreetartfair.org.