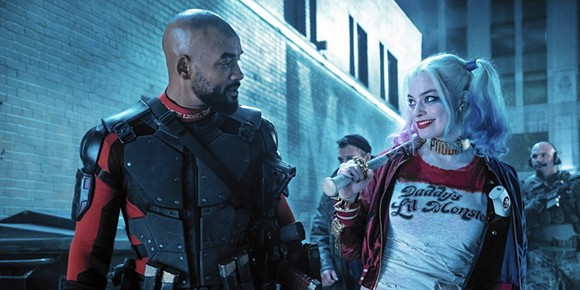 I really wanted this to be my shortest review ever and just say: Please, I beg of you, do not go see this movie.

Alas, I am glutton for punishment. I am going to tell you why you shouldn't see this god awful movie and what you should do instead.

We all know who is in Suicide Squad. They have been jumping through hoops with Jimmy Fallon for weeks now. Will Smith plays a hitman who cannot miss. Margot Robbie plays a badass co-dependent. And Jared Leto plays Heath Ledger, er, the Joker.

That should be enough to make you want to see it. And for millions of folks, it will be. But Deadshot's flawed perfection and Harley Quinn's maniacal love deserve their own stories. Maybe even on TV. Comic book movies have all been suffering from the same overcrowded, bloated scripts lately. Why did Deadpool stick out? Because it was just about one dude (one hilariously foul-mouthed dude).

Comics have the beauty of telling a story over months of issues where corrections can be made even when the ball is rolling. Films do not afford that opportunity. If you make a mistake — like putting Flag and Boomerang in the movie version — then you're stuck with it.

Word on the street is that Warner Bros. got their grubby hands on what was considered to be the final product and recut it to make it less dark because, you know, Americans hate dark superhero movies. So, you can hold out hope for a directors cut, but chances are it'll still suck.

Why? Because it was written by the guys who write the responses basketball players give at a press conference. Seriously, did the writers make a drinking game out of how many awful one-liners they could jam into the movie? It's like they opened fortune cookie after fortune cookie looking for the next cheesiest line.

There is only one cure for the affliction that we find ourselves plagued with right now — STOP! Just stop going to these movies! Please!! There were two exclamation points in that last one. That's how serious this is. The studios will never stop churning out this mindless drivel that sucks all hope out of seeing a good superhero movie again until we stop throwing our money at them.

So, instead of murdering you money at a showing of Suicide Squad, go see Ghostbusters, Star Trek, Jason Bourne, and/or Don't Think Twice. Or stay home, get out your old JVC tape recorder, look angrily just off screen and read the first hundred cliches you can find. Any of this is lightyears better than seeing the dumpster fire that is Suicide Squad.