Felicia Fullwood, chronicler of our cityscape 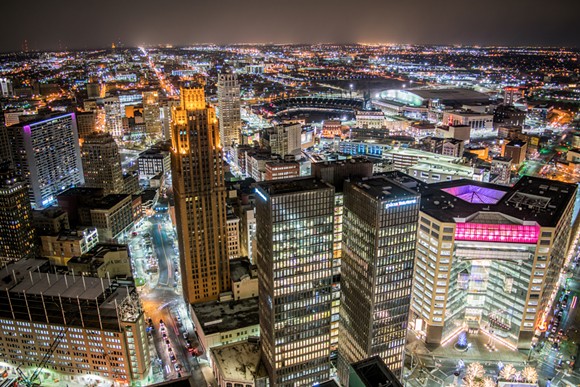 If you're lucky, you’ve caught one of Felicia Fullwood’s cityscape photographs being shared on social media. The young photographer has quickly made a name for herself by hanging out on rooftops past midnight photographing the big axel. Her photos are vivid, colorful, and taken from numerous downtown structures (The RenCen, Book Tower, Penobscot, and Park Ave hotel, to name a few). She’s been featured in Inkaddict, Zipper, and at the Detroit Historical museum.  Metro Times caught up with the Clinton Township native to find out what motivates a 20 something year old to photograph Detroit while the rest of us are sleeping.

Metro Times: What made you decide to get into photography?
Felicia Fullwood: I was shooting with my phone for a long time, and basically exploring around Detroit, going in different buildings, taking pictures and it just turned into buying a camera and it basically changed my life.

MT: Are you self-taught?  Did you have a mentor or take classes?
Fullwood: I’m self-taught; I had a lot of friends who showed me the ropes, and I used a lot of trial and error.


MT: What motivates a person to go on top of buildings during Batman hours and take photos of Detroit?
Fullwood: It’s a way to see the city that I’ve never seen it before.  It’s a different perspective of the city and it’s a therapy for me.  I go up there and nothing else matters and it’s just like I’m in my own little world.

MT: Kind of like meditation?
Fullwood: When I shoot sunrises; that’s the time that it’s most meditative like.  The whole city it sleeping and I’m on the roof photographing the sun coming up.  Just being up there watching the dark turn into light. You can’t even hear the hustle and bustle of the city, it’s like you’re above it all.

MT: What’s the longest you’ve ever shot?
Fullwood: Last summer I got off work at 4:30 and I was shooting all night until the sun came up. That was like 16 or 18 hours.

MT: Since you’re obviously not scared of heights; what is going through your mind when you’re on top of these buildings taking photos?
Fullwood: I was afraid of heights until I started doing really tall buildings. I don’t really think about it, I’m so focused on taking in the experienced that I don’t think about the negative.

MT: What is your favorite building rooftop on to shoot off of?
Fullwood: The Book Tower. It gets the entire city at an awesome angle.