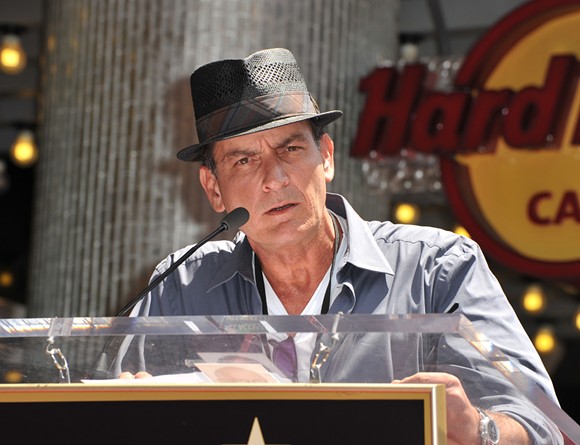 Is it too late now to say sorry, Charlie Sheen? If you're Justin Bieber, yes — but if you're Charlie Sheen, there's no time like the present to say you're sorry.

Sheen was a guest on The Drew and Mike Podcast this morning reports The News and took the opportunity to apologize to the entire city of Detroit for his "performance" that took place at the Fox Theatre. back in 2011. You know, when he was on that #winning phase of his life and said really offensive things all the time? Man, what a time to be alive back then.

In a hilarious New York Times article, the writer describes the show (metaphorically entitled "My Violent Torpedo of Truth/Defeat Is Not an Option") as "belligerent and boozy" and most of the audience had left before the show had even ended.

During the podcast, Sheen sincerely apologized for the performance saying, "I owe the entire city an apology. Seriously, man. It was a mess."

Drew and Mike asked Sheen what the fuck was wrong with him back in 2011 and Sheen gave a pretty honest answer describing, "I wasn’t on dope. I wasn’t on booze. I was doing a lot of testosterone, you know, which if you do too much, I think metabolizes as some type of a steroid, so essentially you can look at the whole thing as just a roid rage meltdown.” He even said that he "felt suffocated" and didn't have "any real creative freedom."

Well, Charlie — we accept your apology full heartedly (well, at least the Metro Times accepts his apology). You seemed to be really fucked up back then, you made us giggle with #winning (which I still use to this day), and you stuck it to the man after CBS fired your ass. Sure, you pissed a shit ton of people off, but who hasn't? We all deserve forgiveness, so this one's for you, Charlie! Cheers!