A Detroit article from 1904 rails against city's crazy street grid 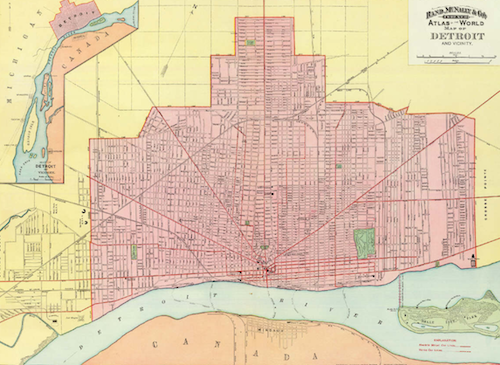 We've talked about Detroit's urban plan before. Maybe not in such great detail as blogger Paul Sewick, but enough to tell the story of how we wound up with our crazy, hopscotch street grid that can make it such a challenge to get around town.

For the most part, it's an unholy patchwork of plans based on French ribbon farms, the Woodward Plan of 1806, the layout of an off-kilter 10,000-acre tract, and finally the compass-oriented grid of the U.S. Public Land Survey. Although Judge Augustus Woodward had created an impressive system for the city, the demands of industry and growth forced the matter: Expedient politicians insisted on laying out the city using the original tracts.

What might have been! Instead of Woodward's broad avenues leading every which way, we were left without vital crosstown thoroughfares. That's thanks to the helter-skelter development of the old French ribbon farms — land holdings resembling a stack of toothpicks — which left intersections off-beam all over the city. Important avenues narrowed at the outskirts of town, and as Detroit grew, had to be enlarged and expanded at great cost in money and historic architecture. Where the old city, aligned with Woodward 30 degrees off north, met the new, there grew a welter of streets headed this way and that. The people didn't seem to mind. In fact, Detroit's citizens seemed almost hostile to planning ahead for growth, and originally resisted ringing the city with Grand Boulevard, which they described as a road "in the middle of nowhere."

Above all, Detroit was a city that grew by exigiency: Industry, developers, and railroad-builders expanded the city according to their demands, not to the dictates of any overarching plan. As a result, the symmetry of, say, a Manhattan or a Washington, D.C., was never to be.

This has been something that has rankled Detroiters of fine sensibilities for more than a century. Even in the late 1800s, residents of our fair city had begun to look somewhat more fondly on the Woodward Plan. But a 1904 remark by Mayor William C. Maybury apparently sent one Detroiter over the edge. Maybury had said: "Few Detroiters are aware of the fact that after the great fire of 1801, this city was laid out according to the original plans of Washington, D.C." 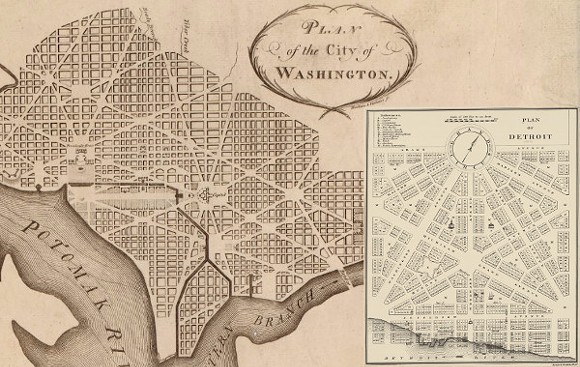 Maybury was wrong here on several counts. First of all, the Great Fire of Detroit was in 1805, not 1801. Second, the Woodward Plan was fundamentally different from Pierre Charles L'Enfant's plan for Washington, D.C. Instead of a system of diagonal avenues slicing through a waffle-grid of rectangular blocks, the Woodward Plan was largely hexagonal.

But Maybury's fundamental error is that that only a few dozen blocks, if that, were ever laid out according to Woodward's plan. It was scoffed at by residents and leaders alike until its abandonment in 1818.  So for a glad-handing, baby-kissing politician like Maybury to heap unearned praise on the city was too much for one person to bear.

The evidence? It was recorded by Clarence M. Burton in his scrapbooks, which formed the nucleus of the Burton Historical Collection that bears his name. Burton included three separate columns from the Detroit Tribune of January 1904, all of them lambasting the mayor for his remarks. The columns are lively, funny, by turns acidly ironic and extremely opinionated, accusing the city government of "criminal neglect, gross ignorance and asinine stupidity." See if you don't find something approaching the spirit of a contemporary blog in the tone.

They are presented with the kind courtesy of the Burton Historical Collection. First, the column of Jan. 11, 1904:

Next, the column of two days later:

And finally, after the storm of criticism, the denouement of Jan. 14, which ends with a parting shot at Gov. Aaron T. Bliss, a man of "limited" education.