OK, that’s a joke. It has become all too obvious over the last year that plenty of people don’t love a mass bike ride. Whether they’re enraged motorists stuck in traffic, former mass riders who feel mass rides have lost their way, or current cyclists who feel misunderstood or preyed upon, the feel-good days of the mass bike ride are clearly over.

Or are they? The Tour de Troit has been relatively free of any two-wheeled foofaraw. Maybe it’s because it only comes once a year. Maybe it’s that it raises funds for non-motorized transportation. Maybe the corporate sponsorship just helps it run a little more smoothly. But it seems safe to say this ride, which draws thousands of participants, seems relatively rancor-free. (Then again, maybe we should say that and then stand back! Who knew biking could elicit such strong opinions!)

In any event, we’re if you haven’t registered for the ride yet, this week offers your last chance. Registration is $70 right up until the ride, on Sept. 17. For registration and additional information, see tour-de-troit.org.

The ride is expected to draw 8,000 cyclists, and to add to the total funds raised of $250,000. The 30-mile ride starts at Roosevelt Park in Corktown and will pass through several city neighborhoods before concluding back at Roosevelt Park. After the ride, cyclists will be treated to food from such local restaurants as Slows to Go and Organaman, beer from New Holland Brewing, and entertainment from local bands. 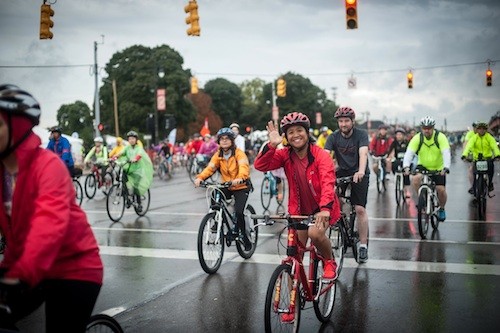