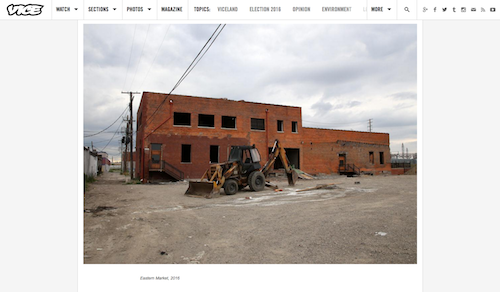 In case you missed it, there's an interesting piece on Vice about how Detroit is losing its graffiti history. It opens like this:

I was shocked when I drove through Detroit earlier this year. Throughout much of the city, the buff had advanced like an unstoppable disease. Blotchy gray, white, and brown stains of paint covered up almost every bit of graffiti in sight. Even side streets and back alleys all the way out to 8 Mile Road, the city's famed northern boundary, were covered in fresh coats of buff paint. What happened?


The article then goes on to discuss Mayor Duggan's anti-graffiti stance. Alert readers might remember how his opposition to graffiti began during his campaign, and has culminated in prosecutions that smack of politics.

The article then discusses how, in a city plagued by violent crime, Detroit was ironically a haven for writers given police with more important things to do. Writers name-checked in the piece include ORAB, TURDL, ELMER, DONT, BEGR, HAELER, GASM, DROID, and KUMA.

Have a look. It's right here.