Film review: Yusef Shakur looks at ‘Birth of a Nation’ 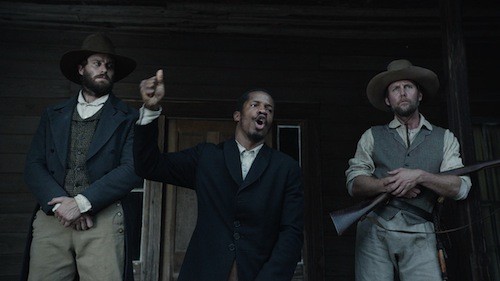 If you are going to see Birth of a Nation to measure the accuracy of history then you will surely be disappointed. Yes, the movie scores an “F” on historical accuracy, but it scores an “A” on historical relevance. As a film, Birth of a Nation achieves what most films only try to do when showing the dark history of America. Nate Parker’s film intentionally takes the audience on a methodical social journey through colonial bondage of black people fighting for their liberation. The viewer leaves awakened, spiritually uplifted and asking the question, “Why haven’t we been taught about Nat Turner until now?”

Birth of a Nation did not rely on displaying the gruesome atrocities and brutality Black people were subjugated to as a way to tell the story. (We’ve seen plenty of modern-day lynchings in the form of black men and women being shot down in the streets by white cops in 2016.) Rather, the film puts the harsh reality of these gruesome atrocities and brutalities in context as a result of the colonial bondage black people were subjected to as prisoners of war.

The central story of Birth of a Nation is how black people mustered the spirit to remain human and to ultimately resist their captors by building a space where their humanity shined bright despite their oppressive conditions. They built and created black beauty out of ugly oppression. It forged their bond where they “overstood” that their oppression and subjugation to poverty weren’t an excuse to behave poorly but every reason to love, protect, support, feed, and care for each other — and to plot for their liberation.

One example of this is when Nat and his captor, Sam, attend a prisoner of war auction, and Nat identifies a terrified black woman, Cherry, who is for sale. Her potential white buyers slobber at the mouth with lust over purchasing her. Nat springs into action, using his cunning to persuade Sam to purchase Cherry for as a gift for Sam’s sister. His ulterior motive was to rescue her from further being dehumanized, and since he couldn’t rescue her himself he had to do some quick thinking. Cherry arrives at the plantation fearing for her life, but Nat’s mother helps to relieve her fears and to fill part of a black kinship.

I must now address the controversy around Nate Parker himself. Can we separate the accusations of Nate Parker participating in a rape that he was acquitted of with the film Birth of Nation? Absolutely not: This comes with the territory of recognizing the humanity of the victim. However, his situation should not be an indictment on the movie, but an indictment on how men and patriarchy sexually abuse women and how it is swept under the rug like trash. We can’t talk about black liberation without talking about the importance of contributing to women’s liberation from patriarchy, misogyny and sexism, and there is no better lens to address women’s liberation than through the lens of black self-determination.

Social rape
When discussing the colonial bondage of black people, the tale of the brutal rape of black women is told without hesitation, and even conveyed in Birth of the Nation to remind us of the harsh and brutal reality black women were subjugated to while black men were prevented from defending their honor. But what was often forgotten in reviewing this dark history of America is the social rape that had taken place through the social degradation of black people that reduced prisoners of war to slaves.

Nate Parker is masterful and brilliant in taking an analytical approach to conveying this social rape through the eyes of Nat Turner. Birth of Nation doesn’t have an upbeat tempo to it, because if it did you would miss what you need to see through the eyes of Nat Turner: the insidiousness of white supremacy in scenes like when he witnesses a little white girl playing with a little black girl and the white girl has a rope around the black girl’s neck pulling her like she is her dog.

At the heart of the social rape of stripping black people of their humanity is the vicious culture of white supremacy. For white supremacy to operate at its best, black inferiority has to be operating at its worst. The free labor slavery extracted from black folks helped maintain black inferiority because it gave birth to black poverty while nurturing white wealth, strengthening capitalism as a way of life for white America at the expense of black people.

Transformation and revolutionary prophet
As with all revolutionaries, their resolve grows out of the oppression of those they have been selected to serve and liberate. What Nat Turner observes through this social rape feeds his transformation and prepares him to step into being a revolutionary prophet, his calling since birth. As he improves his knowledge of Biblical scripture, he is used as a tool to keep his black fellow prisoners of war docile against their white oppressors. But as he continues to read from the Bible, he receives the ultimate revelation: “Ye shall know the truth and the truth shall set you free!” He ultimately transforms how he uses the Bible: instead of a tool to keep his people docile, he uses it as means to fuel their liberation.

The day Nat embarks on the task of bringing Biblical scripture to life (“The first shall be last and the last shall be first”), he receives the blessings from his wife (“I knew this day was coming!”). This is a transformational moment for Nat, who had been observing and taking in the oppression of his people for years but only now makes the conscious decision to take action — to lead his people out of bondage. If you are open to experiencing how spiritual power works and how subhuman conditions shape and transform people and inspire them to fight against incredible odds for their God-given rights to self-determination (led by a black man who values putting his people first) then this movie is for you.

If Nat Turner were white, he would be considered an American hero. He would have a national holiday and statues built in his honor. In American history, as a result of white supremacy, since he is not white he has been depicted as a black demon. He is a black revolutionary prophet, and his legacy is that of fighting for the liberation of a captive black nation. As the film illustrates, the idea of black liberation didn’t die with him but is born in every black person, and is ultimately cultivated through our oppression to transform us into being black revolutionaries like Nat Turner.