We all know that What Pipeline is not only one of the best galleries in the region, but the country. (We all do know that, right?)

Still on view at the space for the next several weeks are riveting, large-scale street views of Detroit from the mid to late 1980s by the lesser-known Cass Corridor painter Mary Ann Aitken. Gallery co-founder Daniel Sperry spoke to us about this extraordinary show.

What Pipeline is located at 3525 W. Vernor Highway, and open Saturdays from 2-7 p.m., and by appointment at other times. NOTE: Today, Saturday, Oct. 15, the gallery closes early, at 6 p.m.

Metro Times: How did you all come to show Aitken’s work in the first place, three years ago — what was the process like?
Daniel Sperry: I first saw Mary Ann’s work around 2009 when it was acquired by the Wayne State University art collection, where I work. Five gorgeous paintings of potted plants on newspaper and an oil on canvas of a figure centrally floating on a red ground, with a surface textured from layers and layers of paint. The works were given to the collection by Aitken, who at the time was fighting breast cancer. Over the next few years, I continued to revisit these works, and still view them as stand-outs in a collection known for having powerful, aesthetically raw works from the Cass Corridor legacy. 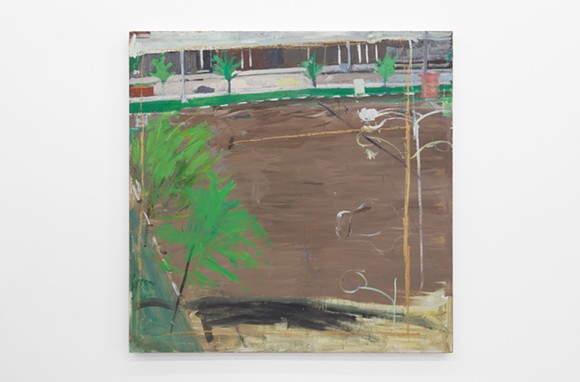 In late 2012, as Alivia [Zivich] and I were preparing to open What Pipeline, we learned that Aitken had not survived cancer, and that Ed Fraga (a Detroit-based artist and her longtime friend) was looking for a gallery in Detroit to fulfill Mary Ann’s wishes — to have a solo exhibition of her life’s work and to bring thirty years of her daily art making to light. We didn’t hesitate to offer our newly forming space and efforts.

MT: “My sister lived her life with a wondrous intensity, as if always staring into the sun.” — Maureen Aitken on her sister Mary Ann — anything at all you want to say about this quote from online materials for the show, or what it’s like working with Aitken’s family?
Sperry: We never had a chance to meet Mary Ann so we only really know her through Ed Fraga, a Detroit-based artist we know and her friend since the early 1980s when they both had studios in the Cary Building (Downtown at Gratiot and Broadway). Ed is our main liaison with the Aitkens and takes care of Mary Ann’s archive of work, and he’s recalled for us visiting her in Brooklyn, going to see all the current art exhibits and discussing them extensively with her. While she did not seek very often to exhibit her work during this time she was constantly engaged with contemporary art, and we have been lucky to have Ed’s memories to give us a picture of who Mary Ann was. 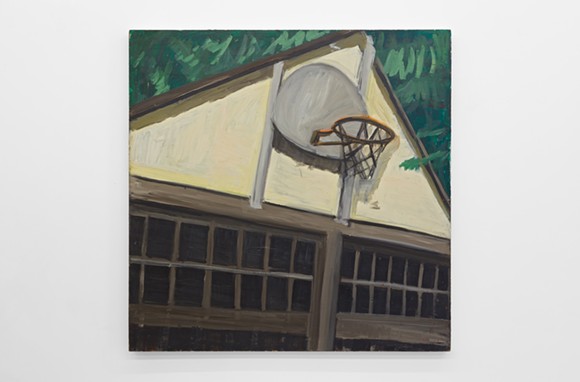 We’ve also been lucky to have her sister Maureen, an accomplished writer and teacher at University of Minnesota, write this piece for us that really added details to our mental image of Mary Ann, how she worked and her vigor towards pursuing life, and experiences. Maureen is very incisive about her words, and wants to make sure they’re coming across as she intends before she puts them out into the world. Working with Maureen has provided a lot of insight about a critical eye that might have been part Mary Ann’s character, too. Their family was and remains close knit, and I think that stability allowed Mary Ann to take on nurturing roles in her life, especially challenging roles like working at Woodhull [hospital in Bushwick, Brooklyn]. She seemed like a very giving person whose generosity was rooted in knowledge of herself, her strengths and capabilities. And she knew, and utilized, the healing power of art as well.

MT: What’s special about this show — that these are larger works? How did this particular show come together?
Sperry: The works in this show are mostly 48 x 48 inches and yes, they are her largest works that we’re aware of, and clearly created in series around the same time period. We were aware of two similar works when we did our initial solo showing of her work (2013’s “Black Abstract: Mary Ann Aitken 1983-2011," a broad retrospective of her work shown in tandem with Trinosophes). After that exhibit we visited her parents house with Ed and found these paintings stored in the basement there, along with many other works. Viewing them together created such a cohesive moment, we knew right then we’d show them as a group. Square cropping has become such a contemporary device through Instagram and it’s interesting to view these decisive crops through that filter. The repetitive nature of the identical size across evenly distributed throughout the gallery also brings to mind windows, which is a wonderful allusion to Mary Ann looking out of her Cary Building studio windows and painting the daily view. 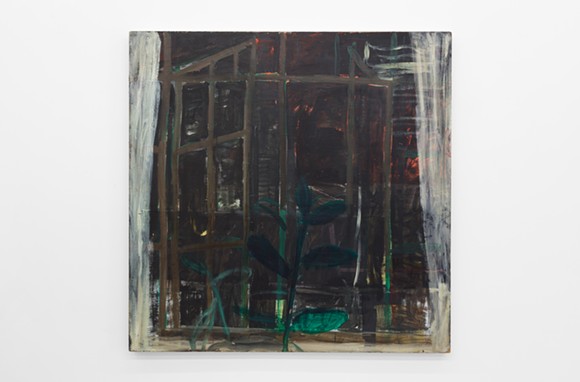 MT: You guys sell most of the work you sell outside of Detroit at art fairs, and such - - correct? Is that how you have managed to sell Aitken’s works? If this question is too boring, then just skip it.
Sperry: Aitken’s work has really great local support and we owe that in part to Ed Fraga. He is a very talented artist who also has decades of experience and he has been so active in getting the word out to local collectors about our endeavors to show Mary Ann’s paintings. Fairs are very important to what we do, though. After we did our first fair we realized we had met more people in two days than we would have in two years in Detroit. People around the world are eager to talk about Detroit and we’re happy to represent part of what the city has to offer, and dispel weird “blank slate” myths. 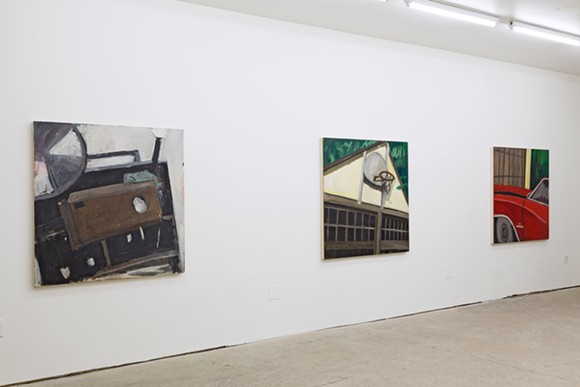 And art fairs are where we meet the collectors willing to take risks on emerging artists that have brightly promising futures, such as Puppies Puppies, Dylan Spaysky, and Bailey Scieszka. It would be great to have just a local collector base that supported us enough to get by, but those days are seemingly over for most galleries. Art fairs are a reality and can be useful, they’re no different than say World of Concrete in Las Vegas or similar networking conventions. When we do them, we try to make them as fun as possible for ourselves, our artists, and the viewers.

MT: We all know that some artists’ work only really makes sense at a later date; would you place Aitken in that category?
Sperry: Aitken’s work, which in retrospect can be divided into eras, could easily have been exhibited during her lifetime. But she had a stable income and some artists decide not to pursue the social aspect of the “job” that is totally necessary to becoming a gallery-exhibiting artist. In some ways that is the beginning of selling artwork: artists often must sell themselves to get the kind of attention needed to begin an exhibiting career. Adrian Piper has written “The best means to art-historical significance is financial independence” and “The best means to financial independence is a day job in a different field”.

MT: How do you personally conceive of her work in the context of Detroit’s history of art? And then in the larger context?
Sperry: Aitken's work, with its untidy physicality and use of materials at hand (substrates for oil paintings include: canvas, wood, masonite, newspaper, linoleum tile), undoubtedly was influenced by her predecessors of the Cass Corridor — artists like Gordon Newton, Nancy Mitchnick and Cay Bahnmiller. She grew up down the street from Robert Wilbert and was a student of his at WSU. But she was also, always, looking at artists throughout history, and contemporaries (Guston, Diebenkorn, Mitchell). What holds her life's work together so powerfully is her steadfast voice or vision within painting, a confounding compositional sensibility, and the autobiographical nature of her chosen subjects.