24 Halloween parties that you won't want to miss

Grab your shoulder-padded dresses, brick phones, and satin shirts! It’s time for the Mega 80’s Halloween Spooktacular, which is easily the best ’80s party around. The Mega 80’s will be playing crowd favorites, with scenes from classic teen horror films playing on the screens. It’s going to be totally rad.

Bram Stoker’s classic Dracula is getting the stage treatment at Wayne State’s Hilberry Theatre. A staple in Halloween lore, Dracula is a story that remains enigmatic a century later. In this production directed by playwright Charles Morley, the tale of the Transylvanian Count and his spine-tingling hunt of Jonathan Harker, his fiancé, and his friends comes to life.
Tickets range from $25-$30, and are $10 with a student ID.

Nothing says Halloween quite like Halloween. Seriously though, Jamie Lee Curtis’ pre-Activia career has been studded with many gems, but this classic, John Carpenter horror flick will always stand the test of time. It’s showing for two days at Main Art Theatre, so don’t miss your chance to see it on the silver screen.

To create hype for his latest film Zombies, independent filmmaker Hamid Torabpour is attempting to organize the largest Zombie Nerf Attack and make it into the Guinness Book of World Records. It’s a two-hour game, where players rotate as the living and the undead every 20 minutes, so that everyone gets the chance to do both. You’ll have to purchase a weapon there so that they know you’re not sporting some super tricked out Nerf gun. Those 16 and older can participate as long as they’re accompanied by an adult.
Registration is $100. The game begins at 6 p.m.

With headliners Ray Volpe, London Nebel, and Nasty Nasty, Dub Down’s Halloween Bash is going to be quite the extravaganza. In addition to the headliners, the event will feature 13 local acts.
Tickets are $10 in advance and $20 at the door.

Fowling, which combines bowling, horseshoes, and football, is what Hamtramck’s firefighters invite guests to do in celebration of Halloween. If the game sounds daunting, don’t worry. There will be plenty of people there to help. In addition to fowling, there will also be a costume contest and plenty of raffle prizes.

Makeup artists will compete for $4,000 in cash prizes in a runway-style contest decided by judges from the film industry, along with an amateur costume contest, food, drinks (tickets include two), and silent auctions.

Proceeds from “Beautiful Nightmares” will benefit Sanctum House — a safe house for survivors of sex trafficking — and the Northwest Oakland Abolitionist Hub, a nonprofit that works to end human trafficking.

It sounds like a classy party for a good cause to us.

Maybe partying isn’t quite your thing, or you want some more options. For the week leading up to Halloween, Wheelhouse Detroit will feature their Haunted Detroit bike tour, which shows off some of the city’s spookiest landmarks. The tour costs $30, and you’re going to want to bring/rent a hybrid or road bike.

The Piquette Plant, better known as the birthplace of the Model T, has a pretty unique way of bringing history to life. Or rather back from the dead, for that matter. For the Ghosts of Piquette Tour, the plant will be filled with “ghosts” that will tell visitors about the early days of the factory, and will let them go into the plant’s dark, creaky spaces. Tickets are $18.

Damned: An Exhibition of Enlightened Darkness

As always, the three days of Damned are going to be a party. More than a typical Halloween party, this art exhibit will satisfy those looking for fancy food, a masquerade ball, and an overall high-brow experience. Plus, the event’s raffle proceeds will go to Burners Without Borders, a charity that helps the homeless by giving out survival backpacks. 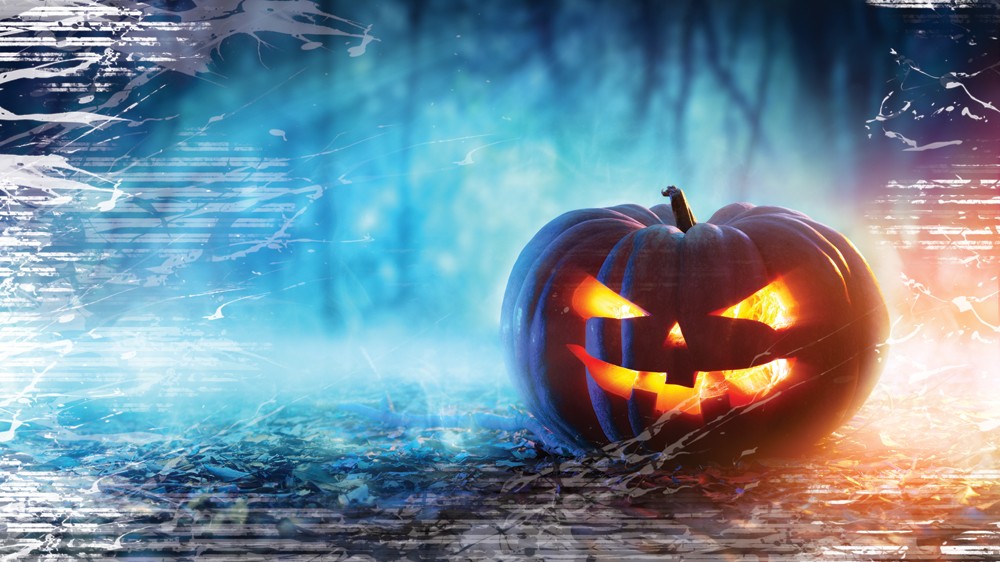 Stay and Play Social Club’s annual Boo Bash is going to be a good time. There are individual and group costume contests, and the prizes are a $400 league voucher for groups, and a $100 voucher for individuals. Tickets are $32, but that price includes cover, entertainment, and three alcoholic beverages. It’s a steal.

What’s this? What’s this? The HopCat will host an entire party devoted to Nightmare Before Christmas! Guests are encouraged to dress up as Jack, Sally, or whoever their favorite character from the cult phenomenon is. Tim Burton fanatics, rejoice. If your costume is good enough, you could be one of the lucky top three who receive a gift card. The event starts at 6 p.m., but the screening won’t start until 8 p.m. It’s only $4 to get in, so don’t skip it.

Covenfest is back again this year with Rob Zombie vs. Marilyn Manson, Nique Love Rhodes and the NLR Experience (as Missy Elliott), the Scrappers (as the Flying Burrito Brothers), Queens of Noise (Joan Jett/Runaways tribute), and School of Rock (as the Ramones). Covenfest is going to be a great time this year, and as you can see by that lineup, there’s something for everyone. The suggested donation to get in is $10, and all proceeds are going to Turning Point, a shelter for survivors of domestic violence.

It’s creepy, and it’s cheap. There will be free candy, a candy-eating contest, a costume contest, and a killer lineup. Performances include Ironsnake (as Judas Priest), Courtney and the Hurleys (as Dolly Parton), Shapes and Colors (as My Chemical Romance), Stikyfut (as Radiohead), and many more. If that isn’t your thing, there will also be all-night dancing on the patio (Erno the Inferno and Ryan Spencer as DJs), as well as vintage tiki lounge music in the cafe from Sister John Misty.

The Whitney’s annual Halloween Celebration may already be sold out, but their Haunted High Tea is not. This is a treat that you can bring the kiddos along for (adult tickets are $50, and children 10 and under are $30). The Whitney’s special guest, Dracula, will be in attendance, and guests will receive a special “spooky gift.”

Monster’s Ball is back at the Fillmore once more with stilt-walkers, illusionists, acrobats, and more. Local DJs like Al Neon and Tommy Holiday keep the party going with sick tunes until 2 a.m. Also, if you’re a student at Wayne State, bring your student idea and you can take a free shuttle from the Dunkin Donuts on campus.

In the words of Destiny’s Child, “The club is jumpin’ jumpin’.” This is exactly why you need to be at Bleu on Oct. 29. In addition to the many DJs who will be spinning until 4 a.m., there will be live performances by LuveLovesYou and the Native. To add to the fun, there will be a costume contest. Don’t forget Bleu’s dress code, though — you’ve got to look your best to get in. General admission is $10.

Blood on the Mitten Book Tour

@ The Next Chapter Bookstore & Bistro

Author of Blood on the Mitten: Infamous Michigan Murders 1700-Present, Tom Carr, will be in Northville to promote it. The book focuses on more than 50 murders ranging from crimes of passion to calculated horrors. Carr, an award-winning journalist, not only takes readers right into the heart of these chilling tales, but also lets readers in on what happened to the community after. At the Next Chapter Bookstore & Bistro, readers will have the chance to hear Carr speak about the book and get some more insight.

The Haunted Kingdom is trying again to break the Guinness World Record for largest Halloween gathering, and it definitely is bringing its A-game this year. The event, which describes its attendees as “Detroit’s sexiest ghouls and goblins,” will certainly be something to see. Also, there will be a slew of performers and shows, as well as costume contests to participate in. Tickets are currently $20.

Unfazed by the creepy clown epidemic that’s sweeping the nation? Really wishing you could see something sorta like ICP? Twiztid’s Frightfest Devil’s Night Edition is the answer for you. Yeah, you’ll definitely get to see Twiztid, but you’ll also get to see Mac Lethal, Zodiac Mprint, and Lex the Hex Master. You need to get your ticket if you haven’t yet.

So, this looks a little bit crazy, but also like a total blast. There will be three DJ’s on the main stage, as well as another three lined up for the patio. In addition to the general raving that you’d expect at Elektricity, there’s going to be “250 gallons of green slime vs. foam.” With that said, it seems like it’s going to be a raging good time. Tickets are $12.50.

Detroiters may love Devil’s Night and Halloween, but what we love more than anything is good food. Rock City Eatery’s Halloween Harvest Dinner is going to be a bounty of fine cuisine. The meal will cost you $100, but it’s six courses of autumnal delights including Squash Bisque and Pumpkin Chocolate Pie. Yum.

Adventures in Babysitting, The Lost Boys

Oh boy. Say hello to the night. So, The State Theater is starting off the evening with Adventures in Babysitting, which, if you haven’t seen it, is kind of like Ferris Bueller’s Day Off, but with Vincent D’onofrio as a mechanic who truly resembles Thor (it’ll make sense once you see it), and Bradley Whitford (Joshua Lyman from The West Wing) playing a douche-y college kid who’s clearly too old to be in college. It is fitting that they would choose what is arguably the worst/best Halloween movie that exists to end the night. The Lost Boys is a movie that everyone needs to see. It has Corey Haim and Corey Feldman in it, there are very campy vampires, including Bill from Bill and Ted’s Excellent Adventure, who plays an extra, there’s a crappy cover of “People Are Strange,” at one point Corey Haim is wearing a “Born to Shop” T-shirt, and his bedroom features a shirtless Rob Lowe poster. That’s all you need to know. Tickets are $10.