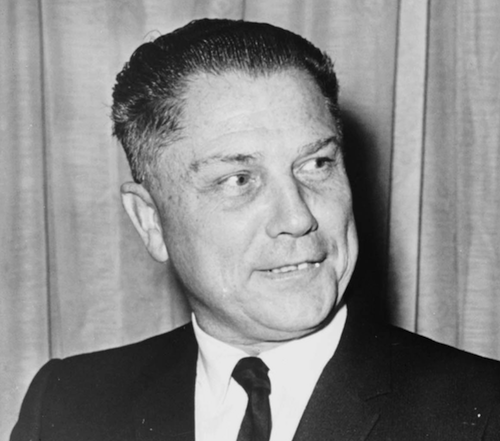 We got a nice call from Matt Buskard, the general manager and majority owner over at Bobcat Bonnie’s. We’d called him yesterday to find out what was behind the decision to rename Casey’s Bar, which Buskard was turning into a taco dive bar, 'Hoffa’s Hideout: A place to disappear.'

Sure, we kidded about it yesterday. And Deadline Detroit said the name choice pushed at the boundaries of good taste. “Tacky,” another person called it. And the reaction has pushed the good-natured Buskard to tears of laughter and despair.

Describing the setbacks he’s had re-inventing Casey’s, Buskard tells us, “I’m just at a point where I’m like, OK, listen: I’m trying to do right by keeping it a divey Detroit union bar, and then I’m an idiot for doing tacos. And then I try to come up with a cute kind of name, because when you think of Hoffa, you think blue-collar, and then I’m an idiot for doing that.“

“We just want to keep it a cool, old Detroit bar, to be honest with you. And some people liked the new name and some people frickin’ hated it. And then everything with Bobcat Bonnie’s was awful, and I’m awful, and …” bursting into laughter, he cries, “I’m like, ‘Oh my god. I can’t win!’”

After talking with Buskard, who originally hails from Grand Rapids, we can understand a bit more clearly how surreal this must all seem so the warm and chatty 31-year-old. He really seems to genuinely care what goes on, and is unused to the barrage of criticism. He says that disrespect or controversy are “the last things I frickin’ want.”

He says he doesn’t have an edgy or snarky bone in his body. “I’ll be honest with you: If you ever met me, you’d be like, ‘You’re the lamest person ever.’” he says with a chuckle. “That’s why some of my friends are laughing that this is such a thing.”

As for “A place to disappear,” he agrees in retrospect. “I could see where the tagline is kind of … shitty.“

Buskard says he’ll be changing the name of the bar to something else, a decision he says, in the end, came down to a mild objection from the Hoffa family.

Buskard says that as soon as he considered naming the joint after Hoffa, he reached out to James Phillip Hoffa, the 75-year-old president of the International Brotherhood of Teamsters. Of course, right now Hoffa is busy campaigning for another five-year term as president, as well as stumping for Hillary Clinton, and so Buskard had been mostly in touch with Hoffa’s spokesperson.

But a recent word from Hoffa’s son is what gave Buskard cause to reconsider the Hideout moniker.

As Buskard learned, “Hoffa thought about it and was like, ‘My dad didn’t drink. I don’t think it would be a good idea to have his name outside of a bar.’ He said, ‘I get your concept, I get your target, I get that when you took over Casey’s you still want to keep it blue-collar, union, firefighters and all that.’” The idea of a bar named for a teetotaler just struck Hoffa Junior as out-of-bounds.

“We’re respectful people,” Buskard says. “Hey, if the family says no, we are 100 percent A-OK with that.”

Any suggestions on the new name? Post them below if you like. Buskard says he and his crew have come up with one they feel will fare better, but they’re still open to good ideas. In the meanwhile, Buskard and company seem glad to be able to put this “tempest in in a taco shell” and get back to the business of pleasing customers.