18 events happening this week that you need to know about 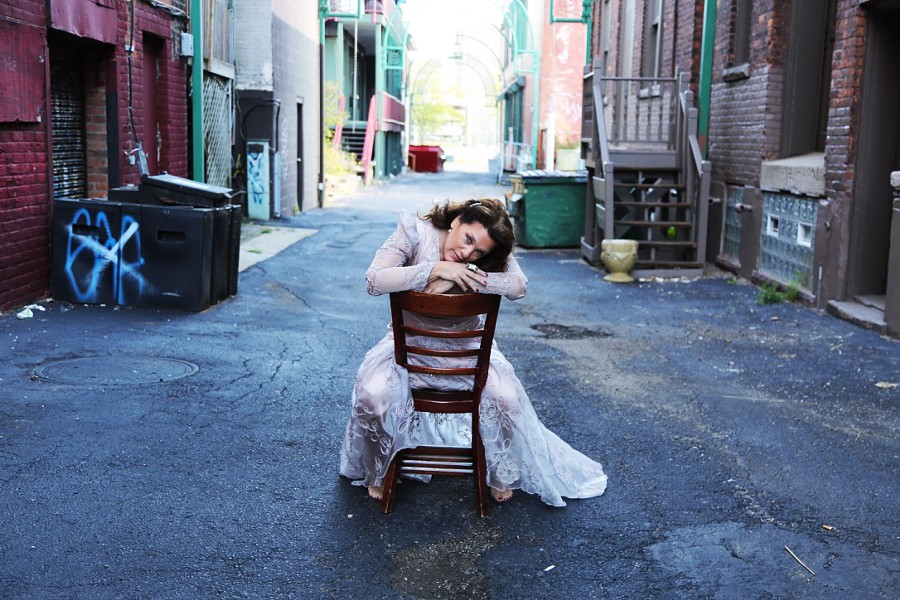 Wednesday, 11/9
Majid Jordan
@ Saint Andrew’s Hall
Canada’s favorite R&B duo, Majid Jordan, has made a huge impact on the scene since their conception in 2011. They’ve worked with Beyoncé, Drake, and DJ Khaled, and earlier this year they released their first album, Majid Jordan. The duo is comprised of Toronto native Jordan Ullman, and Bahrain native Majid Al Maskati. The two met at the University of Toronto, and soon they put out their first self-produced EP, Afterhours, under the name of “Good People.” Right now, they’re up-and-comers, but they’re headed for big things.
Doors open at 7:30 p.m.; 431 E. Congress St., Detroit; saintandrewsdetroit.com; Tickets are $28.25.

Thursday, 11/10
Jill Jack and the American Songbook Band
@Local Kitchen & Bar
Detroit talent Jill Jack and her band are putting out their first jazz album, Pure Imagination, and it is certainly a highly anticipated release. Starting out as an idea half a decade ago between Jill and her drummer, Ron Pangborn, it is now a fully fleshed out, artfully picked collection of classic jazz standards. Performing jazz seems only fitting for Jack, as she started her foray into music with her parents taking her to local piano bars, like Little Henry’s. It was there where she first encountered Ernie Swan, who took her under his wing and taught her to test her vocal limits and learn different vocal styles, like that of Billie Holliday. Her love of jazz was furthered by her grandfather, who would sing such classics as “Alfie” and “Moon River,” which are both featured on the album. For jazz fans, this album is sure to provide a unique touch to these beloved standards. Fans are cordially invited to attend the release party for Pure Imagination.
The party begins at 7 p.m.; 344 West Nine Mile Rd., Ferndale; jilljack.com; Tickets are $20 - $50.

Thursday, 11/10
Dining in the Dark Detroit
@ K.O. Kitchen
Messy eaters, put away your white shirts if you’re going to attend this sight-deprived four-course meal prepared by chef Jeremy Kalmus (Rock ‘n Roll Caviar). Basically, how this works is you and your buddies go to K.O. Kitchen, where they’ll give you guys blindfolds to put on. Then, you have to eat your whole meal relying on smell, taste, touch, and sound to enjoy an autumn harvest-themed feast. This will be a one-night only event.
The check-in starts at 6:30 p.m.; 2995 Yemans St., Hamtramck; diningdarkdetroit.com; tickets are $55.

Friday, 11/11
His Name Is Alive
@ El Club
The El Club is hosting a release party for a record called Calling All Believers. This is music that is as indebted to the dense rock action of a Thin Lizzy and the delicate vocal complexity of the Free Design as it is stuff like the spirit of Detroit’s free jazz scene in the 1970s (really). This is music that has a lot of parts to it, but it never sounds forced or pretentious. So the show is one you can bring your weird older prog stoner friends to, as well as your younger and musically savvier friends. It is a music that will bring us all together, and the theme of the new album is science, as it was commissioned by some particle physics geniuses in Switzerland at the CERN (where they throw very small particles together in an effort to destroy the world, or understand everything better). Seriously, that is how this record came together, based on an invitation to go out and perform for atom-smashers. Of course, Defever and crew have been known to tell a tall tale or two. But we’re pretty sure this one is legit. Whatever it is, this is His Name Is Alive’s best record, ever. Paint Thinner opens.
Starts at 9 p.m.; 4114 W. Vernor Hwy., Detroit; elcubdetroit.com; $8.

Friday, 11/11
Fake Limbs
@UFO Factory
Frequently compared to legends like the Jesus Lizard and Stnnng, Fake Limbs are paving their way through success and coining their own brand of awesomely loud post-hardcore. They’ve described themselves as “social justice street rock,” which is refreshing at a time when musicians, and everyone else, happen to be pretty fed up with the world. Attacking oppressive ideas and the straight-up craziness of conservatives, Fake Limbs’ latest album, Matronly, is sure to stick it to the man.
The show starts at 9 p.m.; 2110 Trumbull Ave., Detroit; ufofactory.com; Tickets are $7.

Friday, 11/11
Transgender Day of Remembrance 2016 Detroit
@ Central United Methodist Church
In conjunction with Gender-Identity Network Alliance, Central United Methodist Church will host an event to honor International Transgender Day of Remembrance. This day is designed to spread awareness and love for the transgender community as well as to pay respects to all of the transgender people who have been murdered for being themselves. Twenty-three transgender people were murdered in 2016 alone.
The event will begin at 7 p.m.; 23 E. Adams Ave., Detroit; transgendermichigan.org.

Friday, 11/11
Arkells
@ The Magic Bag
Arkells is Canada’s supreme alternative rock band, and their latest album, High Noon, reached No. 1 on Canadian iTunes charts and debuted at No. 3 on the Canadian Nielsen Soundscan. From their live shows to their blend of modern and classic recording techniques, and savvy songwriting capabilities, it is no wonder that Arkells is seeping into the ears of international music lovers. Their tour is a must see for any fan of alt-rock.
The show starts at 8 p.m.; 22920 Woodward Ave., Ferndale; themagicbag.com; Tickets are $16.

Saturday, 11/12
Art and the Immigrant Experience: Culture Lab Detroit Panel Discussion
@ Gary Simmons Installation
In honor of Culture Lab Detroit’s 2016 program, “Walls,” a group of people will be at the Gary Simmons Installation’s unveiling to discuss how art brings people together, and what role it plays for immigrants. Speakers include Migguel Anggelo, Kia Arriaga, Chido Johnson, Rola Nashef, and Gracie Xavier. All artists and immigrants, they are definitely the experts that you want to hear from about this stuff. If you go, you’re sure to hear about hot-button issues like the refugee crisis and the end of the election. You’ll also hear about the important role that immigrants have played in creating America’s cultural identity.
The panel begins at 1 p.m.; 1301 Broadway St., Detroit; The event is free and open to the public. 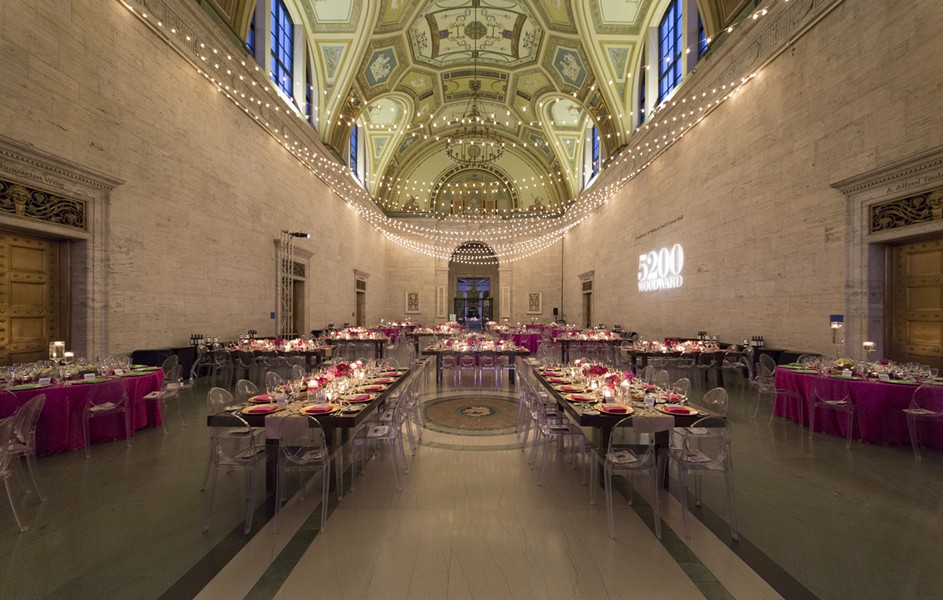 Gala Grandiosa
@ Detroit Institute of Arts
In honor of Salvador Salort-Pons’ first year as director, the Detroit Institute of Art’s annual gala will feature an extravagant Spanish theme for guests to enjoy. The late night “La Hora Loca” party will go until midnight, prior to which guests can enjoy a seated meal catered by Forte Belanger and a VIP cocktail reception. “I am deeply honored that this gala celebrates both my first year as the director of this extraordinary museum and salutes the historic festivals of my native land,” Salort-Pons says. “This evening is about more than festivals, food, and fashion. It is about connecting to each other, to our community and the world around us through the power of art.”
The event begins at 6 p.m.; 5200 Woodward Ave., Detroit; dia.org; 313-833-7967; tickets for the “La Hora Loca” are $100.

Saturday, 11/12
Detroit Brawl Boxing
@ The Masonic Temple
Another year, Another Detroit Brawl. The Masonic’s Jack White Theater will host the tournament this year, which will feature Salita boxing. This year’s boxers will include Ed Williams, James Gordon Smith, Alexey Zubov, Serdar Hudayberdiyev, Jarico O’Quinn, Giorgi Gelashvili, Zach Shamoun, James Lester Jr., and more. These bouts are sure to be great to watch, and it’s going to get everyone’s adrenaline pumping.
The event begins at 5 p.m.; 500 Temple St., Detroit; themasonic.com; Tickets start at $28.

Saturday, 11/12
Turtle Island
@ PuppetART
PuppetART brings to life the classic parable that is Turtle Island. The show tells the tale of two brothers’ journey to find understanding and connection with nature and each other. The story will be told using a variety of different types of puppets, light effects, masks, and live actors. The show will definitely instill appreciation of Native American folklore in kids young and old.
The show starts at 2 p.m.; 25 E. Grand River Ave., Detroit; puppetart.org; tickets are $5 for children and $10 for adults.

Saturday, 11/12
A One Night Stand with Bill Kenny and Maximono
@ The Grasshopper Underground
Two European techno stars, Bill Kenny and Maximono will bring their rule-breaking beats to Detroit. Kenny, a native of Leeds and resident of Germany, co-owns the quickly successful label, This Ain’t Bristol, which Maximono has worked with. Maximono, a duo of former producers of Drum&Bass, push the limits of the house genre to create an untamed sound.
The show starts at 9 p.m.; 22757 Woodward Ave., Ferndale; facebook.com/thegrasshopperunderground; Tickets are $10.

Sunday, 11/13
Uniform
@El Club
Uniform is a New York City duo comprised of Ben Greenberg (formerly of the exceptional band the Men) together with Michael Berdan who’s the producer/engineer responsible for most of your favorite records from the superlative Sacred Bones label. The act’s sound has evolved recently, beyond their initial drum-machine-and-bass-synth setup, to encompass all manner of crazy sound effects and exploding sounds. This really is one leftfield show you should make space for in your life. It’s the soundtrack to the total war we all are engaged in, whether we acknowledge that or not.
Doors at 8 p.m.; 4114 W.Vernonr Hwy., Detroit; elcubdetroit.com; $10.

Sunday, 11/13
WALK Fashion Show
@ Eastern Market
WALK Fashion Show has brought the fashion industry to Detroit and visa versa since 2009. Get ready to see a variety of fashion-forward looks from up-and-coming independent designers and models. A bunch of industry officials will be there to see if Detroit can work it.
The show starts at 3 p.m.; 2934 Russell St., Detroit; walkfashionshow.com; Tickets are $50.

Sunday, 11/13
The Zagreb Folk Ensemble
@The Breen Center
Since 1945, the Zagreb Folk Ensemble has brought to life the rich, colorful culture of the Slavic people of Croatia. Their show harmoniously brings together historically correct costumes, instruments, vocal styles, and dance to create a completely immersive, highly entertaining show. Each suite of the show represents a specific Croatian village, which is an extraordinary feat to correctly achieve. Never before has a folk ensemble so accurately depicted a culture. For fine arts lovers, this is an experience to travel to.
The show starts at 3 p.m.; 2008 W. 30th St., Cleveland; ignatius.edu/breencenter; Tickets are $20.