Now, as a means to get a better peek into America's collective psyche, Estately has gathered data on each state's googling habits and created a smart little infographic. 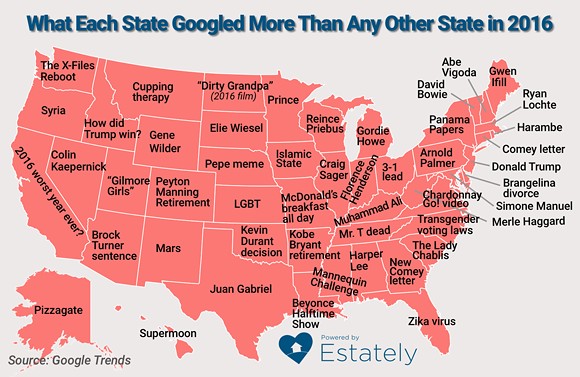 For Michigan, that was Gordie Howe. The hockey legend died in June.

For California, that was "2016 worst year ever?" which is a legitimate inquiry given the state of things.

Alaska was more concerned about Pizzagate than the rest of us and Florida was, quite rightfully, had bigger concerns about Zika than any other state.

Frankly, we really like where Missouri's head's at. Despite the impending apocalypse, their little fingers were busy searching for information about McDonald's all day breakfast. Because if we're all going to die, we might as well have a McGriddle in our belly.

The Scene gordie howe pizzagate 2016 can suck it mcgriddle