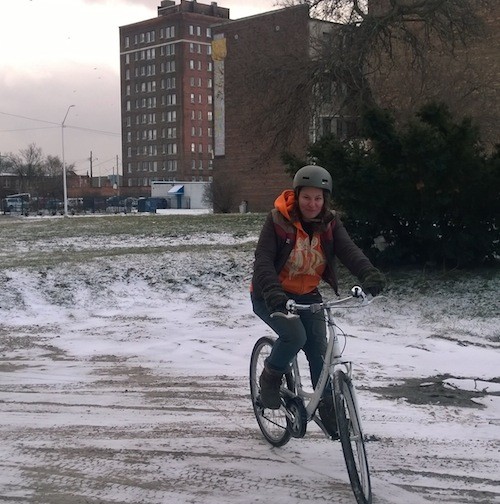 There’s a reason the League of American Bicyclists holds its annual “Bike to Work Day” on May 19. With April’s showers over and those chilly May mornings warming up, it’s the perfect time to try to get people into the routine of biking to work — a routine that organizers hope will last at least as long as good weather holds.

So it came as something of a surprise to us that Detroit’s Back Alley Bikes is hosting a bicycle-riding fundraiser in mid-January called Bike the Blizzard. It’s a 24-hour event during which volunteers try to log as many miles as possible. Believe it or not, last year’s fundraiser drew dozens of riders logging more than 3,000 miles. One cyclist pedaled more than 300 miles during the event.

In fact, after talking with Back Alley Bikes’ Zach Wahid for a half-hour, it all starts to make sense. Wahid, 24, may be a somewhat unlikely advocate for year-round biking: He actually owns a car, and he hails from car-centric Troy (“The City of Tomorrow, Today!”). But he’s perfectly happy to commute on two wheels from the Boston Edison-Virginia Park area down to Cass and Selden each day.

“If it’s something you’ve never tried, I would say that it’s a lot less difficult than you think,” Wahid says. “I imagine that people in their cars see a cyclist in the snow and say, ‘Oh, wow, that looks hard. That looks uncomfortable. That person is probably freezing.’ But every time I think that I sort of laugh to myself, because they have no idea how much fun I’m having. It’s not like walking outside on a really freezing night. It’s warmer than you might imagine it to be.”

Wahid isn’t alone, either. Several of his friends ride year-round. “I’ve really been out in pretty much all types of weather. Even blizzard conditions, I’ve gone out riding, snow a foot or more deep, it’s never really stopped me. As long as you really have the right gear and are using a bike that you feel comfortable with, the weather doesn’t really pose too much of a barrier.”

Different cyclists use different tactics to deal with the snow. Some use fatter tires, or special treads. Some use “junk bikes” with heavy steel frames since winter corrosion can be significant. But Wahid points out that last year’s 300-mile rider used nothing special: a track bike with a very light frame, very narrow tires.

Coming up with the right mix of clothing is a bit more exacting, Wahid says. He dresses differently depending on whether it’s above freezing, just below freezing, or way below freezing. Obviously, gloves are important for grabbing cold handlebars in all cold weather. Below freezing, Wahid will usually just tuck his hoodie under his helmet. But when it’s really cold, he’ll break out thick wool socks, long underwear, and a facemask, which he finds more convenient than a scarf. For the upper body, layers of T-shirt, hoodie, and a “shell jacket” over it all that can still breathe. Wahid has a PVC top but doesn’t wear it in the winter because it doesn’t breathe.

“I definitely prefer really cold to rainy,” Wahid says. “Like, people are always surprised by how dressed down I am, but it’s actually really easy to overdress and overheat if you have too many layers. Normally when I ride, the amount of clothing I wear isn’t really enough to keep me warm if I were just walking around —but it’s just the right amount for when I’m riding. Plus, when it’s really cold out, it’s pretty dry. So as long as you’re warm, it’s better — than being out during a monsoon.”

“I would say the worst conditions are probably when the snow is a little bit mushier, and there kind of after people have driving on the roads for maybe a full day. And the lanes are really narrow because there’s only been one lane that people have been driving on, so even though the amount of cars on the road might be lower, you’re riding on streets where the sheer volume of snow along the edges of the road can make is difficult. I usually try to avoid roads like that or just suck it up and ride through the muck for a while cars and buses pass. If I’m only going a short distance on that road, I’ll just take the lane and force people to wait a little bit.”

Remarkably, Wahid says he’s never gotten a flat while riding over snow. “Part of that is because I’ve ridden long enough that I pretty much know which roads tend to have more debris and where that debris tends to lie. I’d say more of an issue for me is when the snow covers the cracks in the pavement — because sometime the cracks are big enough that they can snag your tire and bring you down.”

But even when things go wrong in bad weather, Wahid says he’d rather be on his bike, which is easier to fix, and easier to schlep to the shop, with no half-hour wait for a wrecker to show.

But we still found it hard to believe. Nothing stops Wahid from biking? Not even a hurricane or tornado coming through town?

“I’ve never really been out when there’s been a tornado warning,” he says with a laugh. “If it’s really stormy and there’s lightning out, then I’ll probably try to take shelter until that stops. But the really snowiest days are when it’s, for me, the most fun. … I would say my ride my daily ride is a lot of days it’s one of the highlights of my day. I see neighbors and friends and I can stop or pull off the road and say hello. And I love not having to park a car.

“Basically, I really love being outside as much as possible. When the weather’s not great it really helps my mental and emotional state to get time outside, and not be stuck sitting down in a car or in the office, all day. I just love breathing the air and feeling the wind and just the sensation of it all. It’s can be a rush at times.”

Back Alley Bikes will host its Fifth Annual Bike the Blizzard charity bike-a-thon on Sunday, Jan. 15, 2017, from midnight to midnight, at Back Alley Bikes, 3611 Cass Ave., Detroit; 313-879-5630. Riders must raise a minimum of $50 to participate. For more information, or to register for the ride click here, or contact meg@thehubofdetroit.org.

The Scene cycling in the city Detroit bicycle culture