Japanese Girl's Day celebrations to take over the DIA this Sunday 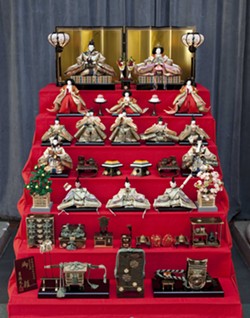 Come November 2017, the Detroit Institute of Arts plans to open a Japan Gallery and in order to create some hype around that stupendous news they're celebrating the traditional Japanese holiday of Hinamatsuri this Sunday.

Hinamatsuri — AKA Girl's Day, AKA Doll's Day — is historically celebrated by displaying ornamental dolls that represent the emperor and empress of the Heian period along with their attendants and musicians. The dolls are exhibited on a tiered, red cloth-covered stand often flanked by a gold veil.

Traditionally, people would set up these displays in their home in advance (much like Christians set up their Christmas trees) and take them down shortly after the day of Hinamatsuri. During the day's celebrations straw dolls are set aloft down a river and it's believed that they take with them bad spirits and troubles.

In Japan, Hinamatsuri takes place on March 3, but the DIA will celebrate the traditional holiday on Sunday, March 5. Their display will be located in the Great Hall along with a traditional kimono.

During the celebration the Japan Business Society of Detroit will run an Origami workshop. There will also be a tea ceremony, a demonstration of Ikebana (flower arranging) by Lauren Paul and other members of the Detroit chapter of Ikebana International, plus a calligraphy demonstration by Kyoka Fujii of Kyoka Japanese Calligraphy Design and a kimono sash-tying demonstration.

Performances will include a dance by the Japanese Society of Detroit Women’s Club, and a koto (a traditional six-foot-long Japanese zither with silk strings) performance by Yuki Asano of the Miyabi Ensemble.

The whole thing goes on from 1 to 4 p.m. and it's free as long as you're a resident of Wayne, Oakland, or Macomb County.

For more info, you can go here.