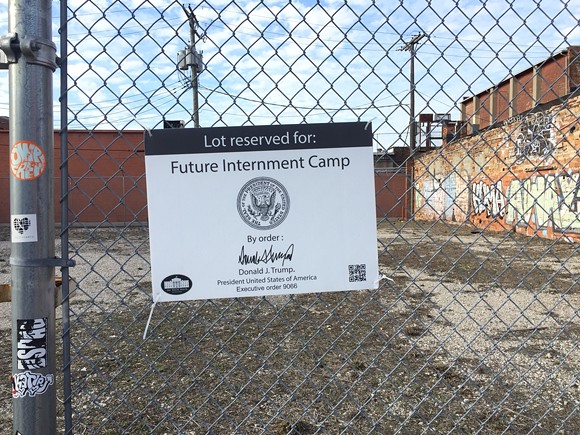 A sign bearing a presidential seal has been posted on a fenced-off plot in Eastern Market designating the area the site of a “Future Internment Camp.” Printed in dull government hues and scrawled with President Donald Trump's signature, the sign citing "Executive order 9066" almost appears real.

Fortunately, it’s not. But the street artist behind the message says the notion that Trump will someday put people in detention centers for their ethnicity is not farfetched.

The sign on Winder Street near Orleans was created by Plastic Jesus, a Los Angeles-based artist known best for public works of social commentary. A resident on the block says the message appeared Friday.

At least one other such sign has been posted elsewhere in the country. Plastic Jesus tweeted an image of it Saturday along with the caption, "Coming to a city near you." A total of ten signs are expected to go up around the U.S., according to a source who spoke with those who hung the one in Detroit.

Shortly after he was elected, Trump cited Japanese-American internment camps as “precedent” for his proposal to create an immigration registry. The internment camps are widely viewed as a stain on the country’s history.

Though Trump has never suggested bringing back such detention centers, Plastic Jesus argues on his website that it is within the realm of possibility.

The QR code on the sign takes you to Plastic Jesus’ website, where the artist elaborates on the project. “A few (months) ago the idea that people would be prevented from traveling to the USA whilst holding the correct credentials would have sounded crazy,” the artist writes. “Or that people having traveled here legitimately would be detailed for no reason and without legal representation. Or that immigration snatch squads would wait outside schools or public meetings to apprehend people even though their immigration status is currently being processed by the USA governments... Not so far fetched now?”

Trump has so far signed more than two dozen executive orders and memos during his less than two months in office. They've included the authorization of a U.S.-Mexico border wall, the stripping of federal grant money to sanctuary cities, a temporary halt on refugees entering the U.S. and a temporary ban on travel from seven Muslim-majority countries.

Trump signed a revamped version of that travel ban on March 6. The new ban is designed to address the concerns of the judges who blocked it, and includes six countries versus the original seven. The administration has said it believes the revised ban will be implemented more smoothly than its predecessor, which sparked protests and widespread confusion when it was rolled out early last month.