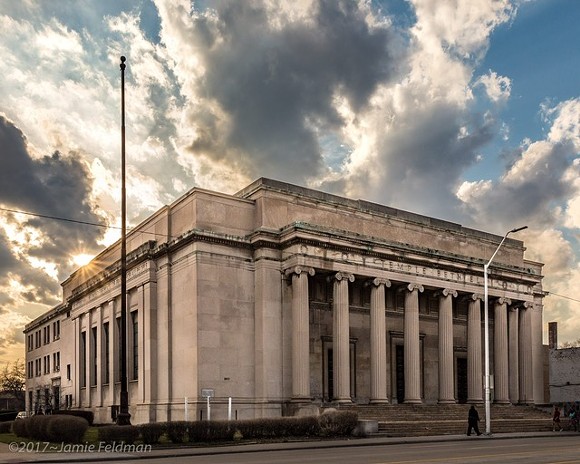 Originally constructed as a home for the Temple Beth El's congregation, the limestone monolith located at 8801 Woodward Avenue in Detroit has seen better days.

It's currently inhabited by a non-denominational Christian church called the Breakers Covenant Church International (BCCI), but the building needs a new roof, new bathrooms, and other updates that would modernize the nearly 100 year old structure.

BCCI pastor Aramis Hinds says his congregation purchased the building about two and a half years ago, and he's been working to not only make improvements to the structure of neoclassical, Albert Kahn-designed edifice, but also develop the space as a community center that would celebrate the neighborhood as well as the building's heritage.

"I was proactive in finding ways to work with the Jewish community," Hinds says.

Now, Hinds and his congregation have formed a relationship with the Isaac Agree Downtown Synagogue and Rabbi Ariana Silverman as part of a concerted effort to create a sacred space that's inclusive and welcoming to all.

That effort would see both Christian and Jewish holidays celebrated in the building as well as joined efforts to welcome the community with opportunities for learning, performing arts, entrepreneurial incubation, and lectures series.

But first, they need some money. So, they're crowdfunding, hoping to raise $100,000 in the next month. And that's a modest sum for the amount of work Hinds would like to see done to the building, which includes basic repairs to the roof and building, converting bathrooms, and renovating the gymnasium, among other projects.

The initial sum would repair the roof as well as secure the retainer of an architect who specializes in historic buildings.

So far, a Kickstarter campaign has raised nearly $5,000 and still has 28 days left. The campaign reads in part, "The Bethel Community Transformation Center (BCTC) is a coalition of local clergy, community leaders, visionaries and builders joining forces to weave together the past and the future at BETHEL: a modern performing arts center, worship space, and community center all under one (big) roof."