Phobiac: NØMADS' Nathan Lithgow on fear of the dark, and show at Third Man next week 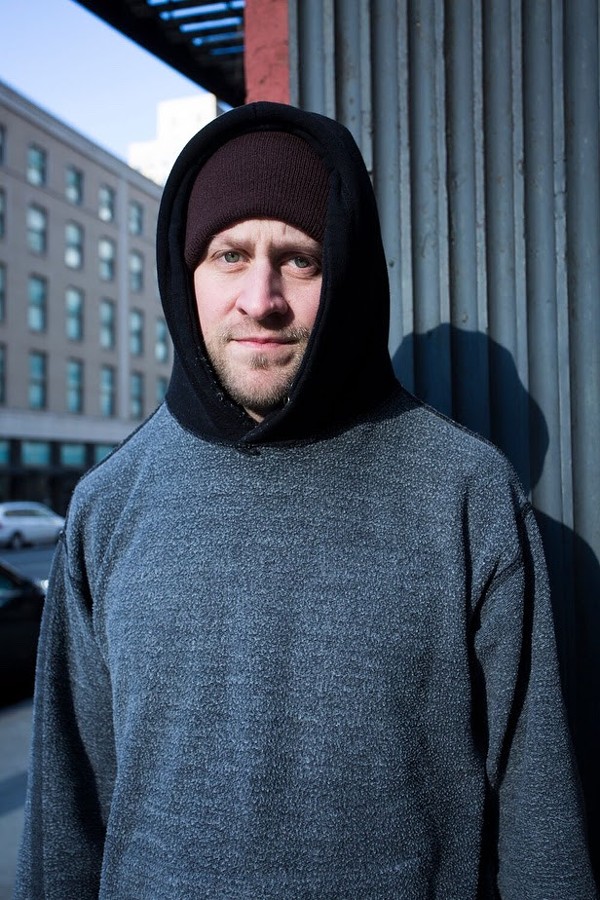 Following the release of 2014's full-length debut Free My Animal, New York City-based post-punk duo NØMADS are finally ready to release its follow-up, . Hold your horses though, as this thing is set to trickle out at a rate of one song per month between now and February of 2018.

Metro Times spoke with the band in advance of their show at Third Man Cass Corridor on , April 27. We had a chance to speak with bassist and vocalist, Nathan Lithgow, who has also played in Detroit's own My Brightest Diamond, and we talked about , his inspiration, and his return to Detroit.

"This guy put together this amazing list of clinical phobias that have been diagnosed throughout the history of psychology, and as I was searching through for Achluophobia, which is the fear of darkness." tweet this

Metro Times: NØMADS just came back from a hiatus, so how does it feel to be playing music again?

It feels great. I’ve definitely been in an introspective writing phase with getting the material together. It feels great to just lose myself it, and not have too many expectations for shows. It’s still a bit of a balancing act between my real life work in restaurants and my creative output. But it definitely feels good to be active again.

MT: Can you describe what inspired you for ?

Lithgow: I started working on this set of material about three years ago. I was actually on tour with My Brightest Diamond and it was right around the Missouri protest with that wave of upheaval happening. And Shara asked this question of "Why does dark always mean bad?" because it was such a clear black and white issue as far as race in Missouri. It just kind of got me thinking how as a kid I used to be afraid of the dark. Like I couldn’t have the door closed and be in a dark room. And I looked up fear of darkness online and it brought me to this very old generation one internet website called The Phobia List. You can still look it up; it's like a 1995 AOL website.

This guy put together this amazing list of clinical phobias that have been diagnosed throughout the history of psychology, and as I was searching through for "achluophobia," which is the fear of darkness. It just kind of became very compelling to me to look at all these strange, rare, and esoteric phobias, and I kind of started to develop a process of not necessarily intellectualizing those, but using that as a jumping off point because it just goes to show you how many strange fears we have. That’s kind of the micro-focus of it and the macro focus of the project is to examine the function of fear in our daily lives.


MT: Can you take me through the process of writing and releasing a song a month until 2018?

Lithgow: A lot of these I've been kind of working on for two years off and on and I just wanted to set deadlines for myself to really commit to just putting them out and not making it necessarily about commerce, instead just making it about getting this music out. It’s a time right now that I feel like the fear process is so prevalent in our society that for me it’s important to just put the music out and start asking those questions. It’s not really a political statement because I started writing these three years ago, but I think this year there are so many general circumstances that surround the conversations of fear that it was as good of a time as any to commit to putting these out as soon as possible.


MT: What excites you about the tour and being able to play at Third Man Cass Corridor?

Lithgow: I love playing outside of NYC. There’s something really liberating about being a stranger in town. It makes it a little bit easier to really get outside yourself when you’re performing.


Third Man is definitely on my list as far as best possible venues to play because I’m very vinyl-forward with what we have released. Vinyl feels like the right way to be putting out music right now. To me, Man is doing something really special as far as getting back to that kind of essential connection of the live music experience.


When I heard they were doing live shows cut directly to vinyl that’s kind of one day a dream of mine because that’s really the beginning of primordial elements of creating music; getting it right in one take. Man being one of the first places in the country to buy new vinyl equipment in the past 20-30 years, that was just something really inspiring to me. I’m happy to be a part of their vision and to just come back to Detroit.


MT: Do you have any prominent memories of Detroit?

Lithgow: I mean it’s more of a feeling that I get in Detroit. I’m very appreciative of my involvement with Shara, not only just as a fellow musician, but definitely introducing me to Detroit, because I think it’s a really special place to go especially from New York or LA. There’s just a different feeling to the city that you don’t get in most metropolitan centers. It’s an art scene that is very inclusive and it feels like people both want to be making art and absorbing art in the right way.