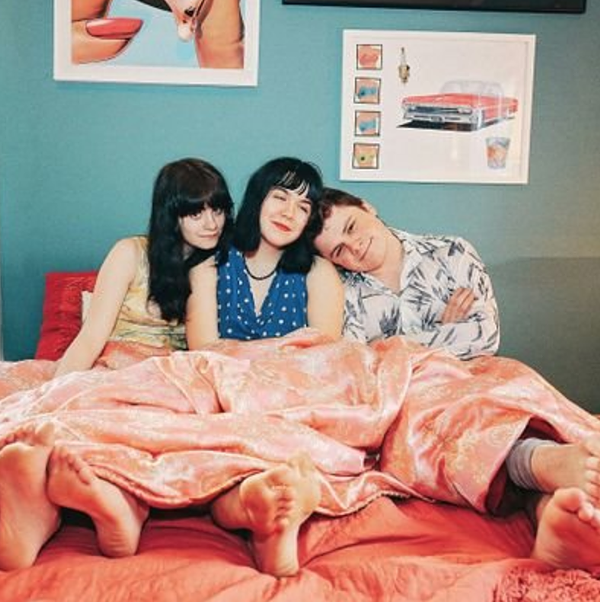 Since starting after a jam session at a Halloween party at the ages of 9 and 14, stepsisters Kelli Mayo and Peyton Bighorse have released three albums as Oklahoma City-based Skating Polly. They releasing their EP New Tricks on April 28. To celebrate the new jams, they'll be touring with a stop in Detroit at the Magic Stick on Sunday, May 14.

Metro Times had a chance to speak with the duo about their upcoming tour, inspiration, and their newest addition to the band: their brother Kurtis.

Peyton Bighorse: There were multiple things, we had instruments around the house so that was always there and we were always encouraged to be creative and explore that. Also just the music we listened to in our family. I was just thinking the other day about how I never really thought it was possible to actually be in a band until I started listening to punk music, which is what really proved to me that I could. That was like an inspiration for me.


Kelli Mayo: It was weird because when our parents first started dating, you wouldn’t expect a 9-year-old and a 14-year-old to be best friends, and we definitely weren’t, like I was pestering Peyton all of the time and she was just trying to be a cool teenager. But, then when she started shifting from the Top 40, the My Chemical Romance, to X-Ray Spex and Sleater-Kinney, that’s when mine and Peyton’s bond really kicked in. We shared love of a lot of loud girl music and a lot of loud punk music in general.


MT: Now that you have a third person what’s the creative energy like?

Bighorse: It’s great, we added our brother Kurtis and it just brings a whole other level to songwriting. There are so many ideas going around, there were always ideas going around, but it’s like so many new ideas coming from Kurtis that me and Kellie might have not thought of.


Mayo: It adds steps to the formula, so it definitely changes the process, but so far only in good ways. It’s pretty cool because Kurtis is playing mostly drums, but we can pretty much play all of each other’s instruments at the same level, so you know I can ask Kurtis for advice on my part and I can give Kurtis advice. Also as far as live goes, it’s great having him because it’s made the shows louder and cleaner in a lot of ways, more poppy.


MT: What kind of feeling does playing shows give you?

Bighorse: It’s hard to describe because obviously one of the coolest feelings, getting to play a show for someone. It’s one of the only times I don’t feel super incredibly self-conscious about everything that I’m doing I’m able to let go and being with Kurtis and Kelli it’s just so much better, they’re some of the coolest people to play music with. I mean I never played with anyone else and I wouldn’t want to. So, I don’t know playing with them and playing in general, makes me feel uninhibited I guess, not as self-conscious


MT: What’s one of your favorite songs to play?

Mayo: I really like playing "Ugly" with Kurtis and Peyton. We wrote this guitar part to go over it and it’s just really beefing. It makes it thick and just loud. It just gets pretty thrashing. I also really like playing the new EP, New Tricks it’s really fun. I have to heighten my voice and all of this stuff to be able to do it because I'm singing harmonies that Nina and Louise are singing on the record, so I definitely had to become a better musician.

Bighorse: My favorite song to play right now is "Louder than Outer Space" from the new EP. I’m heightening it up, but it always just has so much energy to it.


MT: What are your favorite albums that are out right now?

Mayo: I fucking love the Orwells' Terrible Human Beings. They are so so cool. What I specifically love about that record is that they are able to make these really heavy-move-your-body around kind of songs without having to scream that much actually. He has almost like anthemic poppy choruses.

Bighorse: The Car Seat Headrest record that came out maybe last year, maybe the year before, Teens of Denial. I love that record. I had that on repeat for like months.


MT: What should fans be looking out for?

Mayo: We are writing loads of songs. There are so many right now; so many starts, and we have a lot of finished songs too. Like, we’ve even recorded a couple of times and stuff, and we re-record. The thing is we kind of want to work on the songs and craft them a little bit more, add some more tweaks. We do this with every album, like "OK, it has to be better than the last thing we did," and we try to make every part of it better and apart from that we try to make every song sound different. So, it’s cool and I’m sure we’ll be recording that. I don’t know when, but I’m sure we are going to start demoing for it really soon.