Here's a nifty way to try out today's modern 'board games'

Mention "board games" to most people these days, and most of them will say, "Oh, like, Monopoly? Clue?"

It the kind of thing that drives Kyle Sweeney nuts.

See, Kyle Sweeney and his business partner Madison Reitzel are trying to introduce people to the joys of today's "tabletop games" — and they've come a long way since the days Col. Mustard prowled the conservatory with a candlestick.

Sweeney's business is called "The Loaded Die," and it takes over select barrooms for one day a week to try to show people just how cool some of today's games are.

According to Sweeney, changes in board games started in the mid-1990s, with the introduction of the insanely popular Catan games, created by German game designer Klaus Teuber. It set sort of a new standard for games, with its changeable board, its emphasis on strategy, and the fact that the game could be played and finished in about an hour. (Ever have that last part happen with Monopoly? We didn't think so.)

Today's board games are less likely to be found in the games section of the department store and more likely to be found at a comics specialty store like Vault of Midnight. They're designed to appeal to everybody from adults on down to children, with instructions that even youngsters can understand, and ideas that even get older players exercising their imagination. Some, such as Castle Panic, aren't competitive, but ask the players to unite against the game. This whole new generation of games has inspired the web series TableTop, hosted by Will Wheaton, who guides players through a new game in each episode. 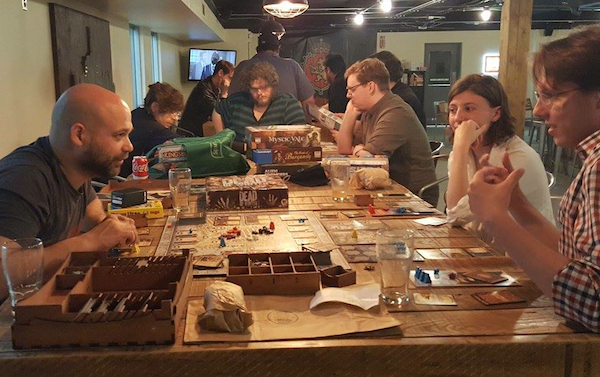 So much for explaining everything that has changed. What Loaded Die does is it maintains a cache of dozens of new tabletop games at several area taverns. One night a week, they host events where teachers guide players through a new game. Then, the rest of the week, players are welcome to come in, request a game, and play on their own.

It's a neat way to help people become acquainted with all the new stuff that's being published these days, which can be literally hundreds of games per year.

What's more, Sweeney says the direct interaction that board games demand are great for breaking away from smartphones and improving the social experience. No doubt a bit of alcohol helps loosen people up as well.

“People are looking for a reason to put down their phones” says Reitzel says. “They want to establish more meaningful connections with the people in their lives. Not just their friends and family, but even people that they’re meeting for the first time.”

And if it helps Sweeney and Reitzel avoid hearing people reference Monopoly or Clue in the future? Well, so much the better.

The Loaded Die's largest event is runs 5-11 p.m. Mondays at Rust Belt Market in Ferndale. It can attract as many as 100 gamers. They take over bars from 5-10 p.m. on Tuesday (Brew Detroit and Canton Brew Works), Wednesdays (B. Nektar Meadery's Tasting Room and Exferimentation Brewing Co.), and Thursdays (Dragonmead). See theloadeddie.com for more details.