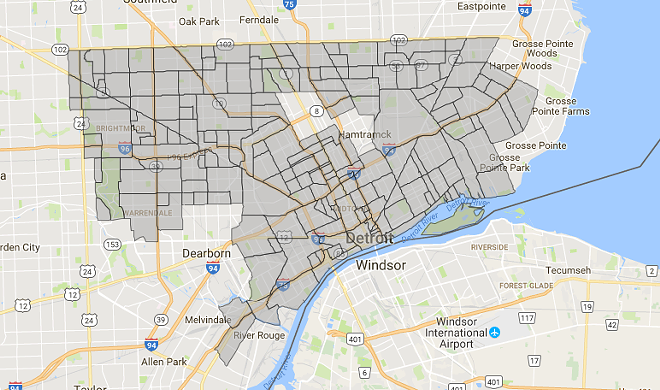 In urban areas, there’s a popular wisdom to the process of acquiring a neighborhood name. As cities grow, neighborhood identity comes from a kind of natural fermentation. Well-to-do people create fortresses of wealth, bristling with pretentious homes, often with their own municipal boundaries too. Working-class ethnics collect in enclaves where their attempts to re-create their homelands imbues a name with a definite flavor. Between them, neighborhoods are carved out.

But Detroit is different, right? Well, not always.

Some neighborhoods, such as Brush Park, were established at a time when the city was less in flux, and even their battered remains retain hints of the identity that prevailed at one time. Indeed, the precincts of the wealthy are often the best-defined, and the well-to-do left several very nice neighborhoods in their wake as they leapfrogged north and west — Virginia Park, Boston Edison, Arden Park, and Palmer Park — and finally out of the city altogether.

But so much of Detroit was essentially built in 15 short years: From the announcement of the “Five-Dollar Day” by Henry Ford in 1914 until the onset of the Great Depression in 1929. Also, during this period, with the widening use of the private automobile, people could live anywhere, and vast, undeveloped gaps between the streetcars began to fill in with neighborhoods as quickly as property could be sold and buildings put up.

Which means that a lot of neighborhoods in Detroit didn’t grew in that sort of “organic” way most people think of when they consider the development of neighborhoods. Instead, a “neighborhood” might be ill-defined, and may be more likely to take its name from a major high school or a busy intersection. Sometimes it’s chosen by a group of residents who have formed a community group. Sometimes, that can confuse matters, especially when community groups open and close like flowers in the springtime. (One friend of mine laments that her neighborhood has “has had 10 in the last decade, whatever quasi governmental unit is sucking money and vanishing.”)

If I go into it in such detail, it’s partly because defining Detroit neighborhoods has always been something of an inexact art. When I started out on the copy desk at Metro Times, we referred to a map that I believe was in use at one of the daily papers. Even then it seemed to be a bit out of date, or sporting neighborhood names of questionable currency.

Another factor complicating neighborhood names is the involvement of real estate interests in determining the identity of a neighborhood. As soon as a neighborhood’s cachet starts to shine, surrounding neighborhoods are apt to become “brand extensions” (looking your way, “North Corktown”) in a way that may rankle local residents, but is sure to prime the pump for real estate operators. Perhaps that’s what drove some local wags to come up with preemptive names of their own, such as “Corktown Shores.” (Remember, folks, always lay your satire on three coats thick or it will just become tomorrow’s reality.)

About five years ago, the complexities of naming a neighborhood were addressed in an intelligent article from the Atlantic’s City Lab site. More recently, Lee DeVito tracked the issue in a wide-ranging MT cover story called “Welcome to ‘Springwells Village’ — a Southwest Detroit neighborhood most of its own residents have never heard of.”

That kind of controversy goes a long way toward explaining why news media would do well to rely on more established maps rooted in tradition when it comes to tracing the contours of city neighborhoods. Of course, reporting will always supplement that with what some people call a place, or are calling a place right now. To use literary metaphor, cities are always works in progress, but some things deserve to be written in ink, and others in pencil.

What sparks all this discussion? It’s the Detroit map from the Department of Neighborhoods. I mostly like it. It brought a smile to my face to see all those unsexy neighborhood names, without an iota of marketing “oomph” — names like Berg-Lahser, Evergreen-Outer Drive, Cadillac Community, Fiskorn, Airport Sub, and Midwest. Nobody with a real estate background got anywhere near a name like Northwest Goldberg. It’s damn refreshing.

As you zero in on the hotter areas, you’ll notice that the forces of marketing have won big in the mid-city area. It appears that, as far as Detroit is concerned, the Midtown real estate juggernaut has engulfed and consumed the Cass Corridor, much like a white blood cell devours an undesirable microbe. In fact, the ligature now known as Midtown stretches far beyond the university area: south all the way to the freeway, and even a block east of Woodward. But the most impressive feat is the way Corktown has metastasized into a larger “North Corktown,” right where the downmarket Briggs neighborhood was. (Watch out “Core City” — you’re next!)

One exceedingly odd thing about the map is that it has designated a part of downtown as Foxtown that consists of Ford Field and the justice campus, and even excludes the Fox Theatre and Comerica Park. This is almost certainly an error.

There are some decisions on the map to be grateful for, among them, the choice to leave out some of the more feverish imaginings of Olympia’s marketing department, that is to say “The District: Detroit” is not acknowledged. Also, thankfully missing is a precocious little gag name — Noham — for the neighborhood north of Hamtramck. Banglatown is a perfectly find name for the eastern half of that neighborhood, given the predominance of immigrants from Bangladesh. (Please, let’s leave the cutesy nicknames to the real estate people. No need to try coming up with them ourselves.)

It all just goes to show you how, even on a relatively tame city map, neighborhood names and boundaries can sometimes feel a bit like battle flags and skirmish lines. We’d be willing to bet that several readers of this piece, mousing around on the map, have found a thing or two to take issue with.

Don’t complain to us. We hear that the best way to bring up anything on the map is to go through your district representative. And they’ll probably wonder why you’re calling their office about a name on a map when you could be volunteering or starting a block club?

But that’s the way things go, right? What’s in a name? When it’s yours, plenty.