When it comes to looking back on what went down in Detroit in late July of 1967, the fable of the blind men and the elephant was never more apt. Depending on who you are – and where you live – chances are there are people who register what happened very differently from the way you do. It's the sort of situation where people are not only likely to disagree, but just as unlikely to see the full truth of the matter.

So as we head into a summer that looks to be chock-full of recollections of our city's deadliest incident of “public disorder,” it's important to ask: How do you take a tumultuous flashpoint in Detroit's history and present it for discussion when there are such widely different takes on it? As in: You can’t even get most people to agree on what to call it?

Those are the sorts of dilemmas faced by the the many local organizations preparing to mark 50 years since tanks rolled down the streets of Detroit..

Fortunately, one local organization has provided something of a roadmap for us all to get there: It's the Detroit 67: Perspectives exhibit at the Detroit Historical Museum.

The exhibit acknowledges right in the title that there is more than one perspective. In spirit, it invites people of all perspectives to come together, to see, hear, and feel how other may have experienced it. It seems driven by the hope that, 50 years later, Detroiters of all stripes can discuss those different standpoints, see if they are borne out by the facts, and maybe even learn something new.

Upon entering the exhibit, attendees will find themselves confronted with many names 1967 goes by: Civil strife, crisis, disorder, disturbance, eruption, insurrection, melee, rampage, rebellion, revolution, riot, and uprising. The exhibit acknowledges them all without raising one above the others. At the very least, it shows how, from the media to the man on the street, the words we use color our perceptions.

The next area invites the public to survey the half-century preceding 1967, how the Great Migration of African-Americans fleeing the South in search of social and economic freedom changed and challenged Detroit like no other Northern city. It also offers a finer-grained view of the frustrations in the immediate run-up to the summer of '67, including segregation in labor, housing, and schooling, and an unfair, unrepresentative police department that resisted even token changes. It's a neutral presentation of fact.

But when the exhibit gets to the fire, the shooting, and the looting, those perceptions loom larger and larger.

One space simulates a midcentury modern living room of a suburban-style home, with a picture of JFK on the wall, a front lawn out the window, and a rotary-dial Michigan Bell phone on the credenza. A couch faces a bay of three televisions showing actual news coverage from that week. It's a clever bit of “political positioning,” acknowledging how most Metro Detroiters experienced the event through the prism of mass media. A nearby wall board reminds attendees that they will see no female journalists, no journalists of color, no shots of whites looting or being incarcerated, and no minority law enforcement.

In the corner of one room, a bit of technical magic presents a compelling, street-level view of things: A storefront stocked with wares is projected onto the wall, with shadows of people walking by. In short order, the window shatters as the sound of breaking glass fills the air. Those silhouettes of pedestrians stop to mill in front of the goods, the temptation finally proving irresistible as the display is cleaned out. Eventually, flames consume the looted store. It's a neat trick, sound effects and all, and has to be seen to be appreciated. 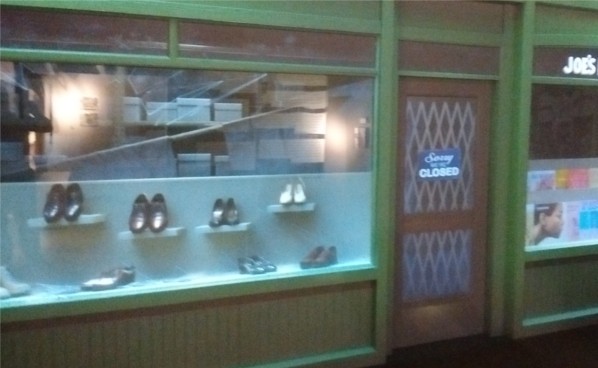 A cutaway of a tank occupies the center of one room, and screens on the inside show artful drawings on three panels that illustrate oral histories collected for the exhibit. On the outside, however, is your opportunity to take a selfie with a Sherman, so to speak.

The rest of the exhibit shows how changes in government and policy began to address many of the root causes of the riot, as people and perspectives that had been shut out began to be heard. It's a story that deserves to be told again, how many good people at all levels of society came together in the aftermath hoping to find a way forward.

Most importantly, the exhibit asks those who visit for what they have to say. There's a time capsule of sorts, where attendees can write their comments and have them viewed by the Detroiters of the far-off year of 2067. There's even an interactive quiz, enabling you to see how your perceptions stack up against those of others who have viewed the exhibit. Near the exit is a cozy chill-out space where attendees can sit down, speak with one another, and even compare their own views.

In short, it's utterly unlike the exhibitions typically mounted at the Detroit Historical Museum, which have tended to present artifacts and use note boards to tell the story. Detroit 67 uses some high-tech tricks, including touch-screens that help walk you through the story. But it's also quite an experience: When you're in the thick of the thing, hearing sirens, glass breaking, and frantic reporters describing the action, it begins to feel just the slightest bit jarring – as it should. 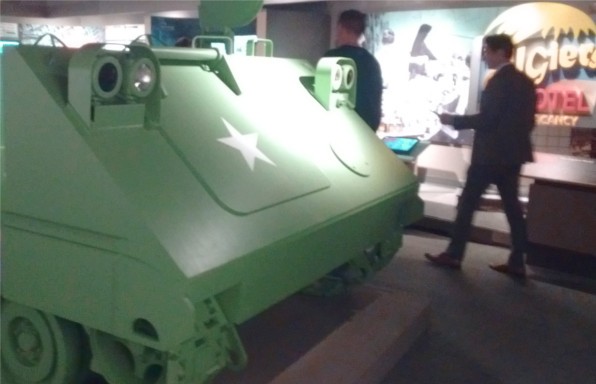 Much of the credit for the exhibit is due to Marlowe Stoudamire, born and raised on the east side of Detroit, a Cass Tech grad who went on to become chief of staff at Skillman. As director of the 67 project, he has been at the center of its creation for five years, working with community, internal staff, funders, corporate partners, and board members to create something that would resonate with as many people as possible – and avoid stepping on any of the topic's many land mines.

“The exhibition is not a commemoration,” Stoudamire tells us. “It provides people with multiple perspectives about what happened before 1967, what happened during that time, what occurred after, and more importantly how to connect people to opportunities to move Detroit forward in the future.”

It's not about celebration or commemoration, Stoudamire says, but our duty to recognize what happened here.

“It's an opportunity for us to come together and get a baseline understanding of our collective history and let multiple voices and perspectives tell what really happened here,” he says. “We’re not commemorating or celebrating anything. But you have to acknowledge the fact that it’s been 50 years, and this is a critical, pivotal opportunity, as well as a responsibility.

“Fifty years later, people are paying attention, the world is watching us. Detroit is a classroom. So do we let them tell the story or do we tell it? Do we invite the community in and give their voices a place to live in perpetuity?”

Stoudamire says that community engagement paid off big-time. He says it consisted of “unlikely conversations with unusual suspects.”

“We gave people a chance in safe environments to say what they mean, to get it off their chest," he says. "We brought in people with expertise with race relations, historians, we developed a relationship with the Detroit Police Department. We made an effort to leave no stone unturned in making sure all the voices had either had a chance to listen, ask, or learn.”

No small task when, as Stoudamire notes, “there were people who lived on the same block who didn’t experience it the same way and don’t define it the same way.” And by offering various views – supported by the facts – he hopes visitors gain something, if only an appreciation of how others see things.

“We’re not defining it for you. We’re providing the information,” he says. “You can’t have a project this big and skate around some of the hard facts and realities of what happened. But there’s also some mythbusting in this exhibition to tell you what didn’t happen. It wasn’t a race riot. Coleman Young was not in office. … It wasn’t just black folks.”

“It’s really deep and it’s not a laughing matter and it’s not something that needs to be celebrated,” he says. “But it happened, and the story needs to be told – and the conversations need to be had.