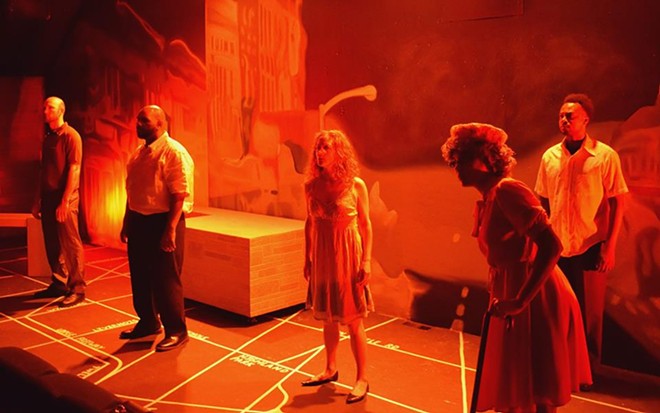 As we head into July and hit the half-century mark since the streets of Detroit filled up with police-defying crowds, the National Guard, and finally the U.S. Army, we can expect to see a number of different looks back on the summer of 1967. We’ve already seen the new exhibit at the Detroit Historical Museum. And more exhibits are coming, from Say it Loud at the Charles H. Wright Museum of African American History to Flashpoint: Detroit 1967 at the Lorenzo Cultural Center at Macomb Community College. Satori Shakoor will host a night of shared true stories at the Wright, and the Michigan Coalition for Human Rights will also offer a discussion, as well as a tour (call 313-405-2185 or email for more info.)
As for dramatic treatments of the event, as we’ve noted, Kathryn Bigelow’s film Detroit debuts July 25 at the Fox Theatre. But the small stage also offers a couple performances that should be noted. In both cases, the stories are taken from the mouths of those who lived through the events of that summer.

One production that has already met with much success is Dream Deferred: Detroit, 1967, at the Matrix Theatre in Southwest Detroit. Based on recording made in the immediate aftermath by Dr. Xavier Nicholas, now a retired professor at Tuskegee University.
If not for Nicholas, the play would never have happened. In 1967, as a student, Nicholas became aware that he was watching history take place. The moment of the events inspired him to go out with a reel-to-reel recorder and interview dozens of people.
The interviews included such subjects as a nurse, a cop, a guardsman, a soldier, a community activist, a looter, one of the injured, a reporter, and even Gov. George Romney. He approached the Matrix theater and worked with director David Wolber and Megan Buckley-Ball to create the 90-minute show. It now has been extended for a second and final weekend.

From playwright, actor, and MSU professor Lisa Biggs comes After/Life, “the untold story of the roles of women and girls who took part in the ’67 rebellion.” The script was developed by students and Detroit residents via a college course, and it gets four performances later this month, with a cast of Detroit actors.
Biggs said she was struck by the silence around female participation: “They were pictured right alongside the men and boys on the streets. They put their bodies on the line, but from many written accounts you would never know it.” Indeed, women were represented among those arrested (887 women and 83 girls) and those killed (two women and one 4-year-old girl).
Blending oral histories, poetry, and dance, the performance bills itself as a way to show how these women rebels “worked to transform the city into a more … equitable space for all" — which sounds hopeful and uplifting.