Murals in the Market will expand beyond Eastern Market 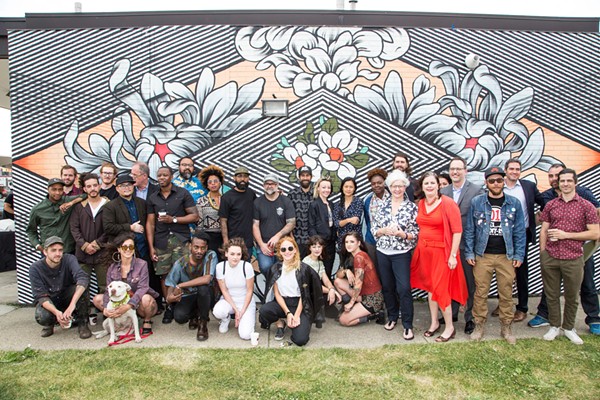 Now in its third year, Detroit's annual Murals in the Market festival is set to expand beyond its original Eastern Market footprint.

Festival organizer Jesse Cory tells Metro Times that this year, Murals in the Market — which has seen local, national, and international artists transform Detroit's Eastern Market district with murals and other art installations — will kick off on Wednesday, Sept. 6 with new works planned in farmers markets throughout the city.

See photos from last year's Murals in the Market here.

"We're super excited to work on the community markets. That was something that Dan Carmody from Eastern Market was really interested in," Cory says. "He wanted to get people talking about these other markets. So what better way to do it than through this context?"

The main festival kicks off on Friday, Sept. 22 with live painting in Eastern Market. This year, some 50 artists will participate, including FEL3000ft from Detroit, Bask from St. Petersburg, Woes from Los Angeles, and Michael Vasquez from Miami — among many others.

On Saturday, Sept. 23, an official afterparty will include live music by Egyptian Lover, Waajeed, Will Sessions & Amp Fiddler at the former Stroh's Warehouse in Detroit’s Eastern Market. The 1xRun warehouse at 1550 Winder St. will feature an installation by Haute To Death and a solo exhibition from Oakland, Calif.-based Eddie Colla. In addition, the festival will also host guided walking tours of the artwork, artist talks, and more.

Painting will continue through Thursday, Sept. 28. Murals in the Market dovetails with a month of other design-related festivities in September, including the Detroit Design Festival and the Dlectricity festival of lights. In 2015, Detroit was designated as a "city of design" by the United Nations Educational, Scientific and Cultural Organization — the first American city to get such a distinction.

The full Murals in the Market schedule can be found at muralsinthemarket.com.

The Scene Murals in the Market Detroit street art