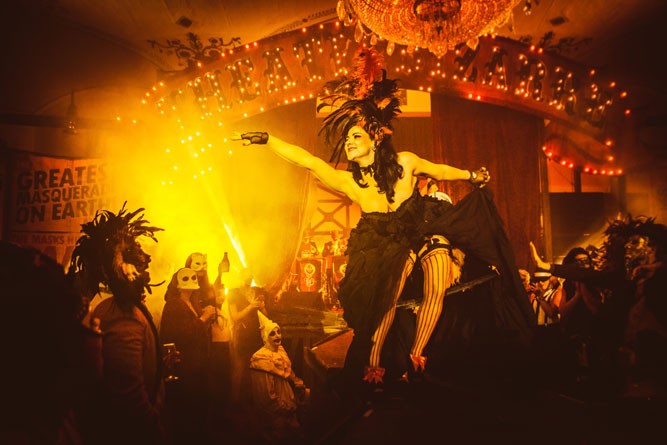 When Theatre Bizarre mastermind John Dunivant lists off what it takes to transform the grand Masonic Temple into the annual multi-floor, two-weekend Halloween extravaganza, it sounds like he’s listing the ingredients to a gargantuan witch’s potion: Thirty miles of electrical cables. More than a ton of candy corn. Another ton of other assorted candies. One thousand jack-o’-lanterns.

“We have truckloads of pumpkins being dropped off right now,” he says, pausing from construction work for a quick interview.

Dunivant and his crews have been working nonstop for the past two weeks, transforming the Masonic Temple — already a stunning, neo-gothic labyrinth — into a an elaborate, out-of-this-world party. It starts Friday, Oct. 13 with a sold-out Masquerade Gala, and continues Saturday, Oct. 14, Friday, Oct. 20, and Saturday, Oct. 21.

Despite the fact that we’re talking to Dunivant just two days before the event, he says there’s quite a ways to go. “A lot of last-minute things all happen at one time, when everything kind of bottlenecks because there’s so many rentals that can’t come in. Or there’s so many organic components like all the pumpkins, and gourds, and flowers, and things that can’t be in the middle for too long or they’ll wilt or rot,” he says.

Then there’s the new stuff. The Fistitorium — a kind of burlesque and fetish-themed room — is being moved to a new part of the building to help with the flow of people. “It’s become so popular that over the last few years the line has created such a problem for us and guests,” Dunivant says. “It was so bad it was blocking areas of the floor below and the floor above.”

So this year, Dunivant moved the Fistitorium to an unused dining room in the basement. “They call it a dining room, but it looks like a run-down abandoned cafeteria,” he says. “It’s pretty rough. So we’re trying to turn that into a sexy space. It’s been a challenge.”

Sure, there’s plenty of room to expand (Dunivant estimates Theatre Bizarre utilizes only 250,000 square-feet of space — about a quarter of the building.) But such an old structure poses its own challenges. They can’t draw power from the building itself — Dunivant is sure they’d fry its circuits. So they have to run their own electrical.

Yet in many ways, the venue is perfect for the party — which was forced to relocate from its origins as an underground party in a blighted neighborhood near the State Fairgrounds after the city shut then then-11-year-old event down in 2010 for violating a variety of ordinances. It quickly relocated to the Fillmore, and has since gone legit — calling the Masonic Temple home since 2011.

The building broke ground in the early 1920s. Even by today’s standards, it was a massive, ambitious project, and the project kept growing during construction.

Then, suddenly, the Great Depression hit, and work halted. An unfinished pool remains on the third floor, where piles of the original tiles remain, uninstalled. Work resumed in the late 1970s, but then another recession hit.

The mixture of opulence and unfinished, Dunivant says, makes for a truly spooky atmosphere. “It’s crazy. There are two moments in time when you wander around, if you’re looking for it, where people just stopped,” he says. “There’s areas where they were building walls and putting in moldings and finishing work and there’s hammers on the ground. And this was 40 years ago or whatever, and they just stopped again. It’s kind of eerie that they just dropped their tools, and it was never touched again.”

But the Masons’ loss is our gain — the Masonic Temple gives Dunivant, a visual artist and 2011 Kresge Fellowship recipient, plenty of room for his twisted imagination to run wild.

Of course, the event’s sheer size and popularity are perhaps its biggest challenges. Despite the fact that it typically sells out, Dunivant says it is not profitable. The total cost to put on the party, he says, is just under a million dollars.

“It’s pretty scary,” he says. “It’s a very fragile thing. Because the scale is so large, it’s bursting at the seams.”

But that doesn’t stop him and his crews of Halloween-heads from returning every year.

“We don’t know anything about making money. That’s the problem,” he says with a laugh.

“The scale of this thing is massive. There’s nothing else like it in the world.”

Theatre Bizarre starts Friday night at the Detroit Masonic Temple. Doors open at 6:30 p.m.; 500 Temple St., Detroit; theatrebizarre.com; That show is sold-out, but tickets are still available for the remaining nights — $260 for Friday, $95 for Saturday.