On Sunday, the Detroit Institute of Arts will present two new exhibitions bundled as one, featuring works by painters Claude Monet and Frederic Church.

Though Monet and Church were contemporaries, they were not a part of the same movement. Church was an American, while Monet was a Frenchman. But the two exhibitions augment one another in numerous ways. Both artists were landscape painters, and both were known for their dramatic use of light. Church was more of a mainstream, straightforward realistic painter, though the best of his time. Monet, on the other hand, was a rule-breaker, developing the seemingly loose and unfinished style that would come to be known as Impressionism.

"Monet was just developing his style, while Church was at the pinnacle of his career," says Jill Shaw, the DIA's associate curator for European Modern Art. "But you can see that Monet was reacting to landscape artists like Church."

Both artists have works in the DIA's permanent collection, which serve as the centerpieces and launching points of their respective exhibitions. For Monet: Framing Life, that work was formerly known as "Gladioli" and was re-titled as "Rounded Flower Bed (Corbeille de fleurs)" following new research done for this exhibition. For Monet's exhibition, "Rounded Flower Bed" is the show-stopper, presented in a room with a large, digital backdrop — placing the viewer in the environment where Monet created the plein-air painting. It's a simple trick, but it works.

The rest of the exhibition, which features just 11 paintings, explores the work Monet and fellow painter Pierre-Auguste Renoir created while living in the Paris suburb of Argenteuil in the 1870s.

Meanwhile, Church: A Painter's Pilgrimage is much larger and more grand in scope, focusing on paintings based on the artist's travels in the Middle East and Mediterranean, as exemplified by the permanent collection's "Syria by the Sea."

Though Church's paintings are pretty much the antithesis of Monet's — grand, hyperreal portraits of ruins, as opposed to Monet's loose, snapshot style — you can see the hints of Impressionism in Church's oil studies. 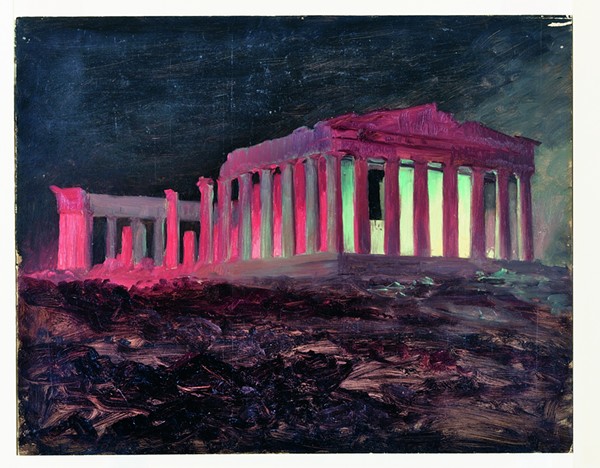 "I think both exhibitions complement each other extraordinarily well," says DIA director Salvador Salort-Pons. "Their visions as an American artist and a European artist at the same time, exploring different ways of creating art, for different markets — the contrast I think will help emphasize the beauty and the skill of Church and Monet."