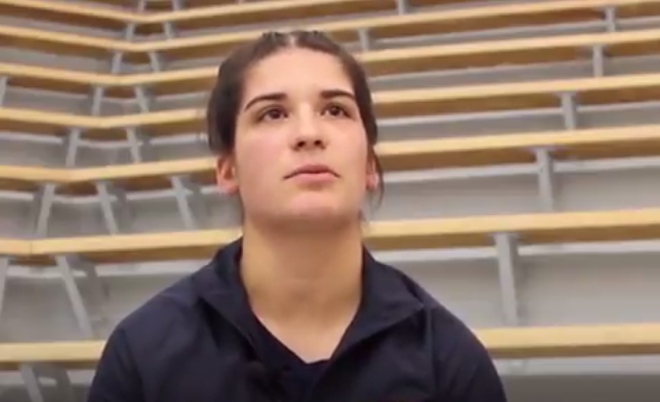 Earlier this year, we had written a splashy cover story about the female scholastic wrestling scene in Michigan. A big part of that story was female wrestlers were confronting sports officials who'd been slow to adjust to the reality that women are getting involved in wrestling in a big way.

That story had centered on the late Brent Harvey, a wrestling coach and promoter who believed that one major way to grow the sport in Michigan would be to create a girls' state wrestling championship. Harvey was no foe of females and males wrestling each other, but felt that the sport would benefit from a state tournament where girls wrestled with one another, and could emerge as a rightful state champion.

Last week, while Harvey's funeral was being held in metro Detroit, another female wrestling story had appeared in national headlines. It's the case of Marina Goocher, a college wrestler at the University of Michigan-Dearborn. Goocher has been wrestling since she was 5, and won hundreds of matches as a wrestler at Riverview High School. But the National Collegiate Wrestling Association (NCWA) prohibits women from wrestling men – even in practice matches. Since there are no other women wrestlers in the Great Lakes Conference, NCWA rules mean Goocher will have to sit out the season until the nationals. She can't even practice with her fellow male wrestlers.

The ACLU has taken up Goocher's cause, sending a letter to the governing association, and offers people the opportunity to support a petition asking that the NCWA discard rules based on antiquated stereotypes.

As we noted earlier this year, the wrestling world is changing, and women are some of the main wrestlers bringing fresh attention to the sport. When governing bodies resist change, such as allowing female tournaments or prohibiting intergender competition, it's the sport and all its athletes who suffer. It seems to us that anything that allows more people to join the sport, to compete, and to win, ultimately benefit everybody involved – except people who don't like change.

Also, it's heartening to see the ACLU take up this local challenge the very week female wrestling lost one of its strongest advocates in Michigan. We hope the national collegiate body does the right thing, and blows the whistle on its own outdated rules.