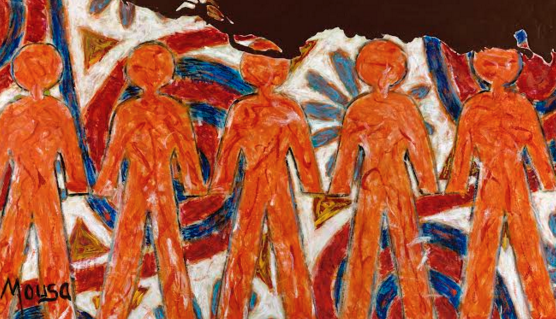 A new art show planned for the Arab American National Museum has a surprising issue at the center of it: LGBTQ+ rights here in the United States.

You don’t often hear about that civil rights fight in the contest of Arab peoples (although we’ve covered those issues together once before) so it’s especially interesting to see the museum offer not just a show but a community-wide dialogue associated with it.

At the center of it all is artist Nabil Mousa. Born in Syria but raised in a conservative Christian household in the United States, Mousa has an interesting vantage point to comment on politics and religion. His willingness to use art as a way to comment on the religious and political has met with some controversy, such as a work of his that was banned from a public building at Grand Rapids’ ArtPrize two years ago.

But the new show of his art, called American Landscape, which opens this weekend, is filled with the color orange, which Mousa uses to symbolize fear. ("Orange alert," anyone?) Same-sex characters link arms in fellowship against backdrops that suggest everything from nonfigurative Muslim art to the iconic American flag. The show’s organizers says, Mousa’s mixed-media series “challenges the perception of what it means to be American, and highlights the inherent diversity in our nation.”

But those perceptions will also be challenged by visitors to a special event on Saturday, Dec. 2. The event, called “Hikayat: Personal Narratives of Sexuality, Identity & Gender,” will welcome visitors into a storytelling workshop where they can build their own narratives focusing on topics of sexuality, gender, orientation, and identity. A ticketed live storytelling performance will feature talented local storytellers sharing their personal experiences with issues of sexuality, gender, and LGBTQ life.