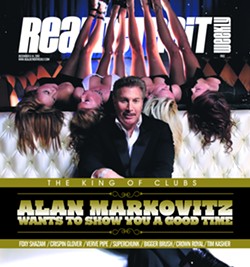 The story of the notorious Detroit strip club owner Alan Markovitz could come to the silver screen.

Previously, Markovitz made local and national news through a variety of exploits, including surviving two shootouts, earning the ire of the mob, and installing a 12-foot statue of a middle finger next door to his ex-wife's house in 2013. In 2014, he starred in a Cinemax reality television show also called Topless Prophet.