John Sims is a true Renaissance man, which seems fitting, considering he is an alumni of Detroit's Renaissance High School. Since then, Sims has gone on to have a career as a multimedia artist, writer, and producer — but even that is perhaps oversimplifying things. Over the years, his work has involved activism, mathematics, sculpture, music, poetry, performance, film, and curation.

We took the time to talk to Sims about his work and what to expect Thursday. 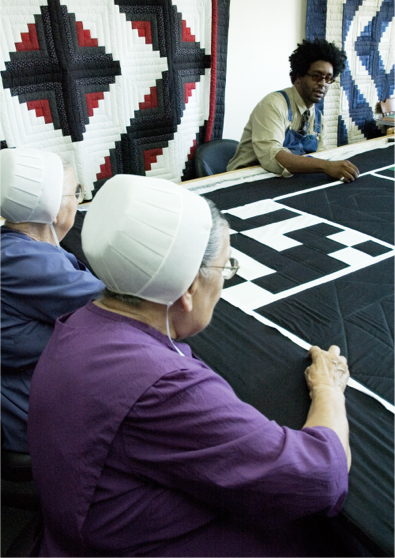 Metro Times: So is it safe to call you a multidisciplinary artist?

John Sims: At this point it's art, math, writing — I've been writing a lot, writing for Al Jazeera and CNN, that kind of thing — so that's been part of the activism as well. In my lecture, I'm going to present all of those elements and share these projects that I'm working on.

I'm going to present a history of various projects I've been working on for a while. One is sort of a math-art [project]. I've been working very actively in that, sort of culminating in an exhibition called SquareRoots: A Quilted Manifesto, which features 13 math-art quilts I did with Amish women in Sarasota. It also features pi-dresses, pi-quilts, and quilts based on Pythagorean mathematics. I did blues tracks leading up to the "Pi Day Anthem."

Each of these projects have a strong music, performance, and text context to it. And then there's also a performance featuring my alter ego, Johannes Curtis Schwarzenstein, theAfroGermanJewishMathArtPoet. I present that in German. That's a video piece. It's kind of my statement about connecting mathematics, art, and design — sort of an education-activism.

MT: You have also done a lot of work with the Confederate flag — long before the current national debate around it.

Sims: I had a show in Gettysburg where I featured a piece called the "The Proper Way to Hang a Confederate Flag." I hung it from an outdoor gallows, 13-feet high. But that got compromised from the Sons of Confederate Veterans, the Ku Klux Klan, and all the familiar forces that you might expect. They threatened to boycott the whole city and drain their tourism. The college where I did the show got scared and basically said I had to push the show indoors. But you know, you can't put a 13-foot gallows in a space that has only 9-foot ceilings. So I ended up doing a smaller version, and then boycotting my own show.

That got a lot of national press in 2004. So I was pushing this confederate flag stuff before it was a popular thing. I've been working on that for 16 years.

MT: I must confess I was very naive about the state of racism in this country until very recently.

Sims: I think the ideas of protecting the legacy of the Confederacy, the idea of white supremacy, these are ideas and realities that have been around for a long time. I just think that because of the internet and social media and the way news can proliferate and explode so quickly that people are forced to be more sensitive about it. And you also notice for the past two years the Confederate thing keeps coming in and out of the press. It's one of those things that just won't die. I think before the strong social media element people weren't really talking about it as much.

What I've learned through this whole process is there is a limit to how art can engage some of these political elements. Unfortunately, it took nine people to get shot before people [became aware]. Part of that has really inspired me to move beyond the protection of the gallery space into the spaces where real transformation happens — which is an emotional space, a spiritual space. And that can inform new language, and new ways of thinking about it, and hopefully new behavior. Very often with the art space, I'm speaking to the choir.

MT: Speaking to working in new spaces, what other projects are you working on?

Sims: I'm also working on a novel that's connected to a wine project. I ended up last year going to the south of France and teaming up with a wine-maker there. I created the "Square Root of Love Wine" that I introduced on Valentine's Day in Paris. And I connected that to a poetic response and a film. So it's poetry, film, wine, love... that kind of thing. I'll do that again this year, and develop that into a love festival kind of thing. The wine has poetry on the back, and then a QR code that takes you to a video based on the poetry.

MT: What projects do you have planned for Detroit?

Sims: There's an installation that I originally developed for New York City in 2000, 2001. The idea of having these objects and spreading them around the city, and each object is connected to some poet or poem element. I kind of got pushed into doing more of the flag stuff and the mathematical stuff, and after 9/11 I kind of pulled back from that project.

But I'm ready to revisit that work and I want to bring that piece to Detroit city, my hometown. The idea is that it's a citywide piece, TimeSculpturePoem: Detroit.

MT: Detroit public schools gets a bad rap. What was your experience like?

When I was in Detroit, I went to Renaissance High School, but I was also taking classes at the [vocational-technical school] right behind Renaissance. So I've always been connected to that.

I want to give a shout to Renaissance High, definitely. It prepared me, the critical science teachers and art teachers. My art teacher was very important. I had strong pulls in that, and then being able to connect to the vo-tech. So I kind of paved my way.

That idea of connecting the opposites, or the different parts of the brain, have informed all of my projects.

Sims will speak at 6:30 p.m. on Thursday, Dec. 7 at the Purdy-Kresge Library Auditorium at Wayne State University; 5265 Cass Ave., Detroit; Free and open to the public.