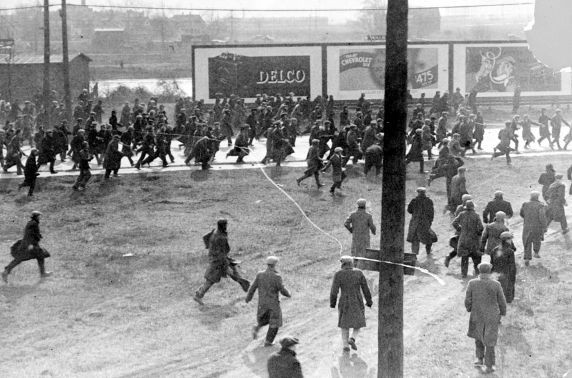 The Ford Hunger March isn’t exactly something you would fondly recall — like you might the Michigan State Fair or Kern’s Department Store. It’s more one of those things you should never forget: a cautionary tale about a society too tilted in favor of corporate overlords and unfairly rigged against their workers.

Here’s what happened: Eighty-six years ago today, on a brutally cold winter day in 1932, a couple years into the Great Depression, unemployed Ford workers took part in the “Ford Hunger March,” a procession of 3,000 men from the Detroit city line toward Ford’s Rouge Complex in Dearborn.

The Ford Service, billed as the “most powerful private police force in the world,” was ready for them. Ford Service boss Harry Bennett was a former prizefighter who assembled a rogue’s gallery of hired goons, washed-up athletes, and disgraced ex-cops, to knock heads for him and keep the union out at Ford. Now he and his roustabouts stood ready, bolstered by a complement of Dearborn police, armed with fire hoses, tear gas, and machine guns.

They opened fire on the protesters. Bennett himself was driven out in a car where he emptied two pistols into the crowd before he was pelted with rocks and knocked unconscious. When the smoke cleared, four protesters lay dead in the street, and dozens more were shot. Eventually a fifth protester died.

This wasn’t the end of anti-union violence at the plant. Five years later, on May 26, 1937, near Gate 4, Ford goons beat up UAW organizers passing out leaflets in what became known as "The Battle of the Overpass." Walter Reuther was slammed on the concrete seven times and kicked down two flights of concrete stairs. Another UAW organizer’s back was broken. Members of the women’s auxiliary of Local 174 were also passing out leaflets and were also attacked by the company thugs.

Unfortunately for Bennett and Ford, the violence was captured by a quick-thinking photographer and appeared in newspapers, proving damning to the Ford Motor Company. For his part, Bennett insisted the stories about his goons beating organizers were lies, that they were never involved. Right up until the Ford Motor Company was finally unionized in 1941, Bennett maintained that the union organizers really were “communist terrorists.”

Why mull over such ancient history today? Well, it was a defining battle of the 1930s war between workers and management, the poor and the rich, decent ordinary people and the armed-to-the-teeth forces of “law and order.” By the time the United States entered the Second World War in 1941, the biggest automakers were now all negotiating with their workforces, and workers had actual political power. The change from just a decade earlier couldn't have been more dramatic.

Maybe your parents or grandparents worked for UAW Local 600, or any of the other unionized shops, and enjoyed such gains as overtime pay or days off. Surely those things contributed to your well-being, even if nobody in your family set foot in an auto plant. Why? Because strong unions confer benefits on all workers. Besides, when unions are strong, bosses are less likely to organize gangs of criminals and police to shoot at them, right? 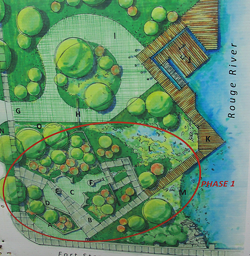 If you value those who made the ultimate sacrifice made on that cold day in 1932, you might consider honoring their memory with a donation to a park created in their name. It’s near a bridge on the Rouge River, and if that sounds weird, consider that the bridge is part of the statewide Iron Belle bike trail, and that the Rouge River has improved in quality so much that kayakers and canoeists now enjoy plying its waters. With a little more funding and some serious elbow grease, the former site of Brian's Bridge Cafe will be an interpretive nature park, with sculpture, a boardwalk, a rain garden, and a bioswale to help purify runoff from the buffer zone. It would appear to embody two things the labor movement has come to support: the environment and leisure.

Best of all, it will provide a kayak launch, where recreation-seekers can ply up the Rouge and see a 21st century view of the Ford plant, with its green roof, water-saving bioswales — and nary a machinegun in sight.

Click here to find a form allowing you to make a donation to the Ford Hunger March Park.