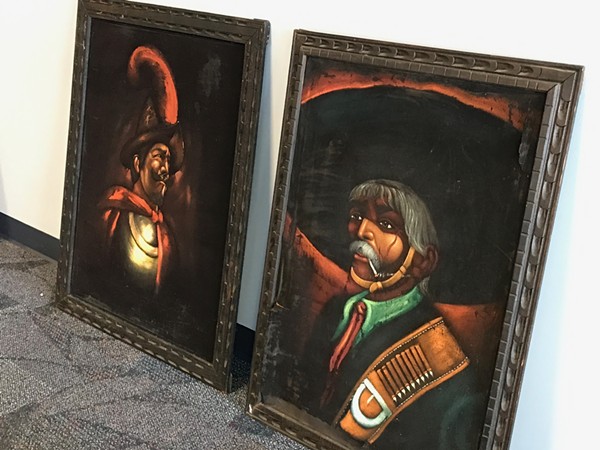 If you grew up with Mexican relatives, someone in your family likely had a black velvet painting in their house. Maybe it was of a donkey pulling a cart. Maybe it was of Pancho Villa. Still others will remember Elvis, John Wayne, or Marilyn Monroe as the subject of these dark artworks.

Black Velvet paintings have been around for a while, but they starting gaining popularity in the 1930s thanks to a guy named Edgar Leetag. He was a sign painter who bought some cheap velvet at the fabric store and went on to churn out as many as 17,000 paintings, creating a wave in popular art, ripples of which can still be felt today.

During the height of their popularity in the '50s and '60s, black velvet paintings were a staple in Midwestern homes, enjoyed as an in-fashion art. Basement tiki bars were adorned with tasteful nudes. Fireplace mantles were hung with grist mills or signs bearing the phrase "God bless this home."

Diana Rivera says she bought her first black velvet painting in 1973 at a Woolworth store in Lansing.

Rivera is one of three women curating a black velvet painting retrospective traveling around the state. Black Velvet Art, a Rasquache Aesthetic seeks to tell the story of how the art form went from an American favorite to being considered low-brow.

As the paintings went out of style, many lower income families began purchasing them at garage sales or estate sales. Thus, they went to live in homes where the average annual income was much lower.

Rivera describes the exhibit as "turning shame into pride," and likens growing up with black velvet paintings hung on the walls of your home to taking bean burritos to school for lunch. It meant you couldn't afford what the other kids had — what the whiter kids had.

"This exhibit is about turning shame into pride," Rivera says. "Most people would be embarrassed to admit they had a black velvet in their home."

The exhibit has been years in the making, according to Rivera. The idea was born during a seminar at Michigan State University. While making a speech about rasquache, co-curator Elena Herrada made aside to Rivera.

"During the seminar she stops and says, 'We're doing a black velvet exhibit,'" Rivera laughs. Nearly a decade later, the pair, along with Minerva Martinez, have amassed nearly 100 black velvet paintings from famous painters and local artists.

Those paintings will be on display at the Latino Cultural Center at the Mexicantown Welcome Center starting Saturday, March 17 at noon. They will remain on display until April 15, after which time they'll travel to Saginaw, Grand Rapids, and Adrian.

The exhibit will include paintings dating back to black velvet's heyday as well as newer works from local artists. During an opening reception, Rivera, Herrada, and Martinez will be on hand to discuss the cultural significance of the art works. That reception is scheduled for noon to 4 p.m on Saturday, March 17. The Latino Cultural Center is located at 2835 Bagley, Detroit Suite 600. Entry is free.