Dramatic photos of a fierce ass goose taking down a golfer in Adrian, Michigan are making the rounds on the internet.

According to the Blissfield School District's athletics department, the victim was a 16-year-old student named Isaac Couling who been golfing with his team near a goose nest. The department posted photos and the following play-by-play to Twitter:

"The golfers just finished teeing off and were walking down the fairway. To the left there was a goose nest and the golfers did a good job of avoiding it but the guard goose (hanging out on the far right) thought differently. The goose come from behind him and caught him off guard. He was keeping an eye on another goose at the time. He stood up after the 2nd picture and tripped trying to run away resulting in the 3rd picture." 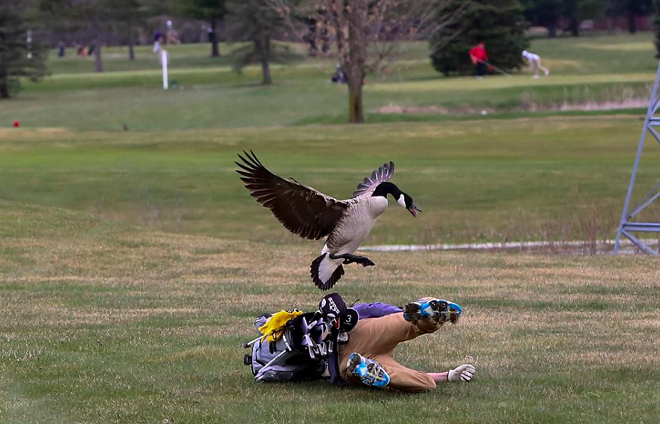 Our favorite part of this scene is the fact that the golf dad behind the camera lens, a man named Devon Pitts, just snapped photos. Though maybe that was a chill move because he could quite honestly have a future at National Geographic.

"Yeah, but no one came to help," Couling told the Detroit News with a laugh. "All the coaches saw it from the clubhouse. You could see it from there."

One of the coaches apparently showed the photos to his geometry class too. And now, people around the world have seen them, with more than 26,000 likes on Blissfield Athletics' tweet. The PGA Twitter account even picked it up.

The good-humored teen wasn't injured in the attack. The athletics department said on Twitter that the only thing hurt is "his pride."