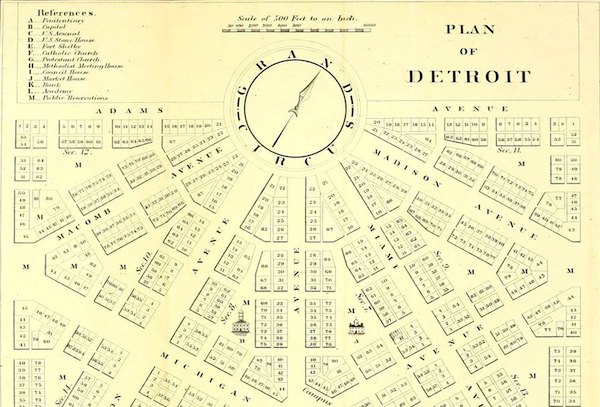 On June 11, 1805, a very interesting thing happened to Detroit: It burned almost completely to the ground, with a conflagration destroying the fort, barracks, and village, leaving 300 households homeless. Next week, we commemorate that calamity’s 213th anniversary.

But today is the 200th anniversary of the death of a greater city that only ever lived in the imagination. For all practical purposes, on this day the so-called “Woodward Plan” for greater Detroit was effectively abandoned. It would survive only in a few dozen blocks laid out downtown in the plan’s hexagonal, honeycomb style until it was finally cast aside in 1827. 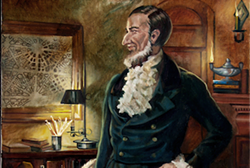 The story of that fanciful design begins in January of 1805, six months before the Great Fire of Detroit. In Washington, D.C., the federal government appointed 31-year-old Augustus Brevoort Woodward as a judge of Michigan Territory. It was fitting that the fledgling U.S. government chose Woodward, a scientifically minded man of 31, a youthful and eccentric leader who set little stock by precedent. Indeed as William Hull would later write to Thomas Jefferson, “Experience of past times is no lesson to him, and his ambition appears to be to surprise mankind by the singularity and novelty of his schemes.”

Woodward arrived in Detroit less than a month after the fire, the citizens in readiness to begin rebuilding the village. Woodward persuaded them to hold off, however, so officials could consider the best way to proceed. Preventing the spread of fire called for broad avenues and large lots, which Woodward ensured featured into his layout. Despite such practicalities, few could have probably imagined a plan more fantastic than the one he finally arrived at: a system of dividing land into triangles, allotting each landowner the same area but under the new configuration.

Woodward traveled to Washington that winter to obtain approval of the plan, then returned to Detroit to lay out an improved version of it over the summer of 1806. Surveyors worked out the plan on the ground into the fall, perfecting it. If it seems strange that the federal government would approve a honeycomb design for Detroit, consider that the capital itself was a newly minted city being built under the unique design of Pierre Charles L'Enfant, with broad, diagonal avenues slicing through its rectangular city blocks.

The complicated plan involved platting land in triangles. And though triangles were the basis of the plan, when completed with roads and alleys, it looked more like a honeycomb, with a repeating hexagonal motif. Broad thoroughfares would sluice throughout the city, with a “Grand Circus” at every major intersection, and smaller spaces reserved for public purposes. The scheme was also novel in that it had roads of different widths. The thoroughfares coursing through the city would be 200 feet wide lined with elliptical groves; secondary roads would be 120 feet wide and lined with trees; minor streets were still a generous 60 feet across. The slimmest streets were deep in the interior sections, where the noise of the city would find it hard to intrude. The plan even allowed for alleys.

The plan envisioned a city more organized than Washington, D.C., more beautiful than Paris, to provide for a vigorous commerce but to have secluded nooks and accessible gathering spaces. Most who examine the plan must conclude that Woodward was a marvelously gifted urban planner.

As a politician, however, Woodward was not as well endowed. The plan, of course, took more than a year to be drawn up, approved, and officially sanctioned. During all that time, the residents of the city were grumbling more loudly by the month, without clear title to land to build on, and increasingly distrustful of Woodward.

Although some parts of the city were laid out according to the judge's plan, as the years wore on, the dissatisfaction of residents eager for growth and the maneuvering of Woodward's peers continually threatened the plan's fate. In the 1810s, more immigrants began trickling into the city, and the federal government donated about 14 square miles of land — the so-called 10,000-acre tract — to be sold to these new settlers to fund civic improvements downtown. And yet for Woodward’s dream of a tightly organized metropolis to bear fruit, the plan would need to extend over the 10,000 acres. Hungry for growth and revenue, many appealed to the legislative board to sell land in rectangular allotments, rather than the triangular plots dictated by the plan. Woodward jockeyed judicially, introducing resolutions that no future deviations would be made. 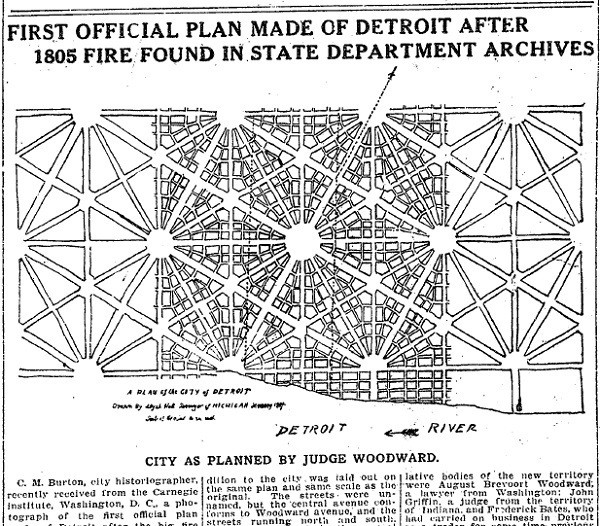 But in the fall of 1817, while Woodward was away in Washington, D.C., Judge James Witherell talked Territorial Governor Lewis Cass and Judge John Griffin into starting up the sale of right-angled 160-acre farms in the 10,000-acre tract north of the city. The sales were scheduled to begin 200 years ago, on June 1.

The complaint was in vain. Land sales were begun in sections with right angles, and the opportunity to create the grand city Woodward envisioned was permanently lost.

Looking back on that date almost two centuries later, we might look at Woodward's plan a bit more fondly than Detroiters of that day. In some places downtown, the plan can be physically appreciated. The broad thoroughfare of Woodward still has half of his Grand Circus, and it was quickly girdled by skyscrapers by the 1920s, many of which still stand today. Campus Martius, which 20 years ago was mostly concerned with routing traffic through downtown, has been reclaimed as a public space, and is now very lively. In the narrow, interior streets Woodward's plan allowed, you can still catch a bit of the intimacy amid a hectic city, as in Harmonie Park, where a small enclave of lush greenery is shielded by stately old buildings.

Indeed, from the year 2018, we might well wonder what Detroit would look like today if Woodward's plan hadn't been abandoned. Would the order have tamed the city's growth, or made it more desirable? Would it have prevented boom-time Detroit from plopping down vast factories surrounded by grids of bungalows? Wouldn't Detroit have had a built-in profusion of public parks and amenities? Could an overarching plan have prevented the divisions between the city and its suburbs? Would residents have been less likely to flee the city when every neighborhood was so carefully planned? Or might Detroit have been a model for other cities, a honeycomb pattern as an alternative to the waffle-iron grid most American cities adopted?

For a more in-depth appreciation of the rise and fall of the Woodward Plan, see writer Paul Sewick’s blogs about it, beginning with Part I.

An earlier version of this article appeared on Monday, June 1, 2015.