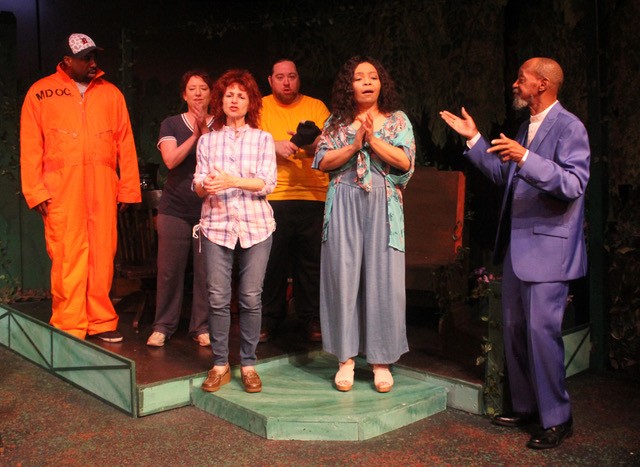 If you've never seen it, the Detroit Repertory Theatre, or "the Rep" as it's often known, will certainly strike you as one of those hidden Detroit gems that present a stark contrast to their depopulated surroundings. And yet the theater along a fading stretch of Woodrow Wilson Street has thrived for more than a half-century, staging several plays a year, including plenty of national premieres of topically important work. The theater was a pioneer of race-blind casting, and productions often trade in important social issues — but often the dramatic fare is all about making you laugh — even as you marvel at the quality sets, pitch-perfect lighting design, and a tight technical ensemble.

The play that opened last week and runs through June at the Rep, the Michigan premiere of Ghost Gardens, is all about bringing the laughter. The play is described as a story about the humor, grit, denial and delusion it takes to survive in an urban village. The playwright, native Detroiter and Chicago resident Steven Simoncic, calls the play a "survival story," and it's set in a hard-done-by hood much like the one the theater calls home.

"Our story takes place in a forgotten, underrepresented neighborhood in Detroit that is desperately seeking a reason to have hope," Simoncic says.

What's more, it's populated with people looking for a decent shot at one last chance. It just so happens that the people are on the zany side.

In this forgotten part of Detroit there is a pimp-turned-preacher looking for redemption, a laid-off factory worker with a deer tick in an unfortunate place, as well as a stripper-turned-nurse looking for justice — and an appearance on a local TV show. And then there's Lorelie, and all she's wanted for a decade is to have a baby — and today she announces she's finally preggers. Is this the glimmer of hope the neighborhood needs?