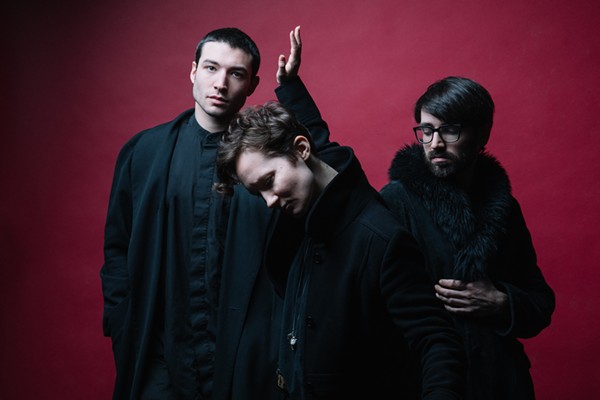 Ezra Miller, Lilah Larson, and Josh Aubin, the trio who make up Sons Of An Illustrious father, are on the road in support of their second album, Deus Sex Machina; or, Moving Slowly Beyond Nikola Tesla. They play on June 19 at Detroit's El Club, and we caught up with them just ahead of the show.

Metro Times: When I’m trying to tell people about your sound, I find myself rattling off a list of rock’s subgenres. There’s a lot going on. How do you describe it, and/or what do you set out to create?

Sons of an Illustrious Father: We really just set out to make something authentic to ourselves and our interests, but the genre-confusion you're experiencing and describing certainly seems to be part of the result. This phenomenon has led us to create many made-up, pun-based genre titles over time.

MT: I heard you all have been friends since middle school. How did you end up starting the band, and how does that factor into what Sons is?

Sons: Yes, it is true that we've known each other for a while. Lilah and Ezra met 14 years ago and have known Josh for 8 gorgeous, joshful years. Necessity was truly the mother of this band's invention. We survived some crucial stages of growth and development by forming this system of release valves and support beams we call a band. The family we know in each other is really the fountain from whence all our collective works do spring.

MT: Sons seems to make a lot of efforts to make its shows accessible to all ages. Why is that important to do?

Sons: We think and feel that music is for everyone and that shows should be accessible to as many sub-categories of human as possible. In our quest as a band to reflect this philosophy, accessibility for young folks seems like a great place to start, especially given the fact that music is often of paramount importance at a young age. It certainly was for us.

MT: Keeping some distance between Ezra’s acting career and the band might seem counterintuitive to some, though there are likely some pretty good reasons for it. Why do you do that?

Sons: Principally because our work itself has nothing to do with Ezra's work in film. We keep an even bigger distance between Josh's acting career and our music, honestly, but that's mostly just to avoid the mass panic that would result from the world learning that Josh is Steve Buscemi.

MT: Sons seems pretty outspoken on a lot of issues, especially gender politics, and you all are often described as activists. Why is that important to you? I think a lot of bands out there that have similar beliefs aren’t singing about social/political issues or could really be described as “activists."

Sons: More than we identify as activists, we identify as politically engaged individuals who want to show up for the many life-given opportunities to be the best beings we can be in the context of this complicated and imperiled world. Making art is one of those opportunities, and the one we are presently working to seize as a triumvirate.

MT: This is a pretty quick tour — what are you all up to for the rest of the summer?

Sons: Many things. As a band, we're playing several other shows throughout the summer, some of them for audiences. We'll also be doing some incubating and some festering in our own fecundity.

As separate people, Lilah will be continuing in her radical brewery and fermentation practices as well as playing some guitar for our beloved friend, the earth angel Lola Kirke. Ezra will travel east to continue his studies of the martial and mystical arts, while Josh will be working on Space Unknown, his mobile video game, as well suiting up to reprise his iconic role as Garland "The Marietta Mangler" Greene for the upcoming Con Air sequel, Con Air II: Return of The Con Air.

MT: What are the five best shows you’ve seen this year?

Sons: One Night Stand, who play at Madame's Organ in DC every Monday. Grey McMurray at The Owl in Brooklyn. The Americana Fest Pioneering Women of Country, Blues, & Folk at the Music Hall of Williamsburg. Springsteen on Broadway. Adahzeh at SXSW.