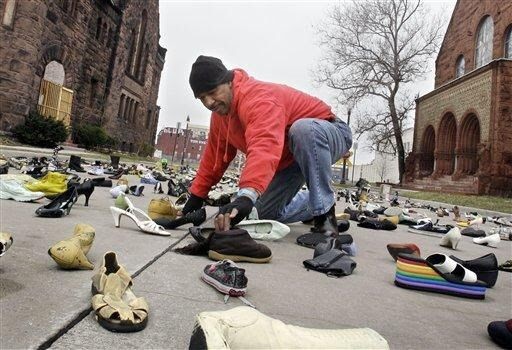 While artist Tyree Guyton has been quietly dismantling and consolidating his Heidelberg Project into a permanent museum, MOCAD is getting ready to host a pair of exhibitions of the artist's work later this year. 2+2=8: Thirty Years of Heidelberg will open to the public on Friday, Sept. 7, followed by Process on Saturday, Oct. 13.

2+2=8 will be a retrospective of Guyton's infamous neighborhood-sized found-object art installation in Detroit, and will also feature a new site-specific interactive installation constructed at MOCAD, according to a release. The exhibition title is a mantra that appeared throughout the Heidelberg Project: "What I'm saying here is two plus two equals eight," Guyton told us in 2014. "It's my way of redefining my reality and getting the people to catch up to it, to grow into it. It takes time. Here, we're creating something so radical, something so different, a lot of people are afraid of it."

Meanwhile, Process will be a multi-disciplinary solo exhibition that is set to include portraits, sketches, and photographs, highlighting Guyton's background as a fine artist.

From a press release:

"The brilliance of Tyree Guyton's Heidelberg Project and solo practice represents the best parts of art-making" says curator Jova Lynne reflecting on the artist's career. Lynne continues, "the nature in which Guyton produces brings together archive and imagination to disseminate a recipe for the future of our world. Weaving together city-archive, spirituality, and ideology, Guyton’s work stands as a beacon for creativity, determination, and survival. In this time of great uncertainty that we are living in, Guyton’s work is a timely equation for our future."


More information is available at mocadetroit.org.