Illustrator Norman Rockwell's Four Freedoms paintings are among the iconic illustrator's most well-known and impactful works, helping rally the nation during World War II (and getting endlessly parodied in the years since). And now, they're on view at the Henry Ford museum.

The paintings are the core of an exhibition entitled Enduring Ideals: Rockwell, Roosevelt & the Four Freedoms, which started in the artist's hometown of New York City and makes its second stop in Dearborn, opening to the public on Saturday.

As curator Jim McCabe explains, the exhibition provides historical context for the images. The origin of the concept of the Four Freedoms —"Freedom of Speech," 'Freedom of Worship," "Freedom from Want," and "Freedom From Fear" — came from a 1941 address to Congress by Franklin D. Roosevelt, as Europe was already embroiled in war but before the attacks on Pearl Harbor.

McCabe says Roosevelt was trying to shape aims of war, not as "sort of the typical goals of geographical or economic advances and gains against others," he says, but rather "trying to make the effort the war effort be part of creating a better world, a more just and peaceful world."

The concepts resonated with Rockwell, who originally pitched an image series to the U.S. government to help the war effort, but the idea didn't really gain traction. So instead, he went back to his editor at Saturday Evening Post, Ben Hibbs, who thought it was such a good idea that he took Rockwell off of all other assignments.

"It was a big step for The Post, which was really fairly conservative kind of rural-focused magazine," McCabe says. "But it was still probably the most popular weekly."

When the images were first published in 1943, they were an immediate success, with The Post getting swamped by requests for copies. (The paintings even traveled the country during a war bonds campaign, making a stop at department store in Detroit.) Despite Rockwell's reputation as making some of The Post's most memorable covers, the Four Freedoms illustrations did not appear on the front of the magazine. Instead, they appeared inside across multiple issues, accompanied by essays.

Rockwell, McCabe says, was not the first artist to try and visualize the Four Freedoms, but what he did do was help bring them to the masses, thanks in large part to his knack for clever visual storytelling.

"The genius of Rockwell's four paintings was that many of the other efforts kind of put the freedoms as kind of visionary goals and aspirational goals," McCabe says. Rockwell, however, depicted the freedoms as everyday events regular Americans could identify with — a man standing up in a town meeting, a family gathered for Thanksgiving dinner, people worshiping at Church, and parents tucking their child into bed.

"He was essentially saying, 'The freedoms are part of us. They are innate in us, and this is something that that is part of this that we need to do, we need to sort of fight for them and preserve them,'" McCabe says. 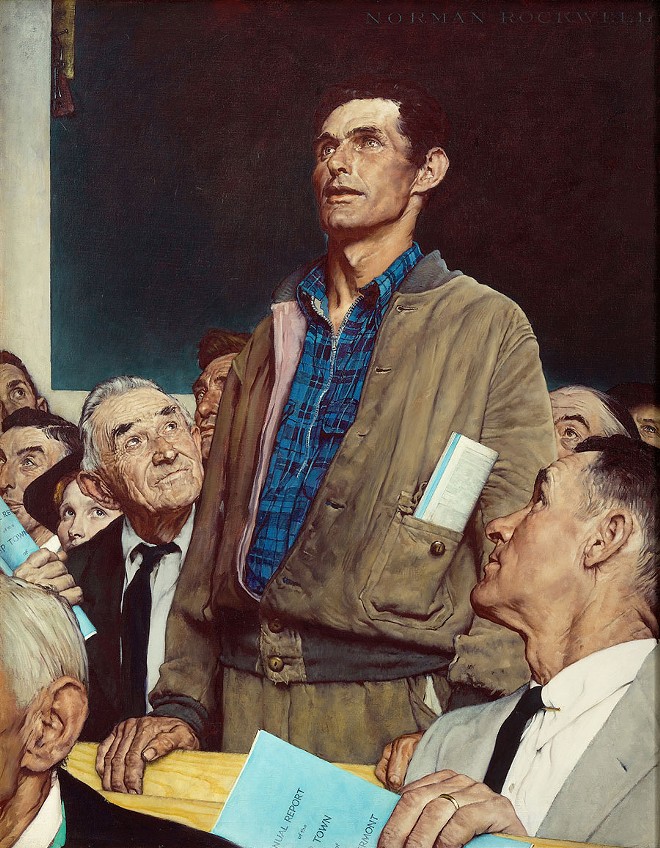 The images also helped propel the ideas of the Four Freedoms, which were adopted and expounded upon in the United Nations' Universal Declaration of Human Rights following World War II. And the images proved to be transformational not just for the country, but also for Rockwell, marking a shift from his more humorous illustrations to a more serious phase. That includes Rockwell's 1964 painting for Look magazine, "The Problem We All Live With," which depicts 6-year-old Ruby Bridges getting escorted by U.S. marshals to an all-white public school during New Orleans' school desegregation.

In keeping with the theme of the legacy of the images, the Henry Ford show also features a section that includes a group of around 30 contemporary works inspired by the Four Freedoms that look at what the freedoms mean today, and also explore the idea of a fifth freedom.

"One of the underlying ideas that exhibition is that imagery can change people's understanding of the world, and can you know, change the direct trajectory of kind of historical events," McCabe says. "And that that's why these images continue to resonate today."