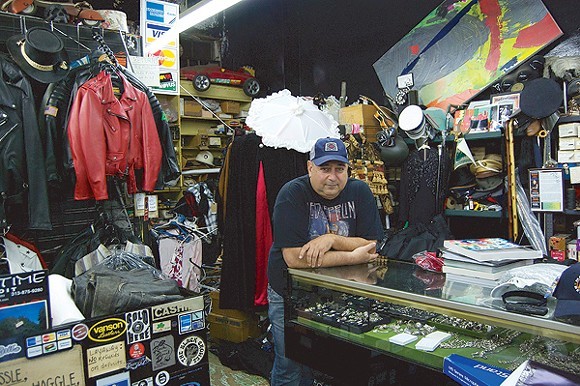 It will be three years in January since Dan Tatarian's longstanding clothing store, Showtime Clothing, closed its Midtown location. After nearly 30 years in business, Tatarian cited the changes in the city's culture, development, and the long construction of the QLine for a dip in his sales and disinterest in "New Detroit."

"The thing is, you know, people are people, right?" he says of the Cass Corridor's recent rejuvenation. "The problem lies with developers and people who want to make a profit. They're not concerned with the dynamic of a neighborhood. I'm not into displacing people."

Showtime leaves Midtown
Is Showtime moving to Hamtramck?
By Alexandra Fluegel
City Slang
While he awaits to relaunch his store, Tatarian, who still resides in Midtown, will feature some of his latest duds during Noel Night from noon-8 p.m. this Saturday at the Detroit Shipping Co. The pop-up will feature much of what Showtime had become known for — stagewear with a bohemian twist. This time around, Tatarian says he will sling a mix of mostly womens' clothing in the form of Marilyn Monroe screen-printed T-shirts, lace pieces, fringe, and items that fall under Tatarian's definition of "hippie chic" all ranging from $20 to $45.

The pop-up will be the first for Tatarian. "I don't do pop-ups," Tatarian says. "But it's close to my house and I know a lot of people show up for Noel Night, and I know the people at the Shipping Company and they're nice people."

Cass Corridor's Maya's Indo-Pak cuisine is moving to the former Showtime building
By Tom Perkins
Table and Bar
The event also serves as a re-entry as the wholesale clothier gears up for its 2019 reopening in Hamtramck, or as he calls it, "Hamtramck Rock City." The new space, Tatarian says, will only be open Fridays and Saturdays and will be a bit smaller than his Woodward Avenue spot, but have its own flare. His tentative plans for the new two-story location will involve the addition of a coffee shop and bar on the first floor which will boast a "modern '60s" feel." The upstairs mezzanine will be decked out in a "classic Italian" style. When asked why, Tatarian said the stylistic idea was forged in "his fucked up brain."

Detroit's Noel Night to ramp up security following last year's shooting
By Lee DeVito
News Hits
At the end of the day, though, Tatarian doesn't fault those interested in what he calls a "chi chi" lifestyle offered by the growing retail and housing options in Midtown and downtown. "I want everybody," he says of his desired clientele, which in the past was primarily geared toward Detroit's music community. "I want people living a real life instead of fantasy subsidized life."