Michigan's KKK reached its apex in the 1920s — here's why 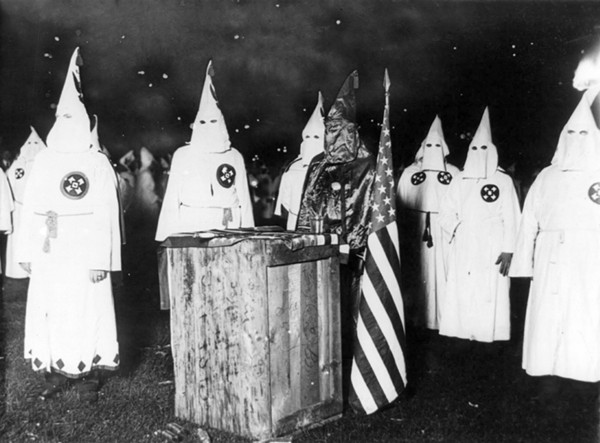 With neo-Nazis in the news a lot lately, it can seem like white supremacist groups are on the rise. Here in Michigan, for example, the Detroit-based National Socialist Movement made headlines for its involvement in the 2017 Charlottesville riot, and a violent clash broke out last year when Richard Spencer visited Michigan State University. But while the FBI has reported three straight years of rising hate crimes, Macomb County Community College professor Michael Placco points out that this all pales in comparison to the Ku Klux Klan of the 1920s, when the group was at its apex.

Placco — who teaches U.S., modern U.S., and Michigan history, and says he is distantly related to civil rights icon Viola Liuzzo — will discuss the rise of Michigan's KKK during the 1920s on Thursday at the Rochester Hills Public Library. We spoke with him by phone to learn more.

Metro Times: Why was the KKK on the rise during that time?

Michael Placco: Great question. Michigan was one of the ; I would say, three or four states in the country for the Klan in the late teens through the twenties. Indiana takes the cake with the biggest membership and the most dues-paying members, but Michigan and a lot of states in Midwest were fertile ground for this if you want to call it that.

The Klan of the '20s that takes root Michigan was not like the clan down south after the Civil War. This group that cropped up used the name, and maybe had the shared target of African-Americans, and maybe some of the ritualism, but this was a whole different new organization. It capitalized on a lot of people's fears at the dawn of the 20th century. America had just been through a lot.

I mean, sure, it was the roaring '20s. But you know, we had just gone through the progressive era where you see a rise in union membership. And that freaked out a lot of Americans, thinking that was the communists. Most importantly, and this is so often overlooked, the Klan of the 1920s was largely to the threat of the arrival of all the immigrants that had just come to the country. I mean it's going to hate African Americans, but you know, a lot of the segregation they felt had taken care of that problem. But the biggest threat was the recent arrival of what the Klan had called the "Romanists" and the "Semites," which was their way to speak of Catholics and Jews.

The group itself was , you know, blue American group. This was for the "native Americans," you know, the guys whose grandfathers had been at Gettysburg — the "real" Americans, the WASPs. And they were very concerned that America was changing with the labor unions. But here comes all these Romanists and Semites and you know, they're not WASPy. They bring Catholicism, they bring different languages, and clothes, and they're very exotic. There was also the concern that a lot of them, certainly with Michigan, were bringing in what was called by the Klan "tribal warfare." They were worried about, for example, the Italians bringing in the Black Hand and the Mafia. And then certainly here in southeast Michigan, they were really terrified of the Purple Gang and the Little Jewish Navy.

So why Michigan? Michigan takes in a lot of these people. Michigan is a very strong union place. And here comes these foreigners, and they're bringing booze, and the prostitution and they look weird. That's it in a nutshell.

MT: Howell is often erroneously referred to as the KKK capital of Michigan. Where did it really start?

Placco: The clan did not start here. The original idea for the Ku Klux Klan started up in Pulaski, Tennessee in the 1860s, right after the Civil War, when a bunch of ex-Confederates came up with an idea for a social club. They stole a lot of ideas from the Masons. A number of the guys had been in a Sigma Chi fraternity, and so they borrowed from it, too. But it largely went away after the Civil War. It was a southern thing and it really always had that kind of southern flavor to it. But the second Klan that I'm talking about, they came here and it just kind of exploded. It just came out of nothingness.

And one of the things that I think is so often overlooked is the idea that this Klan was also a cash machine. These guys were making money hand over fist. It was what we now call "multi-level marketing." You've got recruiters, you've got leaders, you've got people getting cuts of the money from memberships. And yeah, I mean, sure, it was racist. I'm sure these guys probably had those feelings, but again, they were making money hand over fist. They capitalized on so-called "native American" fears of the invasion of the "Papists," the Romanists, you know, the idea that they're more loyal to the Pope than they are to a country. [The Klan] provided a sense of belonging.

There was also a very specific event in Michigan history: The Bath School massacre in 1927, that is still known to this day after Columbine and Sandy Hook as the largest school incident in American history. It occurred just outside of Lansing. Andrew Kehoe, a corrupt school official who was also an Irish Catholic wired a truck with explosives, and he blew up a school and killed dozens of children. And you know, when the media caught up on that, it was, "Here as an Irish Catholic infiltrating our school system and killing our children. There you go. That's why we've got to watch out for Catholics."

MT: Tell us more about this "multi-level marketing" aspect of the Klan.

Placco: What was kind of ingenious about it is that this group had such a lot of people and different cells. They had like their own series of official souvenir companies. There were multiple magazines that they would sell, like a kid's magazine, a women's magazine, you name it. But then they also had like official catalogs where you could get the official Klan-endorsed robes. There were catalogs that would sell Klan music, Klan jewelry, brooches, hats, socks, toys for the kids. So you've got recruiters scouring the country, collecting memberships, and then you've got people who are buying magazines and toys. I mean there's a lot of money getting kicked up upstairs, and people getting cuts.

The Klan also had a lot of endorsements to it. I mean when, when they used to have rallies and festivals and parties, these were the big to-do in Michigan. Whether it was 4th of July or Memorial Day, the Klan would set up these carnivals. And at these carnivals, you'd have tent revivals. They would have the things you take your kids to, with pony rides and balloon rides and Ferris wheels and all the local businesses would sell their food. Then you also had . I have a couple of posters showing how the Ford Motor Company would sponsor the Klan, or Coca-Cola endorsed a couple of the Klan rallies.

MT: Do you have any figures to illuminate the scope of how much money we're talking about?

Placco: Well, you have at least one Klan chapter in every state in the union at the time, which was 48 of the states. Michigan's had several hundred thousand members at any given moment. Then dozens of what they called "Klaverns," like chapter houses, some in multiple counties. When you count up the main Klan and then the women's Klan and then the youth auxiliary "Klamps" for the kids, it was several hundred thousand.

The other thing too is it was so large and omnipresent. Even if you in your heart did not harbor some of those [racist] feelings, it was still kind of necessary because being a Klan member was something you aspired to. Having a Klan chapter in your town was something that you bragged about, like now if you have an Ikea or, you know, . But it was not met with resistance, because it was the thing that kept your community good. If you had an active Klan in your town, you knew that you wouldn't have to have "problems," whether it was drunken Indians, the Jews wouldn't take over, the Italians wouldn't be doing kidnappings and hits.


But then also on the other side of this Klan did do some acts of charity. It's shocking. They would have Klan parades. There were instances where people would have a fire in their home and the Klan would rebuild the home, or the Klan would drop off donations of food at shelters.

The Klan could also take care of things in your community that perhaps the law couldn't. So I mean, if you have a Jewish jeweler or you have a Chinese laundry, or two men are living together, you know, the Klan can take care of that when law enforcement cannot. And how would they do that was with violence, acts of intimidation, you name it. You know how we had those "flash mobs?" The Klan would do it, too. They would figure out a date and a time, and then they would just go mob a deli that was run by Jews, or they would go bust up a movie theater only because the movie theater was showing a "un-American" movie.

MT: Do you think the Klan could ever rise to that level of power again?

Placco: The idea of the Klan comes and goes as an idea every 20 or 30 years or so. But the biggest of all was of the '20s. I mean, that organization of the '20s was bigger than any of the other Klan incarnations before or since. This is a Klan that had national chapters, finances, and also had about every 10th person in the country as a member. It was embraced, it was celebrated.

Can that happen again? I mean, we have laws where you can't be doing those sorts of things, but then also I think people are a little bit more tolerant. I could be wrong, but I don't think as a country we will have an organization like this again. As far as what the Klan was in the '20s, I don't think that can happen again. I pray it can't happen again.