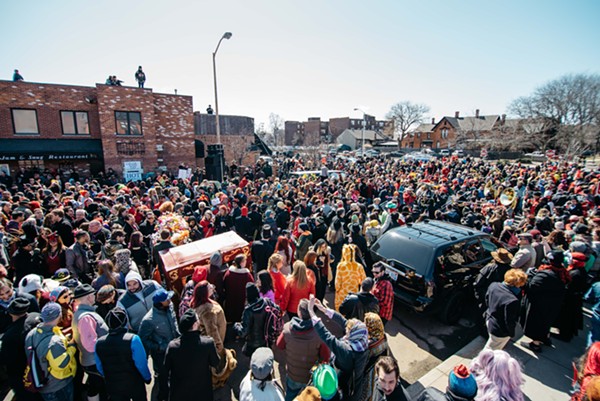 Details are set for Detroit's annual Marche du Nain Rouge, which returns Sunday, March 24 for its tenth year of chasing away the legendary "Red Dwarf" of Detroit folklore.

The party starts at noon on the corner of Second and Canfield Street (across from Traffic Jam & Snug). As in past years, partiers are encouraged to show up wearing black and red costumes — "disguises" so the Nain Rouge won't recognize you. The Nain Rouge then makes an appearance, taunting the crowd. Around 1 p.m., everyone chases the Nain down Cass Avenue to the steps of the Masonic Temple, where there's more taunting and finally, more partying.

The legend of the Nain Rouge is said to go back to 1701, when Antoine de la Mothe Cadillac founded Detroit. The short version of the tale is that Cadillac was attacked by the feared "Red Dwarf," who then cursed Cadillac and the city. (The truth is actually a bit more complicated: it's all outlined in a 2016 Metro Times cover story.) The parade was formed by then-WSU law school students Francis Grunow and Joe Uhl in 2009, who wanted to create a Detroit-style take on Mardis Gras. Apparently plenty of others wanted the same thing; the idea took off, and the event now draws thousands, featuring elaborate floats, New Orleans-style marching bands, Carribbean dancers, fire-breathers, and more.

The legend of the legend of Detroit’s Nain Rouge
Raising Nain
By Lee DeVito
Culture
From March 18 thru March 24, local businesses will offer deals and specials as part of a weeklong "Fete du Nain." Here's an initial list of offerings, with more information available at marchedunainrouge.com:

Blick Art Materials (4501 Woodward Ave., Detroit): Mention the Nain and get 20 percent off. You can also register to win a Nain Prize Pack filled with great Nain inspired items.
​
Detroit Shipping Co. (474 Peterboro St., Detroit): Drink specials all day during Marche du Nain Rouge, as well as live music and entertainment from 10 a.m. to 6 p.m. including the Bananacondas and Kelsie Cork & The Swigs, and DJ sets from DJ Jaco, Lady SSE, and Marcie Bolen.
​
Founder's Detroit (456 Charlotte St., Detroit): Party begins at 11 a.m. with red beers, grill specials on the patio, music from the the Aston Neighborhood Pleasure Club, and more.